The prime minister can't lead, and he doesn't want to. That would entail losing the smirk. So ordinary Australians will continue to suffer.

Given the disaster that is aged care in Australia — the ongoing misery so many senior Australians endure in substandard care in an industry chronically underfunded and under-resourced — surely we would get a break from the prime minister’s incessant focus on spin and presentation and get some substance?

Perhaps some acknowledgment of failure — not just, or even particularly, from the Morrison government, but an acknowledgment that all governments since the 1990s have failed grievously to properly provide for the sector?

After all, Morrison has only been prime minister since 2018 — he hardly carries the can for 30 years of policy failure.

Instead it was treated as just another political issue, to be given the special spin treatment that is the only thing Morrison and his office — the shabby outfit whose idea of responding to Brittany Higgins was to obfuscate, cover-up and smear — are good at, and which is their response to literally every issue. 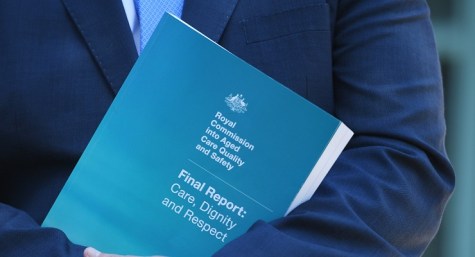 Journalists were summoned at short notice to Kirribilli House — not to the Blue Room or the PM’s courtyard in Canberra, or even the Commonwealth offices in Bligh Street — where the prime minister “released” the report, which was not available until shortly before he walked out to talk to the journalists who could make it over to North Sydney in time.

The Prime Minister’s Office (PMO) didn’t have enough time to make the report available, but it had enough time to cobble together a hopelessly inadequate filler announcement: $450 million for “immediate priorities”, nearly half of which was a handout to service providers “to provide stability and maintain services while the government considers the recommendations”.

The wholly discredited Aged Care Quality and Safety Commission, which both commissions want given the flick, would get an additional “assistant commissioner”.

We’ve seen what happened with the banking royal commission: enthusiastic embrace followed by legislative reluctance followed by wholesale walking back. This time the government is only “considering” the recommendations in the first place.

All this for a report that was utterly damning of governments and the way they immiserated senior Australians in residential aged care for decades.

The challenges of the report — to fundamentally overhaul the philosophy, governance, funding, legislation, administration and regulation of one of Australia’s biggest industries, along with the small matter of the billions in extra funding needed to make up for years of neglect — are profound, a years-long endeavour that would test any government.

Who has confidence Morrison is up to the job? Who thinks Morrison’s response will be anything more than more announcements like yesterday’s, while nothing substantial ever happens?

This is the man who began the political year announcing he was done with doing anything hard in policy terms. This is the man who, in the weeks since the Higgins revelations emerged, has treated even the most serious issues in completely political, partisan terms. A man who cannot lead.

Had he even read any of the royal commission report, and digested just how damning it was of the business-as-usual approach successive governments had taken? Or had he just read the PMO briefing with its talking points about what announceables and key messages he needed to get across — confident that journalists wouldn’t have been able to ask him about the commissioners’ views?

The prime minister stands at the lectern and announces and intones, but nothing ever happens except whatever is needed to meet the political demands of the day. Policy, leadership, actual substance — doing difficult things — are all beyond him.

Morrison’s a smirking absence where the nation’s leader should be. He’s the discount price tag instead of the product, a TV advertisement idea of a PM, who might have greeted Lara Bingle on a beach in a shitty tourism ad. Meantime Australia’s seniors face the grim reality of a system wholly unfit for purpose in which they’ll have to spend their final months and years. 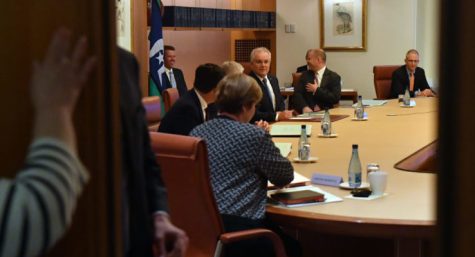 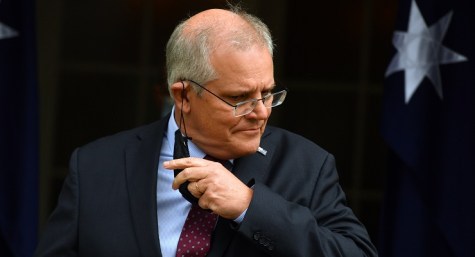 Hoarding RATs: is Morrison lying about something he should actually be doing?

Yes indeed.
This isn’t a PM or a Government. This is a crisis management team led by a bag of hot air.

And a cheap suit at that!

Wot! No Armani? He must have got it AT LOWES!

And we keep thinking he can’t get any Lower ….

You can also buy at Lowes pointy toe black shoes cheaply…that curl up at the toes when you have done some miles. You can get easy credit as well.

A cheap, empty suit with a wide yellow stripe down the back.

yup, the only hose Scomo is willing to hold is his own

I think he will also be holding someone else’s tomorrow. Mateship, the Australian parliamentary way – How good is that!

I remember when he was SS minister and journalists said he was a great communicator, so I tuned in they were wrong and as a leader zippo no plan no road map no leadership and wait for the budget? He played word bingo with the aged care RC report?

Cranky as a cut snake
Reply to  Mullet

A bespoke $20,000 suit, filled with a bloated sack of protoplasm. Praise the lard.

I value my time so I would not have travelled to North Sydney to listen to ‘PM”. My position is that If I wanted to hear from an arsehole I would stand back then ask somebody to fart

Bottom line is that he could not care less about our seniors.

Or a anybody else.

A bit unfair. As he said, he looks after his mates.

He definitely does care about himself.

Only cares about fellow grifters

That’s religion for you.

This smirking arse-hat is a disgrace to the term “Honorable” in his title.
He has no agenda, no plan & no idea how to govern a country that’s in crisis.
Bring on a FEDERAL ICAC to sort out all these lying thieves & corrupt pigs that sit in OUR parliament house NOW!!

Totally agree and all the while funnelling public money to mates/donors and using it to fund the next Liberal and National Party election campaign.

I’m reminded of the term “pigs in a palace ” when I see this lot swaggering around parliament house.

The ones who will not even stop our armaments industry supplying weapons for Saudi Arabia for use in Yemen.

It’s a wonder Scott hasn’t gone to Saudi to do a sword dance.