The latest power-grab by the Myanmar military — one of the world's most secretive armed forces — has confused many observers inside and outside the country.

Myanmar’s remarkable campaign of civil disobedience continues to escalate, with mass street protests and a general strike across the country this week in the wake of the military’s February 1 coup.

But few are expecting any civilian uprising to succeed in the face of a pervasive military, known as the Tatmadaw, which has proven unable to cede power despite a program of reform.

Arrests have continued and troops have moved into the country’s main cities, with occasional reports of violence. The military has warned of potential “loss of life” if the marches continue.

A military in control

Military leader General Min Aung Hlaing, 64, sits atop the 12th largest standing military force in the world, with an estimated 406,000 personnel in its army, navy and air force.

The Tatmadaw is also one of the world’s most secretive militaries, with even the closest observers inside and outside the nation confused by the logic that has driven both its actions and appointments.

The coup itself has been a particular point of confusion. The Tatmadaw has always been the senior partner in the power-sharing arrangement of the country’s 2008 constitution, put in place for the country’s first post-junta general election in 2010.

Under the constitution, it has retained control of the key ministries of defence, border affairs and home affairs, which has carriage of Myanmar’s budget and runs every organ of government in the country.

Newly installed President Myint Swe, a former chief minister of Yangon, is said to be close to former junta leader Than Shwe, who ran Myanmar from 1992 to 2011.

The Myanmar military does not just control its armed forces but the country’s police force, its paramilitary and a sprawling “people’s militia” that can be called on by the generals.

This left Aung San Suu Kyi’s National League for Democracy (NLD), which appeared set for another five years as the acceptable civilian face of the Myanmar government, to look after the economy and the daily running of public services in the country.

Who is Min Aung Hlaing?

A range of reports have labelled Min Aung Hlaing as having been an unassuming cadet at the elite Defence Services Academy, the breeding ground for the Tatmadaw’s top brass, who only gained entrance at his third attempt aged 19. Prior to this he had studied law for two years.

But he proved adept at working the system in the rigidly structured organisations, regularly gaining promotion. He was fortunate to have been posted to the battalion of Than Shwe.

Min Aung Hlaing’s success in cleaning up the Myanmar National Democratic Alliance Army insurgent group on the Chinese border in 2009 saw him chosen by Than Shwe to replace him as head of the military as the Tatmadaw transitioned to Myanmar’s power-sharing system.

Several UN agencies have recommended that he and other generals be prosecuted for overseeing the displacement and genocide of the Rohingya in 2017.

Armed ethnic groups around Myanmar have been a constant thorn in the side of the Tatmadaw, with serial civil wars roiling the nation’s vast mountain regions. The battle is as much over regional sovereignty for ethnic groups as it is the lucrative border trade with neighbouring nations, especially China and Thailand, in gems, teak, resources, heroin and more recently methamphetamine and water.

This trade, and the chunky ticket on it that the military clips, has been a significant source of wealth for the Tatmadaw. Indeed, the military has its grip on the nation’s business at the top level through two massive holding companies: Union of Myanmar Economic Holdings Limited, and Myanmar Economic Corporation, whose accounts are hidden and which control a number of sectors including tobacco.

Beyond that, military leaders and their families have their own business holdings. Min Aung Hlaing’s family are particularly wealthy — his son controls telecoms group Mytel and one of his daughters has splashed millions on her entry to the film world.

Indeed, military connections are often necessary in Myanmar for both locals and foreigners conducting business.

Then there’s the current and ex-military in government and bureaucracy. There are retired senior officers not just in the military’s own “civilian” party (the United Solidarity and Development Party, which saw its representation fall in the 2020 election), but also in the NLD.

Many of Than Shwe’s former cronies — both military and civilian — have drifted across to the NLD over the past decade, a stark illustration of both the complexity of the country’s politics and the confusion over the reasons for the coup.

In 2017 about 80% of senior civil service positions in Myanmar were filled by ex-servicemen and women.

The Tatmadaw is, according to people with experience inside and outside the organisation, a separate world somewhat removed from day-to-day realities. Its officers are trained to believe it is the lone saviour of a united Myanmar.

Still, Min Aung Hlaing must tread carefully. He is ruling over a people now used to some form of democracy and who have resolutely rejected the generals at two elections in five years. And if the country’s economy and the spigot of cash it funnels to the military and its mates collapses, there will be other factions inside the military waiting to move against him.

This has happened before in Myanmar, whose original dictator Ne Win — who executed the original 1962 coup that brought the Tatmadaw to power only 14 years after independence from the United Kingdom — was taken down in 1988.

Various successors between 1988 and 1992 also failed to last until Than Shwe asserted himself in 1992. The Tatmadaw may still be all powerful in Myanmar but history shows that it is fractured beneath the surface. 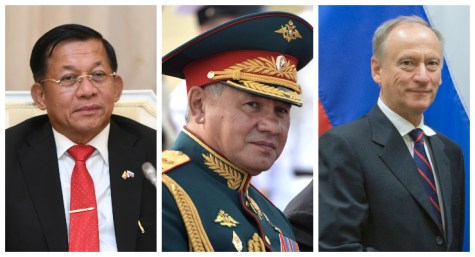 Min Aung Hlaing and the tatmadaw senior leadership have shown an unsurprising lack of imagination in their response to the pushback – even charging Suu Kyi with illegal communications equipment, a walkie talkie, which harks back to the old “illegal fax machine” charges of the 90s.
The difference between 1988 and now is that people now are all carrying phones/cameras. If the military shuts down all international communications, these phones will inevitably find their way to Thailand and any military brutality will be revealed for all the world to witness.
I like the poster that a lot of the young people are carrying, which reads “You’re messing with the wrong generation”.