Could political juggernauts Craig Kelly and Peter Evans be set to join forces? Plus more tips and murmurs from the Crikey bunker.

Invasion of privacy? Crikey has long been concerned with our personal data’s security under the various forms of surveillance (however justifiable) we’ve submitted to in aid of controlling and monitoring the spread of COVID-19.

A tipster tells us of a potentially worrying development with the Service NSW app:

I was told by my wife that one of her team (in a state govt agency not related to the app at all) was curious if he could use the data for aggregated analysis. Privacy statements say no, but he found much of the data accessible in the interagency data repository. He was able to see point-to-point data for individuals as he checked in at different addresses. In the multi-storey govt building in Parramatta he could see who had checked into each floor.

The tipster says this state government worker could apparently “see that records had not been deleted after the specified time period that they are supposedly going to be kept for”.

We asked Service NSW about this, and it insisted that “check-in information is securely held on a NSW government database and is deleted after 28 days. Access to customer contact information is restricted to authorised personnel in Service NSW and NSW Health for the purposes of contact tracing, and is not shared with third parties”.

Know more, either about this issue or something similar in other states? Let us know.

What a PAC of fools We’ll give them this: the irony experts at the Conservative Political Action Conference (CPAC) are not ones to rest on their laurels. Not content with spreading COVID-19 at last year’s instalment (an event where at least one speaker implied the whole coronavirus thing was a beat-up to drag Donald Trump down), they are now celebrating their 2021 “America Uncanceled” conference by … cancelling one of their speakers.

After discovering that rapper Young Pharaoh — described on the conference program as a “Philosopher, Scholar, Musician” — had left “purveyor of vile anti-Semitism” off his resume, CPAC cancelled his appearance on one of its panels. Pharaoh, also well schooled in the ways of irony, has described the decision as racist.

“We have just learned that someone we invited to CPAC has expressed reprehensible views that have no home with our conference or our organization,” CPAC tweeted.

Trump, who’s been known to share the odd racist conspiracy theory in his time, is still invited.

Being Frank The government no longer has to answer for Craig Kelly now that he’s sodded off to the crossbench, and we’re all excited to see what he comes out with now that he’s “free to speak his mind”. But in the meantime his attention is being taken up by the multiple investigations into his adviser Frank Zumbo.

Federal police and the Department of Finance are both investigating Zumbo for alleged inappropriate behaviour towards women (which Zumbo strenuously denies). It’s not the first time he’s been in the news — back in 2014 two workers in Kelly’s office went on worker’s compensation leave citing clashes with Zumbo.

Mind the GAP Still on Kelly: is he going to join another party before being ousted at the next election? Word is he’s been in talks with former One Nation senator Rod Culleton’s Great Australian Party (GAP).

Culleton was an early victim of the great section 44 purge of 2017 (remember that?) and has spent much of his time since pushing the conspiracy theory that all courts in Australia are invalid.

The GAP’s lead Senate candidate is, apparently, anti-vax conspiracy theorist Pete Evans. What we’re saying is, if this turns out to be true, Kelly would be right at home. 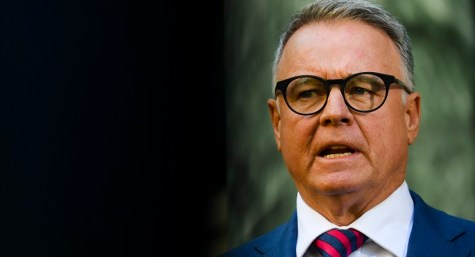 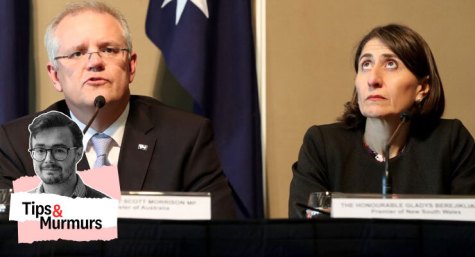 Is “conspiracy theory” the new mindless go-to term if you want to dismiss someone?

For instance, how in hell is this a “conspiracy theory”?

the conspiracy theory that all courts in Australia are invalid.

It’s a stupid argument that can (and should) be rationally countered, but it is NOT a conspiracy theory.

Someone could make a very long list of endemic misapplied and abused idiom, metaphor, analogy and so on in Australian journalism. It’s lazy and stupid, it’s often inaccurate, misleading or confusing, and it seems impossible to do anything about it. It seems fair to expect journalists to have some care and pride in their use of language as an essential tool of their craft, but there’s little evidence of it.

Can we add bad grammar and misspellings?

Typos belong to a distinct category, and I’m happy for perpetrators to get some slack except in professionally produced, edited and proof-read documents. To use the popular idiom, those in glass houses…

What do you consider a conspiracy theory to be?

A theory about a conspiracy.

The thing about the courts thing is nothing to do with a conspiracy, it’s a stupid misreading of various historical sources, real and imagined.

I take it none of you good folk have ever had this misfortune of being cornered by one of these sovereignty preachers in full flight – it is Conspiracy writ large!

The entire political/legal foundations are a front for covert repression of subjects etc.

Loving the naivity in your responses though – wish I could get back that wasted hour lost to that conspiracy junkie. Sheesh.

Jez, how many times? The court ruled he was never a senator. So whatever he might be, he’s not a former senator, or an ex-senator either.

Jez, for anyone interested, is meant to be Jeez.

Crikey, I mean Crumbs, thanks for clearing that up.

There must be a few conspiracy theories as to how such a prat like Kelly could get endorsed in the first place. Now, about Peter Dutton …..

“We have just learned that someone we invited to CPAC has expressed reprehensible views that have no home with our conference or our organization,” CPAC tweeted. This just made me spit on my computer screen with involuntary laughter!