The Morrison government had every chance to make sure a young staffer's complaints of alleged sexual assault were handled properly. They fell at every hurdle.

Just four weeks into her role as a junior federal government staffer, Brittany Higgins was allegedly raped in her new boss’ private office.

Parliament House should be well versed in dealing with cases of sexual harassment and assault following increased scrutiny after the Me Too movement.

But instead the government gave a textbook example of how not to respond, reaching a pinnacle this morning when Prime Minister Scott Morrison said that his wife, Jenny, had told him to think about the incident “as a father first. What would you want to happen if this were our girls?” 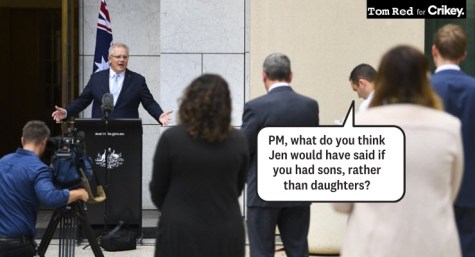 Social media blew up, imploring Morrison to show Higgins compassion on the grounds of her being a human.

Higgins’ alleged assault occurred after Friday night staff drinks in March 2019, weeks before Morrison called the election. She was 24.

She alleges a “rising star” staffer said he would share a taxi to get them both home, but instead took her back to Parliament House where he assaulted her while she was semi-conscious on a couch.

She was found by security the next morning.

1. Treating distress as a security breach

Canberra’s sleazy underbelly has repeatedly made headlines in recent years. So when a young, newly employed female staffer is found half-naked on a couch so unconscious she doesn’t wake up despite a security guard repeatedly yelling at her, alarm bells should be ringing. Instead her presence was treated as a security breach and her alleged rapist resigned.

“The tone of [the first meeting] was like a disciplinary meeting,” Higgins said. “I knew I was about to be in trouble.”

She reported the sexual assault during a second meeting with a senior Coalition staffer.

Criminal law expert and Associate Professor at the University of Wollongong Julia Quilter tells Crikey Higgins’ description of the event had many key aspects of sexual assault.

“Between 50 and 80% of matters involve intoxicated complainants or defendants,” she said. She also says Higgins’ unconscious state was another common aspect.

2. Not having a trauma-informed response

Officials appeared to go into damage control after Higgins’ complaint, asking if she would file a police report and, as Higgins said, repeating “standard lines”.

Quilter says a trauma-informed response was needed, which consists of putting the victim at the centre.

“This includes counselling, as well as the full availability and options of what to do,” she said.

“It would seem that the … supervisor may or may not have been necessarily only addressing the person’s needs but also ameliorating potentially any fallout politically.”

It also includes collecting evidence such as CCTV footage. Higgins said she has been denied access to the footage despite repeated requests, although other staffers had seen it.

Holding a meeting with Defence Minister Linda Reynolds in the same office the assault allegedly occurred was “highly inappropriate”, Quilter says. A spokesman for the Morrison government conceded this was a mistake.

3. Not protecting her job

Higgins alleges she had been made to choose between going to the police and keeping her job.

Senior lecturer in politics at Australian National University Maria Maley has been researching the experiences of political staffers. She tells Crikey the highly competitive nature of their work, along with their loyalty to the political party, led to people tolerating poor behaviour.

Staffers she interviewed said it was too risky to make complaints.

“They had no confidence that they would be supported and generally they felt silenced,” she said. “It was the sort of thing you just had to put up with because the well-being of staff was secondary to the look of the MP or the minister, and the party’s fortune.”

Staffers are employed in temporary roles contingent on their representative holding their political position. Maley believes job protections for staff who speak up is crucial, and staff should be managed as a group resource instead of how they are now — individually expendable.

“You could move people to different offices and manage them as a group,” she said. “I think it might be a sign that parties are taking more responsibility for the well-being of their staff at the moment.”

Quilter said: “What stands out to me is there doesn’t appear to have been a policy or procedure in place for how a person might go to the appropriate person to disclose the incident.”

Maley says an independent mechanism for handling assault or harassment complaints was needed.

“At the moment the only people who can act on anything in relation to the employment is that individual MP or senator,” she said. She added that a body with real power was needed to oversee claims.

How a person responds to a rape disclosure is crucial. Rape and Domestic Violence Services Australia advises responding with compassion. The three things a person who has been assaulted should hear are: “I believe you”; “It was not your fault”; “You are not alone.”

Instead, Higgins’ complaint disappeared once she moved to work under Employment Minister Michaelia Cash who allegedly also knew about the incident but didn’t reach out to Higgins.

Morrison has apologised to Higgins over how his government handled the complaint and has appointed two MPs to figure out new standards and devise an external complaints-handling process.

Wouldn’t it be great if, from now, no one would work for them?

Rule 2, stop protecting other people who are dicks.

What about Rule 3: Chop it off

Was anyone else bothered by the Minister in question citing the 1800 helplines in response to being interviewed? (If you heard that interview.) To me, in the context, it sort of says, “If you got raped, ring the helplines” – when what was really needed here was a helpful and just response from the organisation in question, not fobbing it off to community support services, which is partly what it looked like to cynical me.

“Higgins alleges she had been made to choose between going to the police and keeping her job.”

Years ago, I was physically (not sexually) assaulted by a young male at work. I wasn’t the first woman this had happened to at the hands of this individual – as I found out when the boss of the workplace actually disclosed this to me, and commented, “He has an issue with impulse control, please go easy on him, if you don’t his future will likely be adversely affected.” And asked me if I would report the assault to police. “Of course I’m going to,” I said. “Do you think wilful assault should be consequence-free, all hush-hush, we can get him on an anger management programme? It’s about time that he was held accountable for assaulting women.”

The workplace boss put all sorts of pressure on me not to go to the police, including threatening me with not renewing my employment. This happened not to be a huge issue for me in that particular instance, as I was only temping on a working holiday, and had solid references from my usual employers back home. But it’s insulting and disgusting nevertheless, and I think the other women hadn’t gone to the police at least in part because of the pressure this boss would have put on them, and that this was their “real” job.

Possibly I should have gone further and reported the boss to someone for his behaviour, but who do you go to? This was public sector employment, by the way. It does show the usual pattern of protecting the wrong people, and this is just one of many, many such instances that I became aware of in my own circle of contacts – this is not a rare thing. We have alleged laws and standards, but they’re all hot air when it goes like this.

This young woman went through hell because an election was about to be called, not surprising considering who wanted to hang onto the PM job.

Scomo had to ask/talk to his wife about the rape!!!!?? Shows me how corrupt/evil the cohort of LNP ministers are – do all to remain in power. And they are so Christian! No morals, no ethics – greedy nasty people.