The military has seized power, declaring the results of the latest election invalid. So what does this mean for the people of Myanmar, and how should Australia respond?

Myanmar’s fragile democracy has plunged into darkness once more after a swiftly executed February 1 military coup in which dozens of politicians including President Win Myint and de facto leader Aung San Suu Kyi were detained.

The country’s generals, led by Min Aung Hlaing, had disputed the results of the November 8 election, in a bizarre echo of former US president Donald Trump’s baseless claims of electoral fraud. They claimed the National League for Democracy’s (NLD) formation of a government was an attempt to forcibly seize state power, although international organisations declared the election fair and credible.

Suu Kyi and her NLD party had once more confounded observers by winning and sweeping back to power with an even larger majority than in 2015. It was the second time it had contested a general election since the 2008 constitution after sitting out the 2010 poll. Voters in ethnic states who had been expected to opt for local parties remained loyal to the NLD and its wildly popular leader 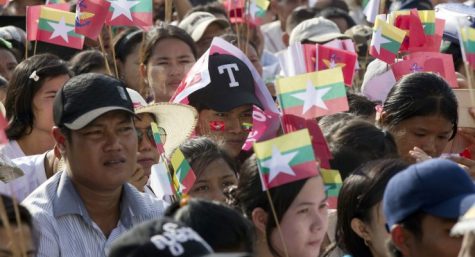 The key to the coup, keen observers of the country say, was actually the looming retirement of Min Aung Hlaing in July. In 2020 he self-signed a one-year extension of his term, but the parliament that was due to sit for the first time on the day of the coup was not planning to give him a further extension.

Aung Hlaing has been publicly eying the presidency, but the military-backed Union Solidarity and Development Party’s failed to gain enough votes to team with the 25% of parliamentary seats reserved for the military under the constitution to take the nominal top job.

That was all put aside yesterday when the military’s nominee for the presidency was installed and promptly handed all his powers to Aung Hlaing.

Australia is a long-standing supporter of Myanmar and its democratic transition. We call on the military to respect the rule of law, to resolve disputes through lawful mechanisms and to release immediately all civilian leaders and others who have been detained unlawfully. We strongly support the peaceful reconvening of the National Assembly, consistent with the results of the November 2020 general election.

The NLD’s hold on power has always been checked by the military’s holding the key defence, border and general administration portfolios (including budget and the police).

Suu Kyi has been forced to compromise with the military, at times acting as an apologist for it — most particularly in the horrendous ethnic cleansing program in which 750,000 ethnic Rohingya fled to neighbouring Bangladesh, forever tarnishing her global reputation. For his role in driving the Rohingya program Aung Hlaing is effectively one of the world’s most wanted men.

But unlike previous coups in 1962 and 1988, this time the people of Myanmar have experienced more than a decade of freedom. Their country finally opened up to the rest of the world, bringing international investment, modernisation — including mobile phone networks — rising wealth and a growing middle class while becoming one of the best tourist destinations in Asia.

With this has come a surprising amount of media freedom. But while its economy has improved it has not had the sort of growth trajectory many predicted, largely due to a lack of competence in the government.

Australia’s decision to dramatically cut aid under Coalition governments (from 2014) affected its South-East Asian neighbours. Aid to Myanmar had fallen even further in recent years after payments were diverted from South-East Asia to the South Pacific. It got only $84 million in the current budget year, down from $103 million in 2018-2019.

Diplomatic outreach has also faded since the 2007-2013 Labor government when there were multiple prime ministerial, foreign and trade minister visits. While it’s true that Payne has been more engaged than her predecessor Julie Bishop, particularly on the Rohingya, Human Rights Watch howled down a recent meeting between Australian ambassador Andrea Faulkner and Min Aung Hlaing.

Yet the impulse of Western countries towards sanctions in such situations would not be wise in the context of China’s regional economic imperialism. Better to lift offers of aid and assistance to ensure that we have observers on the ground in a country where media and information freedoms are likely to be stifled. It’s a new type of subtler diplomacy that Australia needs to better understand. 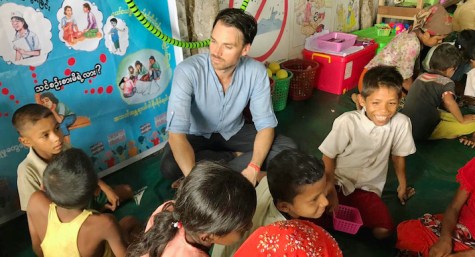 Much in Myanmar remains unknown, most particularly what sort of shape the military’s ruling council will take. Few ministers were caught up in the dawn raids by security forces, a sign that the military may try to keep the country running properly.

The military can be assured of China’s backing (although it too appears to have been surprised by the coup), which will significantly dampen any economic fallout from Western efforts to impose sanctions.

There is also widespread concern the multiple ethnic fault lines that have rent the country with serial civil wars since its 1948 independence from Great Britain will again rise to the surface. The military response to these will be key. But it is the plight of Rohingya and the stability of their western Rakhine state homeland that remains the biggest concern.

The nascent process of repatriation hangs in the balance and about 500,000 Rohingya remain in Rakhine, further away from the Bangladesh border. They cannot be forgotten. The Rakhine Buddhist Arakan Army, the second largest militia in Myanmar, had restrained its fast-growing activities over the election period — but it is now likely to mount fresh attacks to test Myanmar’s coup-happy military. 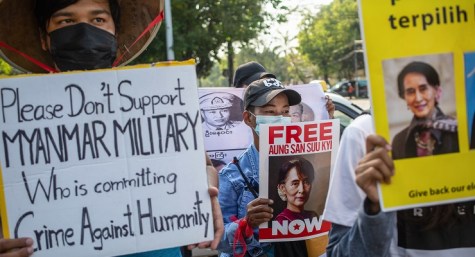 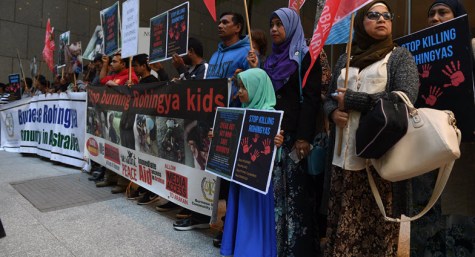 I don’t imagine for a moment that you are going to permit this remark to influence future articles but tapping this stuff from your air conditioned office merely exposes your ignorance of the region and invites discredit from those who are a good deal closer to the situation than you are.

Democracy huh? Your version or her version (or neither version)? The Brits had issues with the “tribal” stuff over the entire period with a number of books written over the decade from the mid 1920s.

It actually hasn’t changed; at least not by all that much as present circumstances (too obviously refer).

Following America, one has to wonder how many other coups will be launched in so-called democratic countries because of ‘voter fraud’.

The military were still running Myanmar, this is just them stopping the theatre. Trying to find a link to US domestic politics is just reaching for a western angle.

The “human face” mask of the Burmese military tyranny has been stripped off, exposing to those who didn’t already know it that Suu Kyi was there to disguise continuing dictatorship as a step towards “democracy.” The atrocities against the Rohingya leading to their expulsion from their country, justified and defended by Suu Kyi, left no doubt about the true nature of the regime. Their atrocities against other ethnic minorities continue. NO, there should be no subtlety in dealing with them. Stop the aid, most of which is likely being funnelled into the generals’ Swiss bank accounts. Issue international warrants of arrest for the generals and blacklist all of their businesses and business associates. If China wants to get its hands dirty in their muck, let them. Right next to their enemy India they might find some resistance to that.

I’m wondering where the author got the idea that aid to straight up military dictatorships after a coup will help foster democracy. Egypt would suggest otherwise.

I think that I am being fair with the remark that I am unable to recall a single instance where MS has not applied his opinion over factual accounts in journals of Int. Relations or to diplomatic announcements.

In the current case there is barely a paragraph that he has written that is not contradicted in the established journal literature.

It is unadulterated Francis Fukuyama-ism Draco and about a grade sideways from the ideological musings of Milton Freedman.

Until Trump, the policy enabled the yanks to keep their hands in; for the purpose of promoting “democracy” of course. Don’t fret : uncle Joe will give the handle another crank.

Our Australian Government has been training Myanmar military officers and increasing the Defence budget for cooperation with them, despite warnings by Amnesty International and Human Rights Watch. Christopher Pyne was urged in 2017 not to legitimise  systemic human rights abuse by training the Myanmar military, of some of whom have returned to high positions which they are now wielding to stage a coup and remove from office Aung San Suu Kyi following her clear election win .The Australian Defence budget should be for our nation’s defence , not for weapons sale profits to Saudi Arabia and military training for Myanmar.

Yes, why are we always on the side of the bastards?