A tidal wave of consumer spending has boosted the domestic economy by 10% compared with last year. But will it last?

One hot day last week I arrived at the beach to meet members of my family. They were sitting on their towels in the full sun, despite swearing to me they were planning to bring a beach umbrella.

“Bunnings was completely sold out,” came the response.

I checked online when I got home and beach umbrellas are sold out all over the place. This is an economic signal. One of strength. For the first time in many years, Australians are stuck here. With the pandemic at bay domestically and rampant abroad, Bali, Japan and Europe are off limits. Not even New Zealand is possible. Instead we are crowded on to Aussie beaches.

Australians are taking the vast sums we spend on foreign travel and seeding them into the domestic economy. And the economy is roaring into 2021 on an enormous tidal wave of spending.

As the next three graphs show, Australian consumer spending is up very strongly compared with the same time a year ago. We are spending about 10% more, according to the Commonwealth Bank (CBA), with particular lifts in online spending and spending on goods. Spending has been very much elevated for six months now in Queensland and Western Australia.

Total spending in the Australian economy depends on the number of people in the economy, the resources they have, and their attitudes to spending. We will look at each in the next section.

The number of people

Has the pandemic made Australia more populated? The absence of foreign tourism may have increased the number of people physically present at any one time. Because while Australia attracts a lot of foreign residents on a temporary basis, it also sends a lot of Australians on holiday each month.

Australians travel abroad in very large numbers. For example, over Christmas 2019 there were 1.07 million foreign tourists, but 1.4 million Australians went abroad. Taking both sides of the equation away leaves us busier.

If all that money that Australians would have spent on Japanese ski trips and tickets to Broadway productions is spent on home improvements and local holidays, we’ll see a big leap in spending. Of course, it doesn’t always help tourism operators — those who depend on foreign tourists are struggling mightily.

It’s not just the jetset propping up spending. Incomes are up across the board compared with this time last year.

For example, this time last year JobSeeker payments were $278 a week but now are $357 a week (JobSeeker was formerly known as Newstart, i.e. the unemployment benefit). That is still meagre to live on, but for retailers in places with a large share of JobSeeker recipients the boost must be noticeable.

JobKeeper is also boosting wages by keeping millions employed — until March at least.

You could in theory have a country stuffed with people with high incomes and still experience weak spending if they were frightened. At certain points in 2020 that was the case and we saw savings rise sharply. But by the end of last year consumer confidence was rising. The latest confidence data from Roy Morgan and ANZ show relative exuberance.

You have to go back to pre-pandemic, pre-bushfires Australia to find a higher number. Such strong consumer confidence creates the perfect storm for consumer spending: many people with elevated income and positive attitudes. No wonder the share prices of Woolworths, Wesfarmers and JB Hi-Fi are at record levels.

Consumer confidence is an index created by surveying people on their attitudes, and the aspect that shows the most strength is confidence in economic conditions. Essentially we are losing our fear that a recession is coming.

This is good news, because recessions thrive on fear. Fear begets thrift and thrift causes businesses to go broke, and so on in a vicious cycle. Australia’s unemployment rate keeps falling, and each time it does that bolsters the exact confidence we need to push it down further.

Will we hit a speed bump in March when JobKeeper is removed and JobSeeker is reduced? The Reserve Bank is confident the savings so many households tucked away in 2020 will keep the spending going. There are billions stuffed into Australian bank accounts that weren’t there before 2020, and the official expectation is that as income supports are removed, savings will step into the gap.

“High household savings was also likely to support consumption in the period ahead,” it said in the most recent board meeting’s minutes.

But one risk to that outlook is that reduced government support erodes confidence and progress on reducing unemployment stalls at a high level. That could make Australians leave money in the bank.

Another risk may be that Australians could be welcome to travel overseas before foreign travellers are welcome here and we get a great imbalance in travel spending.

If all those built-up savings pay for holidays abroad, our economy may not feel the benefit. In December 2021 Bunnings shelves might be overflowing with beach umbrellas — but with nobody around to buy them. 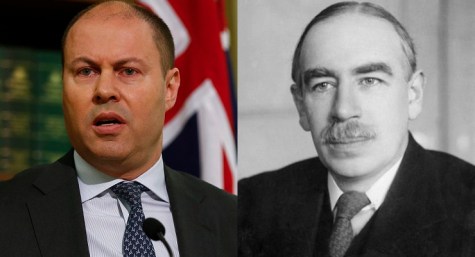 Just one point. Who in Australia would be going on an overseas holiday this year, welcome or not? Are we really that stupid?

Not everywhere deserves to be tared with a large brush Lee. However, governments in NZ, Oz and Asia (in the main) have adopted ‘KIS’ as to the regulation of tourism.

Besides, the elderly are most at risk as any age profile of death from C-19 (problematic in itself) will attest.

This, with the super tax pieces, demonstrates just how ridiculous and perverse is the economy ‘we’ have designed. It is dominantly based on us all buying shit we don’t need and paying the bulk of tax. On the other hand, we host a bunch of corporate thieves who dig up ‘our’ recourses, make a motza out of that for a lot of foreigners, pay comparatively little tax and actually collect subsidies. If it wasn’t true, it would make good comedy.

No mention Jason of Scottie’s relentless determination to wreck Australia’s fourth biggest export earner, education, and thus deprive the economy of literally hundreds of thousands of, easily exploited and underpaid, temporary workers.
After the way Scottie tossed them overboard, queued up at the emergency food kitchens,sleeping in their cars, what foreign student would want to risk coming to Australia in the foreseeable future.
Maybe Australians will have spend a bit more of their stored up savings dining out, with establishments paying higher wages to young Australian workers. I can only wish.

The savings from not going overseas are considerable, not just the overseas spending but those airfares aren’t cheap.

And lots of people have lots of cash in their bottom drawer.

One other possible benefit is that with all those foreign students not coming over, businesses might have to pay award wages to locals who probably know that the minimum wage is around $20, plus penalties for those who still have them.

There are so many imbalances in the economy, every stupid govt policy is likely to have some unintended benefit.