The inauguration of Joe Biden was a strange affair, made stranger when watched at 3am from the other side of the world.

The inauguration ceremony for Joe Biden is like no other before it, an affair made incredibly eerie due to the actions of Donald Trump and his insurrectionists.

Taking place, as is tradition, at the US Capitol, the event has just a couple hundred guests, is guarded by several thousand National Guardsmen and features an empty National Mall where the customary throngs of spectators have been replaced with American flags honouring the 400,000 citizens killed by COVID-19.

Hosting honours go to US senator and former presidential hopeful Amy Klobuchar — an apparent thank you for pulling out of the Democratic primaries along with fellow hopeful Pete Buttigieg (future transport secretary). Buttigieg is in attendance, as are Barack Obama, George W Bush and Hillary and Bill Clinton.

Klobuchar gets in quick with the rhetoric, claiming this is the day US democracy picks itself up, pledging never again to take it for granted, and asking: “Have we become too jaded to appreciate what a blessing it is? I think not.”

She gets her largest round of applause for pointing to Kamala Harris, the first African-Amerifcan, Asian-American woman vice-president. Klobuchar then introduces chair of the inauguration committee Senator Roy Blunt, who does nothing of interest but gets in the second of roughly 200 references to former presidents.

The next speaker, Biden’s friend Reverend Leo J O’Donovan III, gets in another reference in a prayer everyone has to stand for (something about George Washington; no one is really listening at this point).

Now, as everyone is forced to stay standing, we get to the good stuff: Lady Gaga appears to sing the national anthem. Gaga looks phenomenal with a fluffy silk red dress, navy cashmere coat, and gigantic, golden dove brooch complete with olive branch. Elle has an explanation of the symbolism in case you’re the kind of person who needs “gigantic golden dove with olive branch” explained to them.

Gaga sounds great, bringing incredible passion and theatrics — props to for the news producers for cutting to one of the 400,000 flags at the line “the flag was still there”.

Next up, and bringing some uncharacteristic dignity to the event, is Georgia firefighter Andrea Hall, who delivers the pledge of allegiance with American Sign Language.

Klobuchar is back to announce that Harris’ swearing in — making sure to again call her the first African-American, first Asian-American, and first women vice-president, something I can’t imagine Harris isn’t sick of hearing at this point — will be conducted by the first Latina justice of the Supreme Court, Sonia Sotomayor.

Next up is singer Jennifer Lopez, who is rocking an all-white power suit and crushes “This Land is Your Land” with some “America the Beautiful”, after which Klobuchar jokes that this is the first ever JLo warm up act for Chief Justice John Roberts.

And then it’s on.

President-elect Joe Biden takes the stage, puts his hand on a truly massive bible, begins his oath and, honestly, I can’t help but feel a moment of dread — this is it; the Capitol is hardly the soft target it was when some right-wing extremists took over, but if there’s to be an assassination attempt this is it — but it all goes fine.

On Roberts’ “Congratulations mister president”, the crowd goes wild and my mum (who I’m staying with and has also made the deranged choice to watch this at the crack of dawn) yells out “oh thank God”.

Klobuchar is back for what seems to be her last time, and is beaming to be “the first person to formally introduce the 46th president of the United States, Joe Biden”.

In this moment, after four years of just some of the worst people running the most powerful country on earth, and even for my cynical, socialist heart, I can’t help but feel a stab of joy.

But now Biden himself is up, and folks, unless you love that word “unity” and all two or three of its synonyms, you do not need to listen to this speech.

The new president goes for roughly 20 minutes, and while it is 80% about bringing together the country — half of which chose the COVID-19 president over him; a solid chunk of which thinks he somehow rigged the election and an even smaller element of which certainly wants to kill him — there are some telling, intermittently likable and frustrating moments:

This is a great nation, we are good people.

Few people in our nation’s history have been more challenged or found a time more challenging or difficult than the time we’re in now. A once-in-a-century virus that silently stalks the country has taken as many lives in one year as in all of WWII.

Millions of jobs have been lost. Hundreds of thousands of businesses closed. A cry for racial justice, some 400 years in the making, moves us. The dream of justice for all will be deferred no longer. A cry for survival comes from the planet itself, a cry that can’t be any more desperate or any more clear now. The rise of political extremism, white supremacy, domestic terrorism, that we must confront and we will defeat.

To overcome these challenges, to restore the soul and secure the future of America, requires so much more than words. It requires the most elusive of all things in a democracy — unity … for without unity there is no peace, only bitterness and fury, no progress, only exhausting outrage … We must end this uncivil war that pits red against blue, rural versus urban, conservative versus liberal.

So here’s my message to those beyond our borders. America has been tested and we’ve come out stronger for it. We will repair our alliances, and engage with the world once again. Not to meet yesterday’s challenges but today’s and tomorrow’s challenges. And we’ll lead not merely by the example of our power but the power of our example.

The speech is, predictably, lapped up by some ABC News commentators, and is followed by two genuine highlights:

With thanks we’re done, and we get to business with one of the greatest political appointments in American history: senate budget committee chairman Bernie Sanders (not pictured). 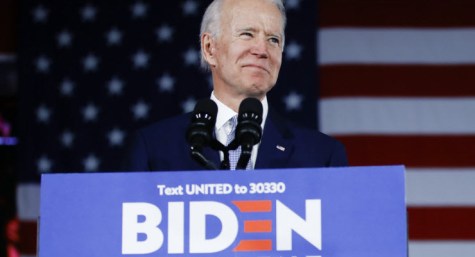 Biden in the box seat as Democrats choose evolution over revolution 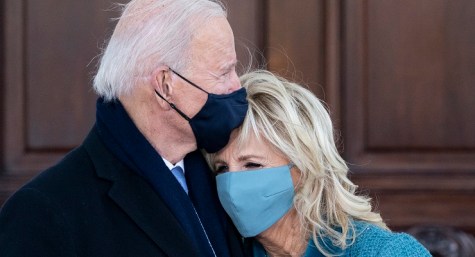 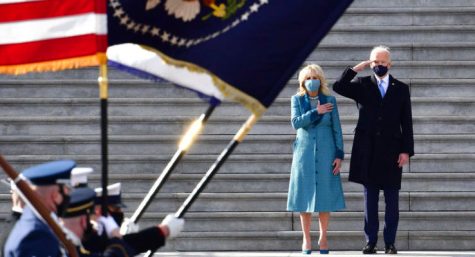 With thanks we’re done, and we get to business with one of the greatest political appointments in American history: senate budget committee chairman Bernie Sanders (not pictured).

I saw what you did there Chris. Very good.