Crikey wants answers, but our leaders aren't giving any.

Crikey has kept on chasing answers from the people who may be able to curb the Murdoch empire’s influence, following our special edition looking into the relationship between Murdoch media and US President Donald Trump.

Previously, the office of Deputy Prime Minister Michael McCormack had referred Crikey to “the very clear statements” McCormack had made this week on social media giants and censorship.

A spokesperson for Communications Minister Paul Fletcher told Crikey he would not be commenting on the matter, while a spokesperson for Australian Competition and Consumer Commission said that chair Rod Sims was on leave. 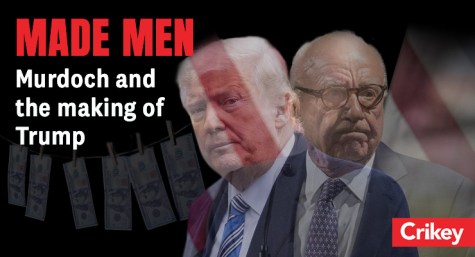 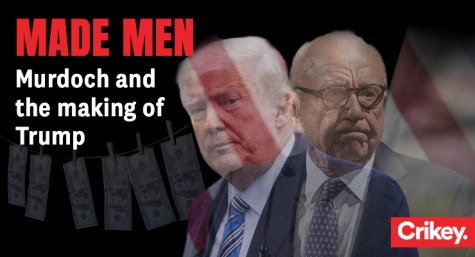 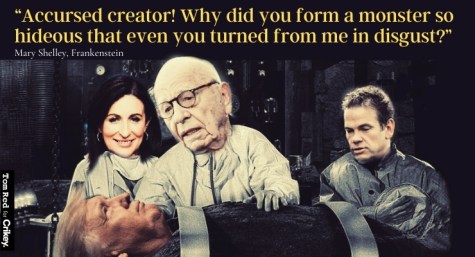 Democrats should summon Rupert and Lachlan to Washington for a grilling

Shaking in their boots

You have your answer.

They cannot comprehend that Murdoch will eventually turn on them regardless. Check his history. He ultimately cuts down those he once fostered.

They’re all scared of Him, just as most of the Republicans are scared of Him and Him. Rudd and Turnbull are brave now after He gave them the arse. I agree we must get of Him, but how?

There’s a little bit of Rupert in us all. It can only be exorcised by education to a level that recognises propaganda. A phd in cynicism is the requirement. Since I got mine nobody will talk to me, so it may not be worth it. Or you could try polonium tea? There again, all things will pass, so why bother. Also, everything’s a scam anyway, or a psyop and if it’s not them, it’s aliens.

If only people would proof read their posts we’d know if their finger slipped or are they really that bad at spelling. Or is it a deliberate ruse to hide their genius psyop? As you see, get of Him comes at a cost. Must We but. Web dark it becomes. or it! Y

This is the most extraordinarily humiliating failure of political spine on the matter of Murdoch KR that I can recall, even set against the long and dismal history of political spinelessness that he has inspired. Consider:

– Two recent former PM’s have spoken and written openly and repeatedly (if belatedly) about the need for Australia and the world to finally inoculate itself against the Murdoch poison that has infected democratic processes and public debate.

– well over half a million Australians have openly backed the public petition calling on our elected leaders to do so.

– Murdoch’s sustained enabling sponsorship of the indisputably worst US President in history, and Trumpism’s subsequent trashing of the US polity (especially journalism) has left his reputation and influence (and this power) there in shreds.

– the pivoting ‘marketplace of ideas’ position FoxNews is now confronting places even Murdoch’s cash cow in a precarious position; the rest of his journalistic empire is increasingly in the toilet.

– worse, its noxious influence is now the subject of such routine open discussion, right across the Anglosphere, that its efficacy as a ‘self-censorship’ bogeyman is rapidly dwindling; where once Murdoch dominated from the shadows, he’s now been dragged into the disinfecting light, and (like all bullies) just looks increasingly ridiculous.

– even members of his own family, notably James, are openly rejecting the damage he has wrought.

– the Biden Administration, in its unfussy embrace of policy directions Murdoch has openly (and ungainsayably) resisted – climate change action, global unilateralism, form central government intervention on Covid 19 – will quickly render News even more irrelevant. Rupert has just backed too many losing horses too virulently in the last decade to pull off his usual reverse ferrets.

– he’s an old man, and his power is grounded in an old and dying business model. Whatever commercial time grotesque protectionism and a supine ACCC may buy him in this provincial backwater will mean nothing elsewhere.

Murdoch’s is over. And yet. And yet.

Still the political class here clings to the phantom of his information sugar daddy ministrations, poignantly seeking his favouring cuddles. The ALP especially! An ALP that for at least a decade now has got nothing for its debasing, toothsome cajolings but…disdain. You would have thought that if ever Albonese’s outfit had the chance at breaking off the since-Hawke supplicatory dependence on News Corps, it’d be now.

Oh dear me. It makes Ted Cruz’s late stage self-abasement before the doomed Trump who made an abject public if him in endless ways seem…noble and far-sighted.

Keep at them AS/Crikey. No wriggle room. Because at least it’s making everyone choices clear, for posterity. Great, unambiguous stuff.

Murdoch is ‘a’ problem but he is not ‘the’ problem.

The underlying problem is the neo-con political and economic policies adopted by all sides of politics in most western democracies over the past 40 years. This has resulted in a highly skewed distribution of wealth and in particular the hollowing out of the middle class.

For the first time in generations, western societies are facing the prospect of the next generation having a lower standard of living.

These are the sorts of circumstances which provide fertile ground for communism and fascism. With the collapse of the USSR and the restructuring of the Chinese economy, communism has gone out of favor. That leaves fascism.

Murdoch is an opportunist taking advantage of the worst aspects of human nature to further his business objectives. As repellent as this is, it is not the cause of the problem – although it does help to make it worse.