Good morning, early birds. Thousands of armed pro-Trump extremists are reportedly plotting to surround the US Capitol ahead of Joe Biden's inauguration, and there are calls for an immediate pause on plans to rollout the AstraZeneca vaccine over fears it may not be effective enough to generate herd immunity. It's the news you need to know, with Chris Woods.

Thousands of armed pro-Trump extremists are reportedly plotting to surround the US Capitol ahead of Joe Biden’s inauguration. Speaking to CNN member of Congress, Pennsylvania Democrat Conor Lamb, tells how was among those who were briefed late Monday on terror threats against lawmakers and the Capitol.

According to The New York Times, the FBI has also issued warnings to local law enforcement over the potential for armed protests in all 50 states, with some legislatures already seeing demonstrations, and Twitter citing talk of plans for a second attack on the US Capitol and state buildings on Sunday, January 17th in their decision to ban Trump.

US House Democrats are meanwhile preparing to vote Tuesday evening (Eastern Standard Time) on a measure calling for Mike Pence and the GOP cabinet to remove Donald Trump using the 25th Amendment, in a symbolic move ahead of a planned impeachment vote on Wednesday.

Elsewhere, ABC explains that Twitter has blocked 70,000 QAnon accounts following the riot, Washington Democrat Pramila Jayapal has reported testing positive to COVID-19 following the lockdown with Republican lawmakers “who cruelly and selfishly refused to wear masks”, and The Washington Post ($) reports that not only have several Capitol police officers been suspended over their role in last week’s attack but that a Secret Service officer is under investigation after accusing lawmakers of treason and sharing election conspiracy theories on social media.

For his part, Trump has shown no contrition for inciting last week’s mob, calling his remarks to the rally “appropriate” and, along with other Republicans and Fox News lackeys, attempting to link the potential for mass violence with the impeachment effort.

PS: For the second time in two days on the job as acting prime minister, Michael McCormack has justified his colleagues’ right to spread Trump-style conspiracy theories (“facts can sometimes be contentious” is the new “alternative facts”) and equated last week’s armed siege with protests against the systemic police killing of Black people.

McCormack, for good measure, also rebuffed questions over his stance on the Black Lives Matter movement with a Pauline Hanson-style, anti-anti-racist “all lives matter” jibe.

A SHOT IN THE DARK?

The Australian and New Zealand Society for Immunology has called for an immediate pause on plans to rollout the AstraZeneca vaccine, the domestically-manufactured centrepiece of Australia’s broader strategy, over fears it may not be effective enough to generate herd immunity.

However The Sydney Morning Herald explains that the Australasian Virology Society appears split on the issue, with initial support for a pause quickly retracted by president, Professor Gilda Tachedjian over concerns of undermining public confidence and a lack of sufficient data.

These concerns come after peer-reviewed data in The Lancet demonstrated that the drug has an efficacy of 62% among those given the prescribed two doses but 90% in a group accidentally given a half and then a full dose.

The debate takes place as Gladys Berejiklian “pleads” for more testing in Sydney after five new community cases, four of which The Guardian explains are mystery cases.

NO PLANE, NO GAIN

Finally, the ABC reports that the Transport Workers’ Union (TWU), the Australian Services Union (ASU), the Flight Attendants Association of Australia (FAAA), and the Australian Council of Trade Unions (ACTU) are taking Qantas to the High Court over claims of inadequate public holidays, weekends, and overtime rates during the pandemic as well as their alleged misuse of the JobKeeper scheme.

It doesn’t matter if you’re the richest man in Australia or a single mum on a pension. In Australia, you get the same standard of medical care.

When Kerry Packer had a heart attack, he went to Royal Prince Alfred. When my mum went to hospital, she went there too. It’s where I went last week after a car crash. 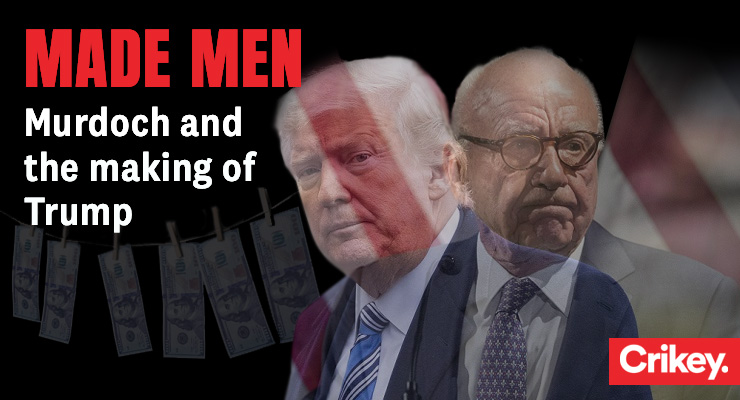 Origin of the specious: how a family business polluted a democracy

“Rupert Murdoch had never had a US president in his pocket before Donald Trump landed there in 2016.

“It was the biggest missing piece on his global chessboard. An Australian by birth and a patriotic American citizen for the past 35 years, Murdoch has been grovelled to by almost every Australian and British prime minister for five decades. But until Trump, no president had chosen to follow that sycophantic route.” 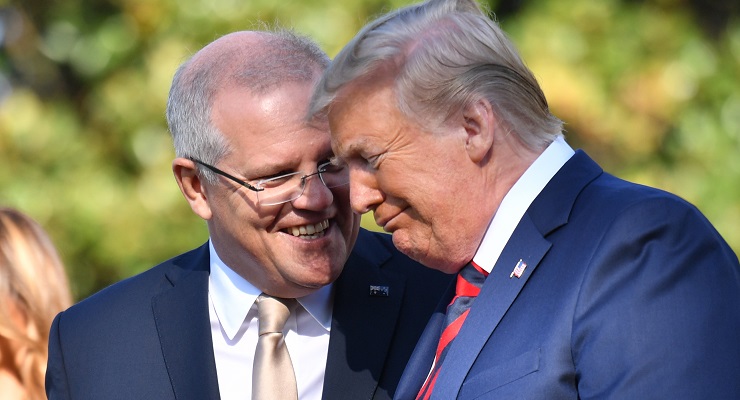 “In Murdoch’s hands, Sky News represents a dangerous tool able to amplify the power of his print monopoly. He will use it to further radicalise the Liberal and National Party base and increase his capacity to guide future preselections and leadership contests. The Coalition is at risk of becoming a fully captured subsidiary of the Murdoch organisation as he pushes them further and further to the far right.” 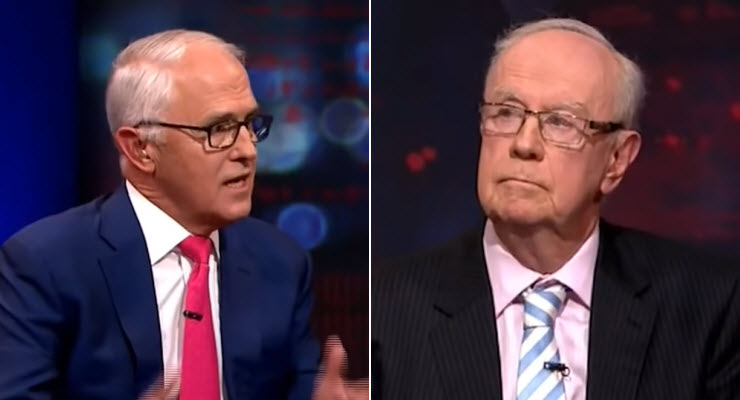 “Murdoch did not directly dispatch the mob as Trump did, but his media, more than any other, amplified the narratives of hatred, division and denial that made the mob possible.

“I have been with Trump and Murdoch and the power relationship was all too obvious. Trump was deferential, almost obsequious, to Murdoch. In fact when Trump and I first met he wanted Murdoch to join our bilateral discussion. I told him I wouldn’t do that — something Murdoch did not appreciate no doubt.”

Bushfire in the City of Cockburn, in Perth’s south, downgraded to watch and act level

No, Twitter is not censoring Donald Trump. Free speech is not guaranteed if it harms others — Katharine Gelber (The Conversation): “There is no free speech argument in existence that suggests an incitement of lawlessness and violence is protected speech. Quite to the contrary. 19th century free speech proponent John Stuart Mill argued the sole reason one’s liberty may be interfered with (including restrictions on free speech) is ‘self-protection’ — in other words, to protect people from harm or violence.”

Donald Trump ban debate flags need to better police Big Tech ($) — Paul Fletcher (The Australian): “Last month, the government released an exposure draft of a new Online Safety Act, designed to strengthen and expand the eSafety Commissioner’s powers. Under the new Act, the commissioner would have the power to deal with serious cyber abuse directed at an Australian adult, including to direct that such content be removed if the platform did not take appropriate action after a complaint from a user. The definition of cyber abuse has been set at a higher level for adults, recognising they are more resilient than children and also to properly balance freedom of speech considerations.”

We should be very worried about Joe Biden’s “domestic terrorism” bill — Luke Savage (Jacobin): “Nearly two decades since its initial passage in the aftermath of the 9/11 attacks, the Patriot Act has continued to linger in our collective memory. Though few Americans probably remember much about its provisions or specifics, the Bush-era legislation long ago entered into general usage as an synonym for heavy-handed domestic surveillance and institutional overreach — the words ‘Patriot Act’ now being practically synonymous with secrecy, eavesdropping, and the rolling back of civil liberties under the intentionally broad guise of ‘national security.’”

McCormack and his defence of “Freedom to spread and mainline misinformation”?
Kelly for one is not a doctor – to be mainstreaming such quackery from his position?
But Kelly, Christenen et al are members of the government of Australia – to be coming out and all but declaring their faith, themselves, in such rubbish, to be using their positions to be legitimising such crap as they are, is irresponsible in the extreme.

However, in their defence they are “members of Scotty FM’s government” – another clear case of “Business as usual” …. “Keep on (coal) truckin'”?

I’m not sure that the democrats have thought this impeachment thing through. If they manage to exclude trump as a candidate for 2024, he we able to swan around saying that the dems couldn’t beat him in a vote without cheating, and they passed this illegal impeachment to stop him. Also if he’s excluded from the electoral process it will give carte blanche for his duck dynasty support base to build a non-electoral movement around him. Better to see him beaten fair & square in an election I think.

He was already beaten fair and square in an election, but he won’t go away. How many times should the American people put themselves through this misery?