Trumps for the meme-ories: the most bizarre moments of Donald Trump’s presidency

It was the presidency that launched a thousand memes. Crikey remembers the strangest moments of the most bizarre presidency in history.

There is a sense, as Donald Trump’s various attempts to overturn the US election continue to fail and fail, that if the president doesn’t cease being significant enough for jokes it’ll be because he’s leading one side of a civil war. As such, the jokes about him will swiftly become less funny.

So it’s worth collecting the memes and moments of what has been objectively the weirdest and funniest presidency in US history.

A Twitter feed dedicated to gifs of Trump writing something, before lifting the piece to reveal it’s a childlike drawing and solemnly showing it around while people behind him clap.

The account kept up the gag, with mixed results, for the whole of Trump’s presidency.

Which Jonathan Swan are you today?

This was the product of an August interview where senior Axios reporter Jonathan Swan’s response to the president’s coronavirus spin and general incoherence became a simulacra of everyone’s experience of 2020.

Trump attempting to converse with a young boy who had volunteered to mow the White House lawn became perfect caption fodder for depicting Trump asking about policy concerns, or wondering which of his children he is.

Thanks for the mimes

People have sustained entire careers simply on miming along with Trump’s odd speech style — all stilted, rambling and grandiose. Hell, comedian Sarah Cooper has a TV show now because of it. Our favourite is Kylie Scott, whose rendition of Trump — as a vaguely flirtatious drunk trying to sound smart — does actually capture something about him.

The New York Times took a lot of heat for platforming various extreme elements of Trump’s support, but surely their greatest contribution to the story of the Trump years was this photo shoot of a pensive, melancholy Trump Jnr for a March 2017 profile.

Historians will spend a lot of time debating whether the Trump administration was a serial grifter’s final, unaccountably successful con, or some kind of Brechtian performance piece. There are so many things that happened during his time as president — so surreal, so striking — that no comedian need (nor could) improve on it.

Yes, I’m thinking about the time he looked directly into an eclipse. If you think a simple Google image search can’t be a work of art, I present the following:

Or that time the Easter bunny simply loomed over his shoulder as he gave a speech:

His refusal to leave

And now, as he refuses to leave, US network Comedy Central took his petulance and obliviousness to its logical conclusion, depicting Trump as a toddler who just won’t get off his space hopper and go home: 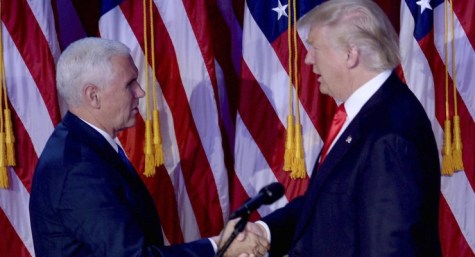 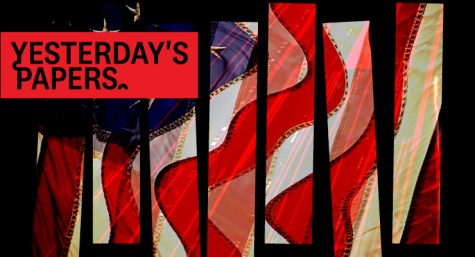 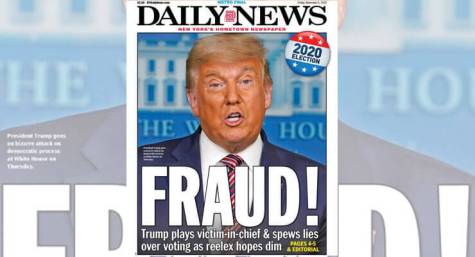 I’ve enjoyed the sampling of Trump in music. It isn’t as good as GWB samples, or his father, but he said so many odd things. My favourite was from ‘KMF’ by KMFDM. ‘Bing, boom, right out of the toilet!’

No mention of President Supervillain? He went MIA for a while, but re-emerged with some killers at the end.

looking at the eclipse was the most profoundly revealing thing this bloke did while in office. The idea that children could possibly grow up to want to emulate this president was the most important reason why he just had to go.
He only ever existed because of how greedy the corporate sponsors of politicians have become, they have managed to completely disengage with anyone on a lower salary than themselves, . commercial cannon fodder.