The uniquely Australian violence of the Brereton war crimes report

Australia represents itself as the innocent abroad. But is that just to shield us from the fact that we may be worse than most, as our overseas wars tend to be a projection of unfinished violence at home?

Like all such documents, the Brereton report on alleged war crimes by SAS forces in Afghanistan changes nothing and changes everything.

We have known ever more of these events year on year for some time now. The events themselves are not surprising to anyone with a clear-eyed view of the military, any military. But none of that is the same as having it spelt out in an official document with the force of the state, or part of the state, behind it.

The document, with its stories of execution of Afghan civilians — the sadistic torture, the killing of teenage boys, the slitting of throats, the walking of young men to their deaths — is hideous, sickening, shaming to be Australian.

Shaming, not because one expects Australians to be “better” or even simply good — shaming to be associated with it by common citizenship, to be connected with it coming into the world. For the state to be speaking of these acts as accusation and confession all at once.

What the Brereton report has identified as the proximate context of the systematic terrorism, of 39 killings (at least), was a culture of performative death, of cabal and myth, right-wing memes and heavy metal imagery, all in the wider context of the Afghan war’s pointlessness — the strike against a Taliban regime sheltering Al-Qaeda, turned into a two-decades fiasco of heat and dust, initially, ostensibly, to shore up the corrupt, clannish Kharzai government. 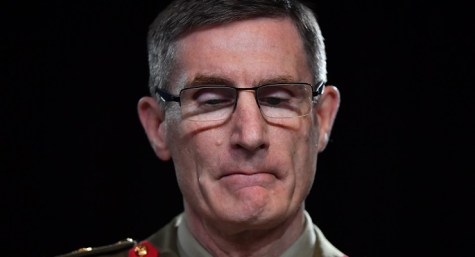 Officers escape legal responsibility, but what about their moral accountability?

And then…? Then simply to project power within Western politics — for the right to assert an idea of the West, for Labor and others not to be outflanked on national security. A war without purpose, except to be a war, absent from TV screens or any awareness of it over here, where it is a cipher.

A war whose fronts, battles, movements we know nothing of because there appear to be none. Just one endless grinding uncompletable occupation, which turns every civilian into an enemy and anyone trying to stay neutral into a collaborator.

The death cult the report alludes to was essentially fantasies of violence, projected onto real violence to give it meaning, a sure sign that there was no meaning at all.

One saw this in some of the earlier reports on the ABC a decade or so ago, when Australian soldiers were still being referred to as “our diggers” in stories that were little more than recruiting posters. It was the swagger, the tatts, the wraparound shades, the thick music blasting from the APCs, a war being stylised by its own participants, in its endless, historyless unspooling.

That could be said to be a universal feature of modern colonial wars, and the lack of inquiries by other nations into their own conduct may simply be because they are not interested in exposing it.

But it’s also worth asking whether there’s something uniquely Australian in all of this. We’re so accustomed to representing ourselves as the innocents abroad, our overseas forces as the armed wing of Contiki, to shield us from the fact that we may be worse than many, or most, because our overseas wars tend to be a projection of unfinished colonial violence at home.

Our “larrikin” image, acquired during World War I, may have less to do with a democratic spirit than that our troops in the Middle East were far more willing to terrorise and kill Arab and Turkish civilians than were the British or others — because such treatment was simply a continuation of the frontier wars at home.

If our propensity to terrorise black and brown people in a dusty outback has reappeared in Afghanistan now it’s because it simply reproduces the increasingly bitter stand-offs between certain sections of the white population and a colonised people.

This sadistic abuse of a native people may be far more “natural” to our troops than to others — simply what you do. If this is the case, then the cultural and social factors which the Brereton report has identified as motivating factors are the mere means to a deeper purpose, the lethal acting out of an unresolved violence at home.

That may not have occurred to, or be recognised by, our own leaders. You can be sure that in some form or another, that is how it will be recognised in Asia. We have to hold off lecturing the continent about human rights, just for a while.

But that’s not the most important matter in all this. What matters is our complicity in these killings — not the suddenness of battlefield deaths, or accidents, or even heat-of-the-moment stuff, but the terror of death and the pain of torture meted out to teenagers, slow and grinding, under cover of a pointless war the Coalition had no moral concern over (by the Coalition’s very nature) but that Labor could have got us out of at any point between 2007 and 2013.

Now rendered as accusation, as confession, for us to consider at our leisure, or bury beneath a half-billion-dollar war memorial, and the shouting and the trumpets of our annual “mateship” celebrations. 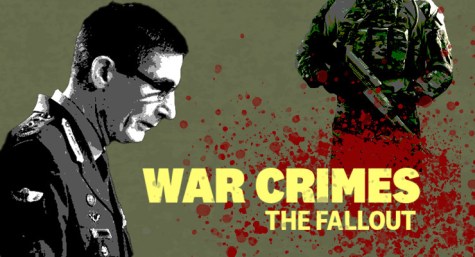 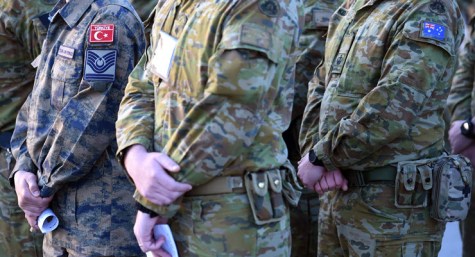 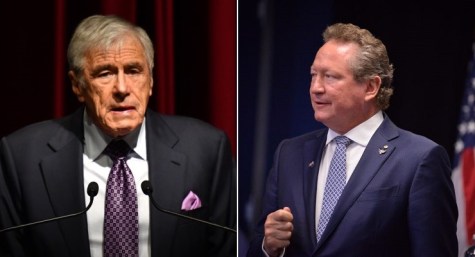 Where the elite meet the elite: who’s behind the special fund for special forces?

None of this is a surprise to the army. Not even close.

They know that this happens and will happen and that’s why they don’t take good people for these roles. They don’t take honest people with conscience and morals–those people will expose who they truly are, as has happened finally with what these brave whistleblowers have done. No doubt their lives were directly threatened by these animals.

Guy, sadly I’m not that surprised. It was pointed out to by a woman who knows these things from her youth, that the described behaviour of these soldiers is very much like bikie gangs’ rituals. Her take is that if they were doing these things to men, then they were surely also doing atrocious things to women. I haven’t seen any reporting on whether the investigation looked at rapes and sexual assaults. Did it, or are women victims totally invisible and don’t ‘count’?

“Her take is that if they were doing these things to men, then they were surely also doing atrocious things to women”

You could n’t be anymore right about that.

I grew up in Cottesloe, Perth Western Australia. As teenagers of drinking age we always went to the Sunday sessions at the Ocean Beach Hotel or the Cottesloe Hotel. 4 hours of heavy drinking and harmless revelry.

Unfortunately the SAS barracks were at Swanbourne just 3 ks from the OBH. The OBH was their favorite drinking hole. Everubody almost stood to attention when they arrived and nobody dared challenge them and spoke in whispers.

They had a favorite trick they used to play on the women. If ever their advances were met with rejection they would distract them and obtain their handbag/purse, or what ever and then visit the men’s loo and defecate in it and then return it to the rightful owner. You can guess the horrow from there. I only saw this once but was told it happened all the time. Not so fond memories

Detectable under DNA testing nowadays! However, (see my emgargoed post) one could begin traiing at 17 and be posted at 18 but not be entitled to a 5oz beer until age 21.

Last week or rather, last Friday we had all manner of speculation regarding Trump’s departure (or truculence) from the White House.
It is nice (encouraging?) to witness some improvement in topic a week hence but this matter is also becoming an obsession (not unlike Trump and his residency at the White House).

Until war became ‘modern’, with a survey peg at about Suez, all manner of hangers-on turned up at a battle site after a battle. Such was the case from the Wars of the Roses through to the Boer war and a tad beyond. Both sides provided seating for spectators during the early stages of the American Civil war. Until the latish 19th century in the UK and a good deal of Europe there exited a (common law) right for soldiers to be billeted. Is this the point where, from the history, ‘Me Too’ could be discussed?

All wars have possess collateral damage; it goes with the package but such is not to suggest that all soldiers are equivalent in outlook
although there exists (from my experience broad similarities. A major factor is seems (at least to me) is the matter of recruitment.

James Connor comes close with his first article listed today. On the one hand SAS (or all combat soldiers) need to be able “bang heads” but, equally, they ought to be tested on the Geneva Convention; at least to a lower high school standard of question. Ultimately the matter is about
recruitment but NOT regarding the military as something like a Public Service.

As to the cultural mentality, yes, agreed : any number of less that flattering letters home from soldiers remarking on the locals from Egypt to the “P” country in the middle east (can’t be too careful with the filters) were less than flattering to the host country. Yet, it was also a time (just post Edwardian) where class consciousness was at its height. Even into the mid 60s the son of a tradesman marring the daughter of a retailer caused the tongues to wag; especially in small (under 9,000 people) towns. As an aside the assessments of the locals during ‘Nam’ were not too different; although there was some variation.

Some of your insights notwithstanding, Guy, you might have trawled the documents that exist over Nur-berg if only in the interests of consistency or would such an exercise be placing the matter too close to the bone?

Some of the special forces members that i knew from the Vietnam War days, were very well educated, at some of the top expensive private schools in Sydney..Their all round social skills were as advanced and in harmony with their advanced murderous technical skills..

In that case Anna, you will recall that one could get a drivers’ licence at 15 in NZ, married (with  parental consent) at 16, begin training at 17, be posted at 18 but NOT be entitled (legally) to 5oz glass of beer until age 21.

The RSL was ok about this situation (at least in my experience) and I did not see one cop stroll throught the place looking for underage patrons.

Hopefully, this will shut down Nelson’s Folly at the Australian War Memorial and it can return to its original purpose – a place for reflection and memory, not a museum or “lived experience”.

We could have a war crimes wing for reflections…It shouldn’t upset the budget too much….with a bit of running water under a bridge & sunshine ,reflections can come cheaply..

Putting them on a pedestal (on the shoulders of those that had gone before) let too many of them think they were untouchable – made worse by some sort of perverse sense of loyalty to comrades in arms.