With its stamp duty change, the NSW government is taking a political risk on — shock horror! — good policy.

Big news in NSW where the Berejiklian government is axing stamp duty. Sort of, partly. And after a consultation period.

The government is taking a huge political risk, sneaking in an actually excellent economic reform under the cover of the upheaval caused by the coronavirus.

It could still be the end of the government, as the opportunity to accuse it of “land tax by stealth” is almost certainly too tempting for the state opposition to pass up.

A big opportunity arises here for people who care about policy more than politics: the opportunity for beneficial reform — a better, more efficient tax — rubs up against popular instincts. Siding with good policy is vital.

What does it mean for a tax to be economically efficient? Most laypeople know a lot about economics these days. The intricacies of supply and demand and competition are well known. Aussies are au fait with monetary policy. But the concept of economically efficient taxes is not as widely understood.

The best way to communicate it to people is like this: economy is like an engine. It can run smoothly or experience friction. Taxes are a cause of friction. Efficient taxes suck money out of the economy while creating as little friction as possible. If our taxes are efficient it allows our economy to run smoothly, and grow as big as can be for a given level of population, capital, education, etc.

If we move to a more efficient tax, there is a period where our economy grows faster without having to increase population or build more roads, etc. More jobs are created, wages rise, unemployment falls, etc. So far so good. What’s the issue?

Efficient taxes hit stable sources of demand — things where demand won’t change much when the tax comes in.

Here’s the rub: people generally like taxes they can avoid. Taxes on narrow things. A tax on beurre bosc pears would meet little opposition, for example. (beurre bosc pears are those brown ones with papery skin). But such a tax would distort the economy. First consumers would shift to apples and bartlett pears, then orchard owners would chop down their beurre bosc pear trees and replant something else.

By creating an avoidable tax, in the end we collect less revenue than expected and force the economy to contort itself. It shrinks the maximum possible size of the economy. (In our example, trees had to be cut down, farmers whose land is best suited to beurre bosc pears had to pivot, and some people who prefer beurre bosc pears now glumly buy the other kind.)

Stamp duty is like a tax on beurre bosc pears: you can avoid it. You can do so by not selling your house. People renovate the small house they bought at age 28 instead of moving to a bigger one, for example. Australia is obsessed with renovations, even though they are expensive compared to a new build. Part of the reason we absorb that expense is moving house is expensive, because of the tax.

Stamp duty might even cause traffic. We are willing to commute long distances in part because selling up and moving to a better-located house is heavily taxed.

The Henry Review included a chart showing how much of a hit to the economy there was from various taxes. As you will see, several of the worst ones are narrow taxes:

Stamp duty is inefficient. Australia’s economy would ultimately be bigger and we’d be better off if we could move house without being taxed for doing so.

If stamp duty’s so bad, why haven’t we already got rid of it?

It says something about how entrenched stamp duty is that it is being grandfathered out in the gentlest, kindliest way possible. The new rules only apply to new buyers. Old buyers won’t be slugged with the new fee. But that’s not all. It is also optional. If you would rather pay stamp duty upfront and avoid the annual fee, you can.

State Labor strategists are looking at an open goal. They just need to kick the ball through. The state government is obviously aware of this and rightly terrified. It has declared there will be a consultation period before it acts — which gives it the chance to back down if opposition gets too intense.

The job for people who care about good policy is try to make sure opposition to this plan is not the only voice that gets heard during that consultation period.

How to raise the GST without screwing the poor 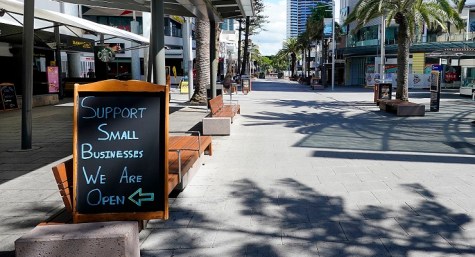 The inconvenient facts about small business

A rare occurrence from an LNP Government! It’s good policy, and Labor should just say so and back off! Learn MMT

I feel like a lone voice crying in the wilderness on this one. There is actually nothing wrong with stamp duty except for people’s view of it, engendered by years of misrepresentation. When a buyer goes into the marketplace with $1m, he doesn’t bid up to $1m and then suddenly realise that he has another $40,000.00 stamp duty to pay. He bids up to $960,000 so he can pay the stand duty. Every other buyer goes through this same process. The result is that the purchaser PAYS the stamp duty but the vendor BEARS the stamp duty – the vendor gets $40,000.00 less than he might otherwise have got if there had been no stamp duty. The only result of doing away with stamp duty is that purchasers will now have the full $1m to bid for a property, and prices will move up accordingly. As with the advent of poker machines in pubs, the only people who will benefit from this on-off increase are the first generation of vendors. Doing away with stamp duty will not make buying easier for buyers, as the Real Estate Institute claims – this is just another piece of special pleading. They will still have to find the same amount of money – it’s just that the Government will not be taking its cut this way and will have to find other sources of revenue. This is a policy change that will achieve absolutely nothing for buyers.

Just a couple of consultation period thoughts.
Item 1 – I’m not gifted in understanding taxes but in selecting the land tax option will it enable landlords the ability to claim the land tax as a deduction or will it still be looked at as an acquisition cost and thus not generally deductible.
Item 2 – To me land tax likely reduces the cost of entry of home ownership but will new owners be able to afford to pay ongoing land tax (Mortgage v Land Tax & Rates). Could new owners lose their homes because they are unable to pay their land tax. Will the NSW Government be the biggest forecloser of homes in NSW?
Item 3 – What will be the inflationary impact on rental rates as landlords seek to recoup their land tax payments. One-off inflationary impact or ongoing.
Item 4 – Wouldn’t it be better to introduce land tax after the Covid recession so as to repair NSW budget sooner instead of pushing receipts into the future. What other taxes may be raised to cover budgets deficits, which may not be efficient nor fair to cover the loss of revenue during the start up phase of the land tax.

I support the Land Tax. We should have had that instituted in all states and territories already… and certain other unfair/inefficient/regressive taxes removed. It would help to reduce the unequal disposition of the ‘economic rent’. Unfortunately, it’ll no doubt receive a similar response to another, sensible piece of policy-change that was proposed before the last federal election.

A land tax is not only efficient, it is equitable in that, unlike almost all other taxes, it taxes wealth, not income or expenditure. As Piketty so compellingly points out, if growing social and wealth inequity is to be reversed (it is at crisis levels in the USA and the UK) then the focus of tax needs to shift from income and expenditure to wealth.