As Clive Palmer loses his lockdown challenge against the WA government, let's look back on the past decade or so of Palmerisms.

Our very own proto-Trump Clive Palmer today lost his fight with the Western Australian government.

The High Court ruled that Western Australia’s border closure was valid, and did not breach section 92 of the constitution, as Palmer had challenged.

For a putative billionaire, Palmer sure does seem to face a lot of setbacks. It seems a good time to look back at the great failures of the Palmersaurus.

Palmer purchased the Coolum Hyatt Resort in Queensland in 2011 and soon announced plans to build an animatronic dinosaur park there. The park featured over 160 animatronic dinosaurs including a 20-metre long T-Rex, nicknamed “Jeff”. Jeff would, of course, eventually catch fire. Palmer’s installation of dinosaurs and signs advertising his companies along the side of the resort’s golf course eventually led the Australian PGA championship to abandon the resort.

Coolum Resort was mothballed in 2015 due to low occupancy rates, leading to a long standoff with his investors. Six hundred people lost their jobs over the period Palmer owned the complex.

In case the “dinosaur that catches fire” metaphor above isn’t quite clear enough for you, in February 2013 Palmer announced plans to build a modern-day replica of the fucking Titanic. The Titanic II was to be built in China — this was before Palmer was calling the Chinese “bastards” on TV — and recreate the ill-fated maiden voyage from Southampton to New York in 2016 (later delayed to 2018, later delayed 2020).

By 2015 Palmer’s Blue Star Line trademark was listed as “abandoned”, and the company went four years without updating its website.

Palmer bought Queensland Nickel in 2009. By 2016 it had entered voluntary administration. Palmer initially refused to pay the entitlements of the workers who lost their jobs (no one earns a billion dollars, after all), saying  “I have no personal responsibility, I retired from business over three years ago”.

He never shifted from that line, until the day he settled with liquidators and agreed to pay the full cost of entitlements for his sacked workforce.

In news that counted as surreal in the more innocent times of 2013, by the time of the December 2013 opening of Palmer’s dinosaur park, he was a member of Parliament. Having spent an estimated $80 million on his election campaign, he scraped past LNP candidate Ted O’Brien in Fairfax and saw three senators elected under the banner of his Palmer United Party.

It soon fell into disarray, with senators Jacqui Lambie and Glenn Lazarus both quitting the party before the term was up.

Despite announcing he would “retire from politics” in 2016, Palmer has done anything but. In 2018 he revived his party under the name United Australia Party — hilariously claiming three former prime ministers (members of the original UAP) as previous leaders.

Palmer famously spent around $60 million on failing to get a single UAP candidate elected at the 2019 federal election (though there’s a great deal of speculation about what effect his battery of anti-ALP advertising had on the shock result) and chucked another $8 million at achieving even less at the Queensland state election last month.

But his return to politics hasn’t been entirely unsuccessful. After all, back in June 2018 he managed to snap up no less a political talent than Brian Burston when he jumped ship from One Nation.

Oh, and one to keep an eye on: Palmer could spend up to five years in the slammer following an ASIC investigation in which he’s been accused of fraud and dishonest use of his position as a company director to funnel more than $12 million into the 2013 election campaign

Palmer says the charges are “made up”.

Rundle: the rise of Clivosaurus a product of voter curiosity

Clive’s latest challenge a doddle for the Doyen of Doorknockers 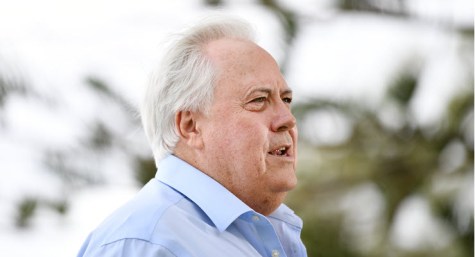 I for one was happy to see Palmer defeated, he has a long run with defeats aka. Twisted Sister and using there song and now.
I hope also that McGovern wins in court against Palmer slandering his name.
This bufoon needs a wake up call and he should just disappear out of sight.
Also all tye millions he wasted on Queensland Election for no result.

So, whose money is he laundering?

Putting his chips on the Galilee Basin might be about to become a drastically losing bet.

Like the Titanic he was going to build up in Queensland, that idea was floated and sunk without a whimper.