Chaos as democracy: here’s what’s going on behind the scenes as America decides

On paper the US electoral system seems complicated. In practice it's even more chaotic.

The oddest thing about US elections you need to know before watching today’s results is: no one’s in charge! US voting is decentralised right down to the county with rules that vary from state to state and town to town.

In Australia, we’re used to elections run and reported by independent election commissions. In the US, it’s a battleground of competing party, state and local boards and players. The ballot itself is supervised by politicians, perhaps themselves candidates in the election they’re overseeing.

So look behind the curtain. Here are the seven things you need to know:

Who counts the votes?

Lots and lots of counties. Texas has 254 counties. Even Wyoming has 23. Houston’s Harris County covers 4 million people. Loving in far western Texas has a population of less than 200.

In most states people vote in their local precinct. The numbers are reported to the county where they’re tallied with pre-poll and mail votes. (This pandemic year, early votes could be two-thirds of all votes. Some states are almost entirely vote-by-mail.)

Where are the figures?

Most counties put their numbers online, some don’t. Some states tally their counties. Some don’t.

Some report early votes on the night. Some, like Florida, North Carolina and Arizona pre-count and announce them when polls close. Some count them in the weeks after. In Alaska they start counting them a week later. Some count post-marked votes that arrive after election day. Some don’t.

Voting is voluntary, so turnout is a guesstimate. The county vote percentage reported through the night is the percentage of finalised precincts, not votes. Big precincts come in late.

That’s where the media comes in

Into this mish-mash steps the media. Historically, the broadcast figures came through Associated Press. Since 2018, the major networks (including CNN) have been using Edison Research, while Fox has its own data unit.

The data is drawn from county websites with added research. AP, for example, has 50 journalists around the country tracking the smaller counties as well as its local journalists in the larger county tally-rooms.

There’s competitive and professional pressure to get the numbers right. Famously Fox had its own reality TV moment in 2012: when Republican commentator Karl Rove disputed the figures, presenter Megyn Kelly walked the cameras into the data room so lead analyst Arnon Mishkin could explain why they were right and Rove was wrong.

How is the winner announced?

Here’s the norm: the networks and aggregators have a “decision desk” of data scientists, academics and journalists. They assess the data, together with exit polls, pre-election polls, estimated turn-out, demographics and previous elections.

It’s a thoughtful process — yes, including by Fox. It’s rarely wrong, despite Fox’s notorious call-and-take-back of Florida votes in the 2000 Bush-Gore election. Public acceptance, professional caution and television’s love of building tension pressures the desk to wait until they’re sure.

Of course not. This is television. It’s entertainment. The official count goes on in the counties for days, before votes are tallied and certified at the state level and the official winners declared. In most states, this won’t happen until late November.

Donald Trump understands that television makes reality. Australia’s own Jonathan Swan reported in Axios on the weekend that Trump is prepared to bypass the network’s caution and declare himself the winner if media counting shows he’s ahead. He’s said he’ll send in “the lawyers” to stop counting.

The networks have said they’ll be cautious about broadcasting claims, and both Facebook and Twitter have said they’ll label them as unsubstantiated. There’s plenty of nervousness about whether the Fox commentariat will be equally reticent.

So, would that be a coup?

Certainly a gulp! But Trump needs: the election to be close, Republican states to go along and courts to waive him through.

To be close, he needs to be ahead in all the swing states with Republican legislatures where polls say he’s behind. So watch Florida, Pennsylvania, North Carolina, Arizona and Georgia (plus too-close-to-call Texas, Iowa and Ohio). His campaign is working to block mail-in votes (with mixed responses from the courts) and right-wing activists are looking to disrupt election-day voting in Democrat-leaning precincts.

Right now the polls say Trump won’t have the numbers. But if he is ahead, keep your eye on what the Republican commentariat — especially on Fox — start saying. 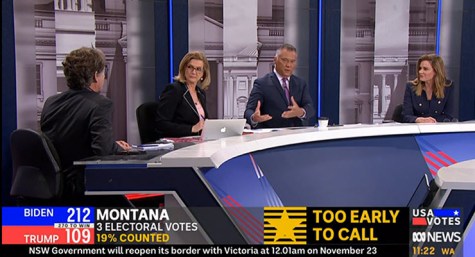 Aussie TV coverage: networks take US feeds, as the ABC wheels out everyone but Play School 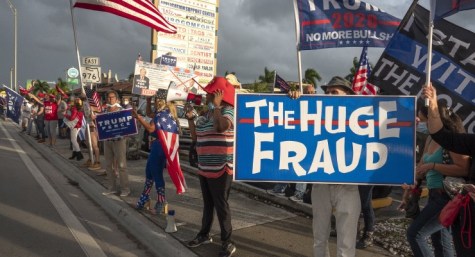 God I hope trump steals this election, America deserves it ,the hillbilly voters deserve it and Scott Morrison deserves it, Trump will drag Scomo into an unwinnable trade war with China that will decimate mining jobs, agriculture and most Australian export Industries creating mass unemployment and a major Australian recession, may then these rusted on brain dead vote conservative at any cost fools will suffer enough pain to drag them out of their political stupor.

The trade war is already happening in Australia and as far as blood on the streets in the USA, that has also already happened. I am not sure if the USA is worth saving from itself. Time Australia looked closely at our alliance and reliance on them.

Oh Brian, you significantly underestimate the ability of these brain-dead fools to maintain the faith in spite of clear evidence to the contrary.

If nothing else, win or lose, Trump has managed to demolish forever the myth of America being the greatest democracy in the world. In fact the opposite is true. It is without a doubt the most corrupt, violent and least egalitarian democracy of all OECD countries. And signs are that even if Biden wins, very little will change.

So much for fta’s.