The state of Delaware has a population of only 980,000. But it’s home to more than 1 million business entities and 66% of the country’s Fortune 500 companies. They’re not there for the view over the Atlantic. Delaware is a tax haven, where neither companies nor shareholders need to pay tax.

One of those tax-smart companies is News Corp. And, as a company built on a premise of paying as little tax as possible, it’s not surprising that through its editorial pages it attacks any government that even considers a tax increase.

When you follow the commercial interests of News Corp you realise that this is a company that puts its mouth where its money is, campaigning relentlessly for governments that make News Corp wealthier via changes to laws, policies, regulations — you name it.

Media remains the major business interest of the Murdoch family, but it’s far from the only area where the government can help their bottom line. Murdoch interests are now so widely diversified that it makes their publications hopelessly conflicted when it comes to almost any major national issue.

Inq has put together this rough guide to Murdoch’s Australia as a handy reference for novice MPs. Follow this to avoid getting a call from the PM’s office.

The war on big digital

News Corp wants Facebook and Google to hand over revenues from using its content. Murdoch sees this, eventually, as a tectonic transformation for the company and its shareholders.

News sees itself as a white knight in this battle, leading the charge for others. The Morrison government is blazing the trail internationally, though Communications Minister Paul Fletcher may have been a little too enthusiastic when he tried to cut the ABC out of any revenue deal.

The war on the ABC

As a free provider of news, the ABC undermines News Corp’s business model of people paying for content.

The company’s Australian profits last year were driven partly by a 25% increase in digital subscriptions — the model for the future. The Morrison government’s continuing funding cuts to the ABC are clearly in News Corp’s interests. And not just in news. The ABC also produces lifestyle content (cooking, exercise, etc) which competes with niche News Corp publications .

It’s not clear what commercial benefit there is for the Murdoch publications to promote climate change denialism beyond it advancing Rupert Murdoch’s standing in the pantheon of free-market moguls such as the Koch brothers in the United States and Gina Rinehart in Australia. Being an advocate for the uber-wealthy global carbon club no doubt has its own rewards.

In one little-known business venture, Rupert Murdoch in 2013 joined the advisory board of Genie Energy Ltd, a US-based company with oil interests in Israel. Other board members include former US vice-president and former Halliburton oil company CEO Dick Cheney; former CIA director James Woolsey; former US Treasury head Larry Summers; and Lord Jacob Rothschild, scion of the Rothschild banking family and long-time friend of the Murdochs.

News Corp is also backing a new entrant called PointsBet, a wildly successful company which recently listed on the ASX. 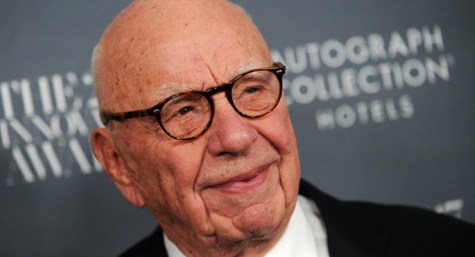 Fox Corp CEO Lachlan Murdoch has said he is “bullish about the opportunities” in digital sports gambling. The Murdoch-owned live sports streaming service, Kayo, links directly to gambling sites and has a special split-screen function which allows gamblers to view up to four live events at the same time.

The ease of online gambling has been identified as a growing problem for young men who gamble on live sport. A study by the federal government’s Australian Gambling Research Centre found sports betting had become normalised among young men aged 18-35 who watch or play sports, and that this was facilitated by “the growing accessibility of gambling and new technologies”.

However the industry’s lobby group, Responsible Wagering Australia, has powerful connections with the Morrison government. It is chaired by Liberal Party lifer and former senator Nick Minchin. Minchin replaced Richard Colbeck who left after being elected a Liberal senator.

State governments also regulate online sports betting. Their approval of sports events — including racing — during the pandemic has been important for the viability of online gambling.

State governments regulate the industry and have the power to suspend racing. The NSW government did this with greyhound racing following a Four Corners expose in 2015. It later reversed the decision.

News Corp is the majority owner of the digital real estate company REA Group (owner of realestate.com.au) which not only provides listings but has a large stake in the mortgage brokering business.

REA owns the Smartline home loans franchise which represents a network of more than 300 mortgage brokers. It has also done a separate deal with the National Australia Bank to create “a digital experience” for people to look for a property and get a home loan from one place.

The REA real estate business depends on a strong housing market. This cuts across government policies which have an impact on the market including negative gearing and immigration quotas.

Pumping up the housing market also works for another niche News Corp publication called Mansion which showcases the luxury end of the market for Australia’s wealthy.

As Crikey has reported, News Corp has a direct interest in federal legislation on the funding of class action litigation.

News Corp has donated at least $1 million to a powerful US business lobby group, the US Chamber of Commerce, which aims to restrict class action litigation in Australia and globally. A News Corp subsidiary was also forced to settle a $300 million class action in the United States in 2017.

Attorney-General Christian Porter announced that a parliamentary inquiry into litigation funding would start later this year.

Unions and the gig economy

News Corp has a workforce of 25,000 in the US, the UK and Australia. As News noted in its US securities filings last year only 5000 of those — just 20% — have union cover. (Rupert Murdoch worked hand in hand with then British prime minister, Margaret Thatcher, to destroy the UK printing unions in the 1980s.)

In Australia the Murdoch-owned Scaleup Mediafund has invested in start-up digital platforms which rely on insecure labour, paid by the hour with no holiday pay, sick pay or superannuation. One of those, Mable, has been proposed as a labour solution for disability and aged care, even though it operates outside the regulatory framework.

Murdoch publications, led by The Australian, are stridently opposed to voluntary assisted dying (VAD) legislation, which is largely a state issue.

This has formed part of News Corp’s attack on Daniel Andrews, as the Victorian state government passed VAD laws on his watch. It is unclear if Rupert Murdoch holds a strong religious view on VAD. He was controversially awarded a papal knighthood — bestowed upon people of “unblemished character” — in 1998.

Murdoch is not Catholic. He received the award after he donated large sums of money to a US diocese.

Should News Corp publications be more up front on where the company’s other interests lie? Let us know your thoughts by writing to letters@crikey.com.au. Please include your full name to be considered for publication in Crikey’s Your Say column.

We are such mugs to let our political leaders cave into NewsCorp’s interests.
Yes, I have signed the petition for a Royal Commission.
Unfortunately, just as in so many Royal Commissions including the Banking one, I expect our compromised leaders to then simply ignore the recommendations…
There seems to be very little “political cost” in blithely ignoring Public Interest and catering for vested interests.
Over this weekend (Bledisloe plus non-sport free-To-Air) advertising for gambling were the dominant category.
It looks to me that when you analyse where MPs go for their post-parliamentary career, it is invariably an Industry Lobby Group or similar.
Particularly LNP (Minchin, Pyne, Robb, Vale).
Invariably at the core of the Industry Group is maximise the groups enrichment from all ordinary Australians.
These careers are set up whilst they are still MPs and must compromise their decision-making.
Gambling, Toll-roads, mining…

“In one little-known business venture, Rupert Murdoch in 2013 joined the advisory board of Genie Energy Ltd, …”?

“It’s not clear what commercial benefit there is for the Murdoch publications to promote climate change denialism ….
Rothschild and Murdoch reportedly invested $5.5 million each in Genie Energy companies drilling for shale oil.”?

Sigh! Why can’t the old b… just die? He’s where most of the evil comes from. The world would be a much better place …

Except that little Lachie will be worse.

will be sad for folk of my age, he crueled the aspirations of the Whitlam generation and we won’t be around to hope for shirtsleeves to shirtsleeves in three generations…

Because the Ferryman of the Styx lost his boat in a climate change flood and Hell has barred his descent as he would lower the tone of the Inferno.

Murdoch’s evil empire perfectly personifies the socially corrosive company laws that licence the idea that a corporation has zero social responsibility; ie it exists only for the benefit of its shareholders. This article nicely summarises the social evil in which the Murdoch empire exclusively engages purely for profit:

I don’t get the anti-VAD thing. But I am sure that evil is its motivator.

But it doesn’t have to be like this. Much of Europe, certainly Northern Europe have very workable laws that mandate that labor and the community be represented on the boards of public companies. I doubt Labor would suffer by advancing a policy of Rhineish Capitalism.

Richard
Reply to  Been Around

Just two guesses,
The filthy wrinkled gnome either
1) has shares in old people’s homes. or
2) is afraid that before too long the family will call in the vet and he will be coerced into taking the blue medicine, like the diseased and dying vermin he is.
I would not be surprised if he is desperately funding research into living just a bit longer, in order to avoid the agony of not being able to take any of his ill gotten spoils with him. I hope that eats at him, every minute of every day.

You know how it’s a fantasy to go back in time and kill Hitler?

Needs one for Murdoch