A pocket guide to the two women leading the major parties to Saturday's Queensland state election.

For the first time in Queensland’s history, two women are competing to take — or retain — the position as premier.

It’s also only the second time in Australia’s state or federal history two women have gone head-to-head at an election for the top political position. The last time was in 1995, when Kate Carnell beat Rosemary Follett to become the ACT’s chief minister.

While the Liberal National Party’s (LNP) Deb Frecklington and Labor’s Annastacia Palaszczuk are sometimes confused for one another, their approaches and policies couldn’t be more different.

Frecklington grew up on a cattle farm. She completed a law degree at the Queensland University of Technology while raising her three children, before becoming a solicitor and partner at a law firm.

She was elected to state politics in 2012 and elected to lead the LNP in 2017 as the party’s first female leader.

Improved healthcare in regional areas is one of Frecklington’s key policies, with the LNP promising to reduce hospital wait times and invest in rehabilitation centres to address the growing problems related to the drug ice.

She has also said she will review Queensland’s abortion laws, but has refused to say whether the gestational limit to terminate a pregnancy would be increased or decreased. The party is backed by the anti-abortion lobby.

The party also says it will bust congestion by expanding several key roads.

Frecklington has proposed a six-month trial of a curfew for kids, banning kids under 14 from being outside after 8pm without an adult, and kids aged 15 to 17 from being out after 10pm without a reasonable excuse. The kids would be taken to police custody or a community refuge, and their parents fined $250.

This month Frecklington was referred to the Electoral Commission of Queensland by her own party over legal concerns about fundraising. She had attended events with prohibited donors, but she denies any wrongdoing.

In December last year, Frecklington was slammed for an interview she gave about the Labor leader. She called her opponent “Princess Palaszczuk”, saying she had an image makeover. Frecklington said she was more “grounded” because of her children — a touchy subject given Palaszczuk has been open about her fertility struggles.

Also in December, Frecklington was forced to apologise after a video made by the Gold Coast youth branch of the LNP mocked Indigenous culture. She was criticised for repeatedly using the same line — that the video was “inappropriate and the party is taking action” — at a press conference instead of addressing the issue.

In June, she survived a leadership challenge brought on by frontbenchers including her potential replacement David Crisafulli.

Raised in the Brisbane suburbs, Palaszczuk was heavily influenced by her father, veteran state Labor MP Henry Pałaszczuk. She went to a Catholic girls’ school and studied to be a solicitor.

When her dad announced his intention to retire in 2006, she abandoned her legal career, contesting and winning his safe Labor seat. She was appointed opposition leader in 2012 and has been premier since 2015.

Palaszczuk has promised, if re-elected, she would allow a vote on euthanasia within months of the election.

Labor has also said it would invest $20 million to fund teacher internships, hiring thousands of new teachers and teacher aides.

The party also says it would unlock three Queensland renewable energy corridors with a $145 million investment, and protect the dying Great Barrier Reef through new protection regulations (though their protection mechanisms haven’t been very successful so far).

The premier’s former chief of staff David Barbagallo is currently being investigated after a company he partly owned received a $267,000 government investment to develop an app.

Former deputy premier and treasurer Jackie Trad was also investigated for failing to disclose a house her family had bought along the Cross River Rail, a project which fell under her ministerial responsibility.

Palaszcuk has also been criticised for her mixed messaging on coal mines.

Last year she cleared the way for the approval of a controversial $2 billion Adani Carmichael coal mine following years of delays. She approved another $1 billion coal project in Mackay in September.

Her decision to allow football players to arrive from Victoria has also been criticised. Palaszczuk has taken a hard-line stance on keeping Queensland’s borders closed during the pandemic, which has met some criticism. 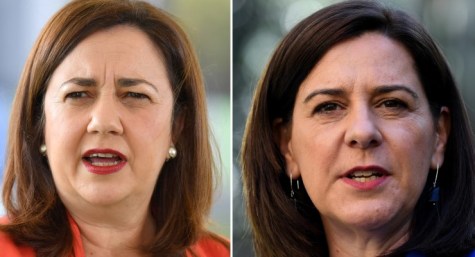 Anyone who votes LNP is an idiot. Campbell Newman Mk II.

bjb, any Greens voter in a Labor marginal seat (say Townsville or Mundingburra) who preferences Labor ahead of the LNP thus securing a Labor majority will soon find a coal-dusted Labor jackboot on their neck. How a Green or StopAdani voter can support Labor after all the secret deals and outright cash support for thermal coal mining in the Galilee Basin defies logic. Any vote for Labor is a direct vote for Adani.

Australia including state gov’ts is, like the US in the position of evil and lesser evil. If you look at the QLD ballots, it’s greens and then the rest is pretty much right wingers and nut jobs, including Labor. QLD labor is just less evil then the LNP.

Also Frecklington’s far right fundamentalist christian views need further examination and exposure. Her voting record is not one that could give anyone who is not a white straight married privileged right winger any comfort. A massive danger for Qld.

Trad is not Deputy Premier not Treasurer

thanks for the article, ‘not sure enough has been made of the LNP’s approach to the environment. They want less regulation on the Great Barrier Reef, Tree clearing and defund the Environmental Defenders Office.