Everywhere you look in the Morrison government, you see sleaze and self-interest, if not outright corruption. Merely itemising the current scandals on foot is an arduous task.

The million dollars paid to a Liberal mate for government advertising without the inconvenience of a tender. Christine Holgate’s spending habits at Australia Post, all approved by a Liberal-stacked board. The expenses scandal at ASIC that has already cost that regulator a deputy chairman and is likely to cost it the chairman. The ongoing investigation into the 1000% mark-up on the Leppington Triangle for a Liberal donor.

The festering sore of the Community Development Grants program, a scandal 10 times bigger than sports rorts. The soft pedaling of the ACLEI’s investigation into Home Affairs and Liberal donor Austal. The long-running harassment and prosecution of Witness K and Bernard Collaery for exposing the corruption of the Howard government in Timor-Leste. Allowing executives of fossil fuel donors to write energy policy.

And, of course, the now years-long wait for even a pale shadow of a federal anti-corruption body.

Of all of these, Scott Morrison only confected high dudgeon about Holgate, his marketing skills having alerted him to the toxic combination of the words “Cartier” and “not taxpayers’ money”. Otherwise, his moral compass remains unmoved.

A number of the scandals have their genesis in the Abbott and Turnbull governments; Morrison only inherited some; others are of his own creation.

But all reflect two themes that have run through this government from day one in 2013: that it’s OK to use taxpayer money, and taxpayer-funded positions, for your own benefit, and the benefit of your mates, and for the benefit of your party; and that there are no consequences for failure and scandal, unless political calculation necessitates them.

Those themes are potent indeed. Governments do not operate in a vacuum. The tone and example set by governments has impacts that ripple outward. First to the bureaucrats who serve governments, then businesses that work closely with government, then the broader business community and then, eventually, the whole community.

When a government appoints scores of former Liberal MPs and staffers to publicly funded offices like the AAT; when it hands a million dollars to Liberal-connected pollster without process; when a deputy PM creates a taxpayer-funded job for his new girlfriend; when it gives over $440 million to a tiny Great Barrier Reef charity run by people connected to the Liberal-allied Business Council without process; when it carefully spends taxpayer money to service its electoral needs; when it hands tens of millions of dollars to its mates at News Corp without process — it sends a clear signal.

Taxpayer funds are there to help you and your mates. And looking after mates is the explicit foundational value of the Morrison government.

The message has filtered out to the bureaucracy. To Australia Post. To ASIC. To someone in the department in charge of valuing land in Western Sydney. To the Health Department, which looked the other way rather than do anything about Bridget McKenzie allocating grants without any legal authority.

It has filtered out to one of the government’s favourite consultants, KPMG, and every other major consulting firm that has latched firmly onto the taxpayer teat in recent years while delivering what ministers want to hear rather than quality policy advice. To its shipbuilder Austal. And it filtered out to the Leppington Pastoral Company plenty good.

And when ministers are caught out lobbying for their family’s business interests, or pedalling forged documents without consequence; when a department like Home Affairs can be repeatedly assessed as incompetent in the use of its powers and its expenditure of billions of dollars without any repercussions for its secretary or minister; when over a hundred thousand Australians can be targeted by an illegal scheme like robodebt without a single bureaucrat or minister suffering any consequence; when forensic independent reports by the auditor-general are dismissed by senior bureaucrats and the funding of the Australian National Audit Office is cut, when those who seek to hold the government up to scrutiny are raided, rather than rewarded, that too sends a signal.

Accountability doesn’t matter. You don’t need to fear the consequences of misuse of taxpayer funding.

“The standard you walk past is the standard you accept,” David Morrison famously said. For the Morrison government, it hasn’t merely accepted the low standards that have mired federal politics in sleaze, it has actively promoted them.

This is the result. 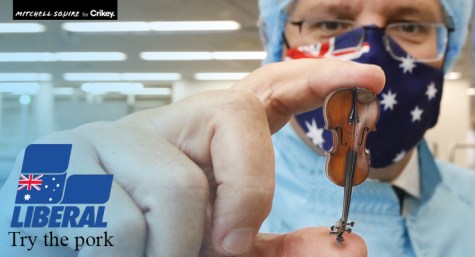 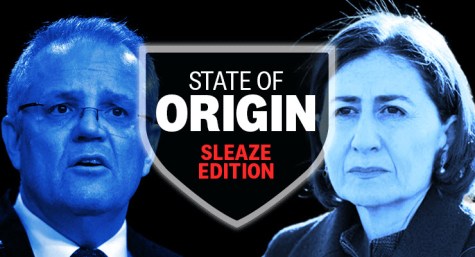 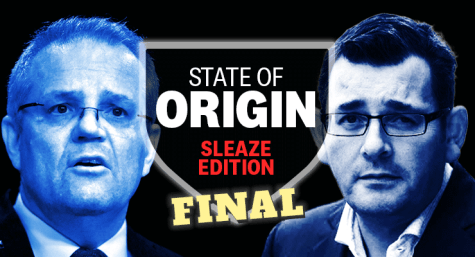 One for the true believers. Almost makes up for going AWOL yesterday.

Chris B
Reply to  MikeinBarton

We’ll have to redefine ‘true believers’ in these post-reality times, given Mr Morrison’s cult ideology. The ‘boys’ to whom the jobs and loot were once assigned are no longer nepotistic private school-linked cliques. Now it’s all about evangelical, Trump-loving, end-of-timers, who quite literally pray (or rather sing cheesy Christian pop-rock ‘power balleds’) for us all to die so they can get their 1000 years of paradise. Post service, it’s all about helping out mates with lucrative jobs, contracts and ‘opportunities”.
The funniest part is that they enjoy tax free status.

gary armstrong
Reply to  Chris B

MikeinBarton
Reply to  Chris B

I don’t see any need to redefine ‘true believers’, they value effective corporate governance, evidence based policy making and sound public administration for the purpose of a just and productive society.
Faith or religious conviction has nothing to do with it. What consenting adults worship is none of my business, unless they try to impose their deities and dogma on me or suppress the rights of others.

The intention of PJK when extolling the “true believers” was to give the “rusted on” (™Whatever I can Take Richo ®) a, slightly, less dismissive appellation.

Rotten to the core. The whole stinking smirking lot of them make me sick, and it baffles me why more Australians aren’t outraged, and demanding they be removed from office. And then arrested to face charges for fiddling that nation’s books so deliberately and greedily.

Given most Australians are at least two of greedy/selfish/stupid, it’s easy for the LNP to appeal to their greed and venality, as we see every election.

“Greedy/selfish/stupid”. The media play up to this as well. Every budget you hear/read of “winners and losers”. Every election campaign there are media stories of spending promises and funding announcements as politicians move through the hustings. In Australia, democracy is most definitely transactional and the media, including the ABC, help perpetuate this.

Best exemplified by that ugly, not to say sexist, metaphor “the hip-pocket nerve”.

Not to mention the sexist “Boys club” as if there are no women with their noses in the trough.

Too much of the media use their own positions to play their own politics – seeing what they want to see and pass on what suits their narrative and agenda.
To criticise (actually do the job : holding to account) means having access denied.

There is an element of truth in this sweeping statement. It may also be an eternal truism. It does deflect attention from the rotten fish.

Because they cant see it.

Don’t be baffled; it’s ‘aspirationalism’, which means the blithely un-outraged populace aspires to be like those rip-rorters and tax-teat-suckers. They’re ‘outraged’ because they’ve absorbed the mantra of ‘the politics of envy’. And are easily assuaged by tax cuts the country can’t afford. If it were a Labor government presiding over this, there’d be a deafening clamour for their removal.

That should be ‘They’re NOT “outraged”…’

Too many are struggling to cope with no income and loss of accommodation a looming threat.

I always thought that dishonesty and corruption were frowned upon by any of our western religions,our Prime Minister claims to be a Christian .He is obviously a Hypocrite,and yet no one publicly calls him out.Where are the Church Leaders decrying his corruption and his pretence of Christianity.We need a more robust media and commentary from The Labor Party and the Unions.But I guess that might be a step too far,be interesting though.

Western religion be it Catholic or Protestant would be the most corrupt invention ever devised by man. I won’t blame women for it.

Hillsong are known for speaking in tongues, forked obviously being one variety of tongue.

The gobsmacking hypocrisy of Morrison claiming to be religious and at the same time cynically manipulating and presiding over such a litany of corruption is interesting isn’t it?

Oh, methinks Morrison has a way to go yet, Jen.

Red Cross and Vatican helped thousands of Nazis to escape
Research shows how travel documents ended up in hands of the likes of Adolf Eichmann, Josef Mengele and Klaus Barbie in the postwar chaos

Opus Dei was founded in Spain, so it’s far from surprising someone like Klaus Barbie found his way to Bolivia.

Morrison’s bible studies have, I suppose, not quite got as far as Exodus 23. He’s in for a bit of a shock when he finally gets that far::

1 Do not spread false reports. Do not help a guilty person by being a malicious witness.

8 Do not accept a bribe, for a bribe blinds those who see and twists the words of the innocent.

9 Do not oppress a foreigner; you yourselves know how it feels to be foreigners, because you were foreigners in Egypt.

Isn’t Exodus pretty early on in the Bible? He obviously didn’t get very far.

Perhaps he reads it backwards?
For an apocalyptic the Big Bang would be at the end of the narrative.
Back to the Void.

A Christian of Convenience.

The standard any politician walks past is the standard their voters will accept. It is clear, that at the ballot box, ethics is not a vote catcher.

Really, is there a better sharper political commentator than BK in Australia. That you have to wade through swathes of polite insider commentary and the Murdoch sewer to get to an article as succinct and powerful as this makes the journey a little more tolerable.

The main problem I have is that this is not free and I cannot readily share it on social media. Misinformation from Murdoch sewer is freely available as quick and easy to share sound or news bits on news aggregating sites also on youtube. Wonder no more why misinformation, lets call it blatant lies, proliferates.

Blue tongue – Just highlight the text, copy it and paste it directly on to your FB or Twit page.

I do that. But it depends on me pasting to my tiny cohort of 20 fb friends. And it won’t be found on any search in smoogle news. Many hurdles to overcome to be seen.

Get all your friends to subscribe. It is a miserly sum in the scheme of things. Post that proposition on Facebook. Also, good Christmas present….if the stuff is readily shareable, it becomes harder for the publication to survive. The aim should be to make good news sites hot commodities that people want to pay for.

The quality of BK’s work just shines in comparison to the bilge pumped out by most of the gallery – the recycled press releases and talking points, the horse race commentary (check Kieran Gilbert’s Twitter feed today, the outright cheerleading from the Murdoch press. Australia is so badly served by most of the media who are either too dim, incurious or in bed with the politicians to tell it like it is.