The political party we were (sadly) destined to have. Plus, Jeff Kennett gets in a tizzy, and more tips and murmurs from the bunker.

Ain’t no party like a No5G party It was inevitable that this would happen. With conspiracy theories the defining political currency of our time, a new political party has popped up to take advantage. Over the weekend the Australian Electoral Commission announced a notice of application for registration for the No5G Party.

The anti-5G movement has been joining the anti-lockdown and QAnon protests over the past year. Given the times we live in, let’s brace ourselves for a world where they somehow have the balance of power after the next election.

Kennett Jeff! Former Victorian premier and Crikey’s estranged grandfather who hates us Jeff Kennett has never held back on social media, and over the weekend things went up a notch. He went from commenting approvingly on his own post believing he was logged in as someone else to inciting lawlessness among the public.

Responding to current Premier Daniel Andrews’ delay in announcing further easing of lockdown, Kennett got so upset he forgot how to spell the word throw: “Encourage businesses to prepare to open and then again slam the door in their faces. I say open up businesses, and let this control freak through (sic) us all in jail…”. 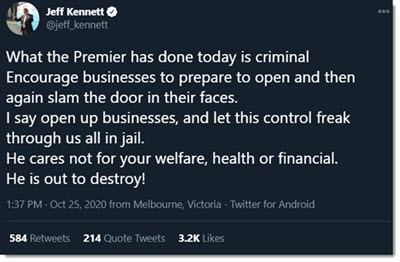 Kennett probably ought to be careful — after all, one of the ways Andrews earned the “Dictator Dan” moniker was sending the cops ’round to the houses of people talking out of turn on social media. Just ask Zoe Buhler, the pregnant Ballarat woman arrested for suggesting a protest on Facebook in early September.

Sex discrimination Crikey has long followed the system of discrimination against sex workers and brothels by Australia’s biggest financial institutions. The report in today’s Australian Financial Review confirms what we already knew: that NAB is the most explicitly discriminatory of the big four.

The piece argues that this puts NAB “out of step” with the other big banks, which is true to the extent that “representatives from ANZ, CBA and Westpac said they had no such policies regarding the legal sex industry and provided services to business customers on a case-by-case basis”.

But of course, the absence of a policy is not the same as avoiding discrimination. As our previous coverage has shown, the ability for arbitrary discrimination is just as likely on a “case-by-case” basis.

Improving ethics and the bottom line In light of *broadly gestures at practically everything to have happened in the public square in Australia over just the past few weeks*, no one would argue that there’s a excess of ethical behaviour among our most powerful. Of course, the offset argument is that a certain ruthlessness is required to get ahead — late capitalism and all that.

A new report commissioned by the Ethics Centre (which is led by Crikey contributor Simon Longstaff) argues that ethical behaviour is not merely the right thing to do, but that there’s actually a concrete identifiable profit to be made from it.

According to the report by Deloitte, increasing the subterranean levels of public trust and improved business and individual ethics could improve mental and physical health, business reputations, and lead to smoother functioning of the economy. It estimates this could lift GDP by $45 billion.

At the very least, things simply couldn’t be a great deal worse.

Good morning, early birds. Scott Morrison's plan to evacuate 600 Australians from China and then quarantine them on Christmas Island has sparked criticism, and Huawei Australia has gained a second wind. It's the news you need to know, with Chris Woods.

Good morning, early birds. Australia has pushed for the UK to follow suit on its Huawei 5G ban, and new shadow Home Affairs spokesperson Kristina Keneally makes a case for immigration. It's the news you need to know, with Rachel Withers.

It wasn’t the Premier who “sent the cops ’round”; the police did themselves. Imagine the uproar if he HAD instructed the police! Then there would be grounds for concern.

Charlie, you seem to be intent upon becoming the click-bait reporter for this publication. For the younger readers you might have provided a bio of Kennett as a politician and as a Premier and then as a promoter of social self-help site. The “folding” of Andrews today has come from a number of directions and Kennett is far from being alone in disparaging Andrews. As to lawless statements made by radio announcers you might have included the Cronulla Riots of 15 years ago.
Worst of all, with regard to your article, is the (on faith) declaration from Deloitte that if we all smiled and were nice to one another the GDP could be increased (magically?) by $45b.

This approach to business and social life OUGHT to fit in well with ScoMo because it does possess biblical antecedents but the question,
Charlie, is : has anyone (including YOU) undertaken any f’ing analysis of the apparent model or publication and what, in the name of your
favourite deity, was used in place of a methodology? Indeed just what (specifically) was the methodology? gessus!

Re ethical public behaviour: Thanks Charlie for reporting the obvious logical fact the ethical behaviour simplifies society, and consequently its economy. But why is that obvious human insight not already integrated into the profit motive? I suggest that it is the liberalisation of predatory capitalism over the past 30+ years motivated by the toxic belief that greed is the ultimate motivator. I wonder when the IPA will get around to that report.

Dounreay
Reply to  Been Around

Too many youngsters sought to emulate Gordon Gecko as a role model and they are now rampant in commerce.

Why does an ad for NSW solar rebates in Politiko feature a picture of Scott Morrison?