Fears are growing about how the Thai military will respond to a protest movement calling for major political reform.

When Thailand’s quasi-military government finally turned on protesters last Thursday with a typically ham-fisted overreaction that included water cannons and a slew of arrests, it only served to further anger a population fed up with the six-year administration of Prime Minster Prayut Chan-o-cha.

The popularity of the street marches, a long-favoured tactic of Thais who oppose the ruling government of the day, and one that has been effective in the past, has spread into broader society. Originally fomented by student leaders in July 2020, they have their genesis in the government banning of the Thai Future Forward Party and its charismatic leader Thanathorn Juangroongruangkit in February.

An emergency decree forbidding the assembly of more than five people and publication of information that “could create fear” or “affect national security” has been summarily ignored by protesters who have adopted the defiant three-fingered salute of rebels in The Hunger Games franchise.

“If people weren’t angry before Thursday they are now,” one local observer told Crikey. 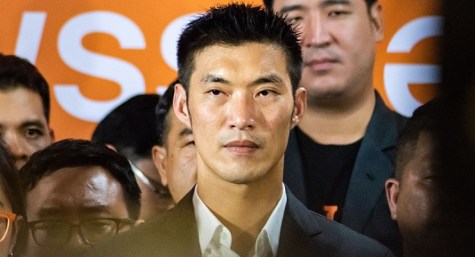 Protester are demanding the amendment of the country’s constitution and the resignation of Chan-o-cha, who seized power on behalf of the military in a 2014 coup d’état following the last wave of street protests.

Underpinning dissatisfaction with the government is the dire state of Thailand’s economy, which has been smashed by the coronavirus pandemic. As much as 20% of Thailand’s GDP is directly and indirectly attributable to tourism.

Exports, the other non-consumer pillar of the Thai economy, were already teetering before COVID-19 hit; they are forecast to fall 8-10% this year, taking consumer confidence with them.

Most controversially, protesters are demanding reform of the monarchy, an institution that was both widely loved and out of bounds for any public commentary before the ascension of the current monarch King Maha Vajiralongkorn (or Rama X) in 2016.

The king has spent most of his time since 2007 living outside Thailand — primarily at a castle in southern Germany with a retinue of 200 retainers. He has also shifted the royal finances — worth tens of billions of dollars — from the bureaucracy to his personal control. In the present state of economic gloom this has not played well.

He has further angered regular Thais by sheltering in his European residences during these past six months. Open dissent is now common, despite the threat of 15-year imprisonment under the country’s strict lese majeste laws which can be invoked for insulting the monarch.

Many fear the king is now attempting to bring Thailand back to the centuries-old absolute monarchy that ruled before the military intervened in 1932.

Yet the king’s chickens may also be coming home to roost in other ways, with growing anger inside Germany that a foreign leader of a nation prone to human rights abuses is ruling from German soil.

There are also fresh concerns in the West about the level of Chinese influence in Thailand. Under the military’s latest rule, the country — a key ally of the United States — has drawn closer to China, buying Chinese arms and welcoming a tsunami of investment.

Still, amidst its myriad problems, one fear in particular is looming: that the Thai military may repeat the bloody actions of the October 6, 1976 massacre of protesting students at Bangkok’s prestigious Thammasat University. Officially 40 were killed but the real number is believed to be higher.

“Under the military’s latest rule, the country — a key ally of the United States — has drawn closer to China, buying Chinese arms and welcoming a tsunami of investment.”

China once again making the world safe for dictators