He might not have planned to get COVID-19, but Trump is certainly making the most of the extra press coverage.

It’s a wonder Donald Trump required oxygen for his health last weekend given he’s sucking so much of it out of the media coverage of the election.

Until last weekend the Biden campaign was outspending Trump two to one. In September the figure was even greater, with Biden spending $153 million on advertising compared with $57 million.

But who needs to spend on ads when you can get 24/7 news coverage?

Courtesy of his COVID-19 diagnosis, Trump is now so dominating the narrative that it raises fears of a repeat of 2016, where it’s estimated he received anywhere between $2 billion and $5 billion of free publicity.

In his weird wacky self-obsessed world, all PR is good PR (see his ludicrous joyride around the hospital yesterday).

For those who assume that all this negative press will only work against him, just remember it also makes it harder for the Biden campaign to push their own message or even just remind voters of the alternative to Trump.

While the president presumably did not want to catch COVID-19 a month before the election (despite doing everything to make himself vulnerable), it did have the effect of changing the story from his disastrous debate performance.

That debate was only 48 hours before, but that’s a lifetime in Trump news cycle terms.

It hasn’t gone unnoticed that whenever Trump has been involved in a PR disaster, you only need wait a day or two for him to do something spectacular (usually spectacularly stupid) which has the media looking over there instead.

In this case the media had no choice but to report the health crisis of the commander-in-chief, but you still felt he was pulling their strings as the networks dropped normal programming and went to rolling Trump coverage all weekend.

Comparisons have been made with the appalling photo opportunity in June, where peaceful protesters were tear gassed so he could waltz over to a nearby church to wave around a bible.

It certainly threw the spotlight back on him instead of the protesters — and far from damaging his campaign within months many feared he was back in the race.

On Friday the left was euphoric that the karma of Trump contracting COVID could represent the death knell for his campaign, taking him out of the final weeks before the election.

After his typically bizarre behaviour since then, they might want to think again. Short of being put on a ventilator, which now seems unlikely, Trump ain’t going anywhere.

Indeed, this morning he not only announced he’ll be heading home but tweeted “don’t be afraid of Covid. Don’t let it dominate your life”. In his upside-down world he’s turning a negative into a positive spin for his failures. Whether it works will depend on the Democrat’s response.

The Biden campaign’s decision to stop negative ads was probably admirable at first. But once again they should reconsider taking that risky high road strategy.

With billions of dollars worth of free Trump coverage now guaranteed, they will have to use their funding advantage to come up with a much better advertising campaign.

Joe Biden might feel it best to keep above the fray, but he’ll want to hope that his VP pick Kamala Harris doesn’t screw up the debate later this week. Against Mike Pence, the Michael McCormack of the US, the odds are good. 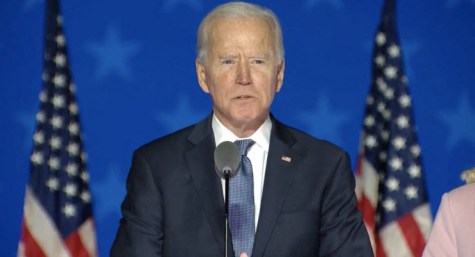 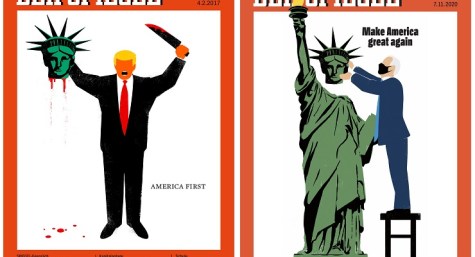 He appeared out of breath, strained, unhappy and worried when he arrived back at the White House and took his mask off. He might want to pretend he’s well, but his face suggests otherwise.

Even if one summons up facts, truth as can be perceived, known statements from witnesses, course of events, it seems that Trump and his bumboys have cobbled up a plan, plot, superlie, course of intrigue, a scam and fraud. But, as the “man” is a grub, and lower than a bug’s bum, what would one think. All seems too far fetched, cunning, yet Goebbels was actually clever, so copying lies ansd distortions appeals to the Trump Dump of primitive off cuts. No obituary yet…

Running around like the Red Queen from Alice in Wonderland, shouting “off with their heads” about his courtiers Barr, Pompeo and Wray must surely be giving intelligent Republications cause to reflect on whether the US can afford a commander-in-chief that alienates the US from most of the public-Murdoch Press excluded-in other countries.

Seems just like a look over here trick while country wide the Republicans are dismantling the ability to vote by all sorts of means- in Idaho I think tens of thousands of postal votes have been destroyed, in Texas most polling booths have been closed, thousands of intimidating polling observers are being gathered, electoral college representation being manipulated, and so on. A truly frightening time in USA.
If he ever had the virus, Trump seems unconcerned about spreading it, and his behaviour is becoming increasingly unhinged.

I just heard that in Texas you can’t post your mail-in ballot – you have to place it in a special ballot box, of which there is one per district.

And in some places, the ballot boxes are in government departments, like the DMV.

In any decent democracy that would invalidate the entire Texas vote.

Have no problem with Media highlighting Trump’s antics. But Media, what about balance? Trump consistently ‘bags’ or minimises danger of Covid-19. He regularly messages White House Staff (employees) that virus irrelevant, social distancing stupid, and wearing a mask ridiculous.

Result? Staff now infected. Media show no interest in Trump’s duty-of-care lapses nor infected staff current health? Does Media believe Trump’s medical support replicated for each and every Staffer? If so, how come only their “great man” back at work feeling twenty years younger? For that matter, how is First Lady progressing?

We all know what to expect from Trump. But what about the two hundred and ten thousand dead Americans so far, on Trump’s watch? Media collusion?

If only every American could see, and understand, todays First Dog cartoon in the Guardian.

I’ve sent it to a couple who are forwarding to all their friends.

Meanwhile America slides from democracy to idiocracy and manacled freedoms.

Democracy?…….what rock have you been hiding under…….its gradually become a kleptocracy beginning in 1914 and maturing with JFK’s murder.