An organisation appointed to provide a surge workforce for aged care facilities is backed by a powerful business network with connections to the Liberal Party and News Corp.

An Inq investigation has found that an organisation appointed by the federal government to provide a surge workforce for aged care facilities is backed by a powerful business network which includes Liberal Party donors, members and campaign helpers.

Within four days of being appointed, however, the company was unable to provide staff for Sydney’s Newmarch aged care facility, leaving Newmarch — which had lost 87% of its staff — to beg the federal health department to find “other avenues … to source suitable and skilled staff”.

Mable’s shareholder list includes a number of individuals with ties to the Liberal Party, including: 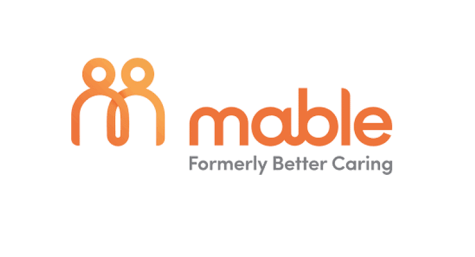 Mable Technologies has also been backed by Scaleup Mediafund, a media-for-equity fund owned by News Corp and other Murdoch media businesses. The grouping, closely associated with Lachlan Murdoch, is made up of Fox Sports, Foxtel, digital advertising company REA Group and Nova Entertainment (owner of metropolitan radio stations). The Ten Network is also part of the group.

According to Mable, Scaleup has provided around $500,000 in advertising and marketing for the company, promoting the Mable name across Australia. It boasts that its network reaches every Australian household and can deliver “every target demographic with brand and direct response advertising”. In return for promoting the Mable name, Scaleup has a minority shareholding, meaning it too stands to benefit from the government contract awarded to Mable.

A grouping of former News Corp executives, operating under the umbrella of Macdoch Ventures has also invested in the business.

The Mable platform functions as a marketplace catering to a growing need for aged care as well as disability care under the National Disability Insurance Scheme (NDIS). The platform does not employ carers. Instead a would-be carer is a “member” of the platform. They upload their profile to the site and the client gets to choose who they will employ, using money from government-approved home and disability care packages.

Mable is not a registered NDIS provider. Nor is it an approved Home Care Package provider. So how did the government come to appoint Mable to provide the essential backup workforce for Australia’s aged care staffing crisis?

The Health Department said Mable was “directly sourced” in line with “procurement guidelines”. This was a limited tender with Mable being the only supplier.

And what did it get for the near $6 million contract?

Mable told Inq “a number of facilities” had accessed its platform, though it didn’t say how many workers that meant.

Aged Care Minister Richard Colbeck didn’t respond to Inq’s questions on whether or not Mable’s powerful network of backers played any role in the company being granted the contract. Mable told Inq that co-founder Peter Scutt had been “engaging with various levels and sides of government over the past few years to explain its model”. It said that no shareholders of Mable, nor any of their connections, were “in any way involved in discussions with the government regarding the contract”.

Mable advertises that it has more than 10,000 “members” on its books. Yet when the crunch came, it was found wanting. 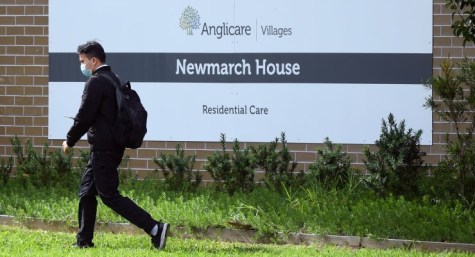 “Early on they just weren’t up to the task. It was dangerous for them,” he said.

As COVID-19 engulfed Newmarch House, Anglicare spelt out its problems with the staffing solution in an email to the Health Department:

“As you would be aware, we now have 20 residents and 11 staff who have tested positive and both cohorts are undergoing an extensive testing regime and we expect the number of infections to escalate.

“Mable did have a significant number of staff who applied through their website but most were not suitable or did not want to work in a facility that had positive cases of COVID.”

In an email to Inq, Mable concedes there were “some teething issues” with Newmarch, but said that these were resolved after the first few days. Anglicare’s CEO told the royal commission that ultimately Newmarch was supplied with some “very capable people” once “the requirements and specifications for the particularly challenging environment were better understood”.

“These learnings,” Mable told Inq, “helped with subsequent use of the Mable platform by other residential aged care facilities.”

At the same time the Mable labour supply model, experts argue, represents a highly insecure form of employment, with no allowance for sick days, holidays and no guarantee of continuity — a position not unlike the employment model used for hotel quarantine guards.

A Victorian government inquiry into the so-called gig economy, commenced at the end of 2018, highlighted the insecurities for carers getting work using the Mable model. The inquiry reported in June this year that Mable had no process to “onboard” carers. Nor did it have a mechanism for sorting out lack of payment. That needed to be done between the carer and the recipient.

“It’s a platform that enables ongoing relationships to form. The client’s needs are ongoing. The consumers and workers agree on all aspects of their engagement together,” he told Inq.

This “relationship-based care”, Scutt maintained, offered “flexibility in scheduling that works positively for both consumers and workers”. 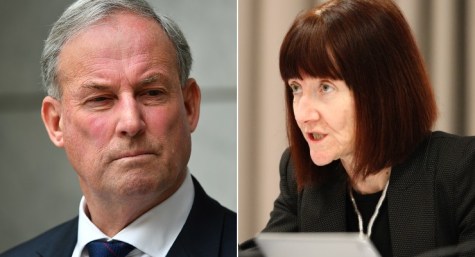 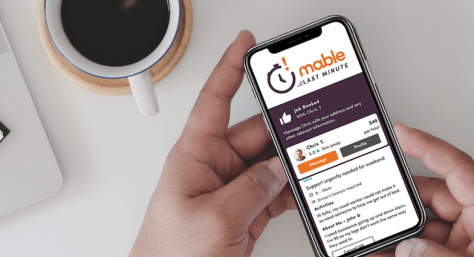 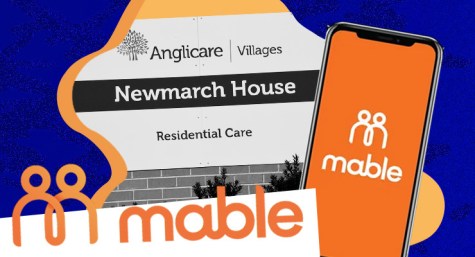 Ironic isn’t it – the right wing are always crying out for lower taxes, but always quick to gets their snouts in the trough for government contracts.

I guess this is just another way of transferring the wealth of the working class to the rich and well connected.

It really doesn`t matter how corrupt the coalition and scomo are or what the guardian digs up and exposes because 51%of the brain dead electorate will support them regardless, Scomo knows this and treats the Australian electorate with the contempt it deserves while Labor keeps promoting its leaders on seniority not leadership capabilities and hides under their political bedsheets in case they offend someone or anyone for that matter, somebody should make doll figures of Shorten and Bowen so we can stick needles in them as punishment for their stupidity and arrogance that allowed Scomo to win the unwinnable election.

Sure Labor could have done better at the last election. But it’s hardly fair to sheet home the whole blame for the last federal election defeat to Labor when even the experts can’t pinpoint exactly what went wrong. What is obvious, though is the role of the conservative press who control most of what is read by most Australians. The job of Labor winning is bloody hard, maybe impossible. Unless people who care enough to get involved do so then we are destined to have the mistakes of the past repeated again and again. The Gold Coast bears this out. In spite of corruption and demonstrable acute lack of doing anything for the population at either state or federal level the people continue to vote again and again for the LNP. But nothing will change unless people get involved to address the imbalance.

Labor actually won all states except Queensland and WA.

personally My belief is that Scotty (from marketing) was rewarded by his God, for his hypocrisy, in the ” Miracle” win.
Certainly the true miracle was Labour in not winning.
Can you imagine how Labour and Bill would be suffering now had they won?
Even if they had done exactly what the Libs are doing, or better, the Lib and media pile on, howls and accusations would be loud and long. See Dan in Vic. as an example
Bill Shorten must be feeling very lucky, and Scotty’s God snickering up in the clouds.

Which god do you mean. Happy clappers and prosperity religions seem to have so many variants on what they call gods.

Nice try SM, but labor lost because they weren’t bold enough. They too are so beholden to their corporate donors, they couldn’t promise what the majority of us, especially the younger generations, actually want. Jobs, affordable housing, cheap energy, real action on climate change and, just for fun, let’s throw affordable dental care into the mix.

I know pigs will fly before it happens, but wouldn’t it be refreshing for the labor party to actually become a party for the people. Maybe even try crowd sourcing for funds instead of relying on corporate donors.

Margaret, the “experts” know alright, they just can’t find a way to break it to the Labor glitterati in metro Australia.There is a ‘base’ in Labor that organised the coup against Rudd, that supports development of the Galilee Basin thermal coal deposits in Queensland and that sits to the right of Joel Fitzgibbon and much of the LNP. They don’t care who wins any election so long as they control the Labor party, particularly the purse strings. They might just pull it off with Palaszczuk on 31 October but Albo and just about anyone else bar a woman, has no hope federally until the religious hard right unions and factions are brought to reason. Reason? FFS, Hanson has more of that than half the current, voting ALP. So many have walked away to Hanson, Palmer, Katter even the LNP. When will the city slickers pull their blinkers off?

Murdoch press – hard if not impossible to fight against. Watched 1st episode of Murdoch dynasty on ABC but even that reinforced my belief that whoever their press vilified – that person was perhaps a good choice as against the opponent. Amoral, unethical, power hungry.

I watched all three episodes of the Murdoch Dynasty and was left with deep disquiet for Australia’s future.
The power of media undermines real democracy and renders us no better off than those corrupt countries where votes are bought and fiddled.

The most morally corrupt, devisive Government ever.
Appointing failed ex Libs to top positions, underhand dealings to mates and allies, dirty shady deals perpetrated under the guise of charity.
Everything this Government has done has a high rate of dirty dealings.
Appeals to Christian lobby to be backed, screams bloody mindedness at Unions whereas his mates and backers are corrupt aka MURDOCH and the founder of HILLSONG, allows his mates and the mad monk to travel overseas amd yet Aussies trying to get back or have pressing business to attend to cannot het a look in at travel.
Dirty, underhanded, rotten to the core and stinks to the high heaven

Reminds me of what I saw on Mike Moores documentary last night which included a feature on the township of Flint. Rigging a state emergency to replace the Mayor so that the Republican Governor could set up a private water system to service the town but which poisoned a lot of their children and adults with lead. We need to be so aware of corruption happening here in Australia with the politicians push for privatisation

I nearly ditched Moore’s film last night, right when he looked like he was going to resort to the ‘Russians did it’ rubbish.

But, my whole attitude changed, when he described how 1 woman was primarily responsible. Killary, I thought?

Nah. Gwen Stefani!! By Moore’s telling, Trump only decided to enter the primary race cos he was pissed Stefani got paid more than he did for being on the telly.

Haven’t watched it all, as yet, but Gwen saved it for me!!

Truly nauseating watching telly ‘executives’ laughing about Trump having no chance, but being such a boon for ratings – ‘We’re raking it in’, to paraphrase what one said, smashable grin on his dial while he said it.

All played on the Murdoch ‘home ground’, too.