What's the go with Graham Richardson's bizarre rewriting of the Dismissal for The Australian?

What’s the news from Richo’s Chinese restaurant, where Labor grandee Graham Richardson writes his column for The Australian on an Inn of Celestial Happiness napkin before doves whisk it away to Holt Street?

According to Richo’s column today, Gough Whitlam stuffed up the Dismissal:

Magnificence and majesty aside, Whitlam could be both the lion and the lamb. When informed by Sir John Kerr that he and his government had been sacked, Whitlam calmly returned to the Lodge and ate a steak for lunch.

Had Paul Keating been the PM he would not have accepted this fate meekly. He would have had the parliament recalled to pass a vote of confidence in the prime minister and the government.

Yeah, uh, actually, Yoda, parliament didn’t need to be recalled because it was still sitting while Gough had his steak. The Senate passed the supply bills, the House then voted confidence in the (now returned) “member for Werriwa” and speaker Gordon Scholes attempted to communicate this to Kerr so that Whitlam would be reappointed.

Kerr refused to take his call, or see him, and then prorogued parliament, with Fraser still prime minister. This is all a matter of public rec-… It’s in Hansard! It’s in sodding Hansard.

Indeed Whitlam always maintained that this preemptive prorogation was the truly unconstitutional act by Kerr (in the Palace Letters, Kerr explicitly tells the palace that he considered the prorogation to be an extension of the reserve powers). Had Whitlam “recalled” parliament unilaterally after that, Australia would have had two governments.

Richo ploughs on: “[Keating] would have ensured that every Labor MP and senator remained at his or her post.”

Oh, and this is the best:

Many remember exactly where we were when we first heard of the dismissal. I was on my way out of the ALP office in Sydney’s Sussex Street and I had one foot already in the lift. This day of infamy will never be forgotten by the Labor Party and its supporters.

Of course he remembers! It was just after noon. He was interrupted on his way to lunch! In Chinatown! Shame, Fraser, shame!

How embarrassingly stupid is this article? Well, the random beginnings — “I never got to hear Julie Andrews sing live but I have seen The Sound of Music at least 100 times” — is not the dumbest thing about it. The dumbest thing is that this admonition of Whitlam for giving up at lunchtime is illustrated by a photo of Whitlam, at parliament, in late afternoon, having just spent several hours resisting Kerr.

What the hell is going on here?

Insofar as Richo has a plan these days other than more abalone, it seems to be some cack-handed attempt to big up the NSW right at the expense of the smooth Whitlam.

Possibly this is some very distant part of the slow push to return Bill Shorten to the leadership (oh yes, they are). What it really reveals is not only how tenuous Yoda’s real connection to Labor is but how lax The Australian’s standards are.

It’ll publish any old crap. (Which explains everything else it’s been publishing about the Dismissal). This is the national broadsheet. It’s true decadence, our banana viceroyalty. 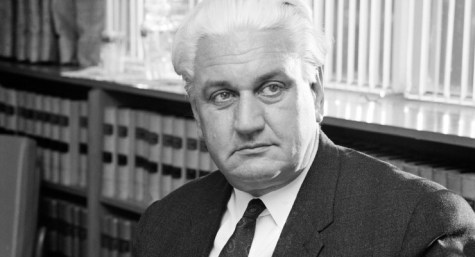 ‘Our trust was betrayed’: John Menadue, Whitlam’s top bureaucrat, calls out the palace

I know Richardson has been crook, but this error was egregious in the extreme. Richardson has always had it in for Gough because the Leader never had any time for him – Richardson’s flattering introduction to the “story” is just cover – and Richardson has long wanted to get back in Keating’s good books (of which there is no chance).

Richardson is a crook, you mean.

I remember there were a few eyebrows raised about Whitlam’s lunch at the time. “The condemned man ate a hearty meal” he quipped, which sounded a little off-hand. But as GR (Rundle, not Richo) points out, it was of no significance. Interesting to be reminded again of the precise loci of Kerr’s abuse of his powers (or “powers”).

As for Richardson, once upon a time he had a sharp brain – probably up to and including when he used to comment on election night with Kroger on commercial TV. Too much lunch since, I’d guess.

On “the slow push to return Bill Shorten to the leadership”: say it ain’t so, please. It’s over Bill. Accept it, even if your boosters can’t.

Maybe, Shorten sees Howard as the precedent for this sort of comeback? Would this mean that Labor has to have its version of Alexander Downer as leader in the interim?

Guy, you gave a stunning account of the circumstances surrounding the dismissal to Philip Adams on Late Night Live last month. The information you provided there – and more that you have available, I’m sure – should be out there in public, plain a clear and readily available for all time to refute the self-serving and ignorant accounts that just keep coming, building on each other.

Got the link for that?

Sure:
https://www.abc.net.au/radionational/programs/latenightlive/guy-rundle_john-kerr/12505310
It should be bottled.

It’s what they’re paid for, surely.
Is Richo doing any differently to any of Rupert’s other Muppets – rewriting history?

A liberal party rat is usually a person whose conscience has been awakened but a Labor rat is a loathsome creature whose fake morals and integrity has suddenly been exposed to the world, Richo is a labor rat, out of the same nest as mark latham, they don`t come any more loathsome than this pair of vile rodents

Very valid points Braddy, but you should point out that an awakening of conscience is physically impossible for most Liberals.
Agree wholeheartedly on Richo and Latham, slimy characters indeed.