AMP has reaffirmed its status as Australia's number one board coup company, and it's likely that more heads will roll.

The board coup at AMP over the weekend was the right outcome and the share market agrees, with the company’s shares recovering in a falling market this morning.

The move reaffirms AMP’s status as Australia’s number one board coup company in the past 25 years with old-fashioned chairman David Murray, 71, out with immediate effect after a controversial two-year-and-three-month stint as the nominated chair.

He will be succeeded by Debra Hazelton, a career banker with more than 30 years of experience with the likes of Commonwealth Bank (CBA) and Japanese bank Mizuho. She only joined the AMP Capital board in June 2018 and the main AMP board in June 2019.

Hazelton is one of just two female directors on the current eight-person board where the longest-serving director is columnist Janet Albrechtsen’s former husband John O’Sullivan. He was Murray’s first appointment, having joined the board in June 2018 following the royal commission-driven clean out.

Signs that today’s announcement is a coup, include the accompanying resignation of Tony Abbott’s former Treasury secretary John Fraser:

He appears to have departed in protest against Murray’s removal, a bit like the way James Packer quit the Qantas board when Margaret Jackson departed as chair in 2007.

Fraser was in the gun for promoting alleged sexual harasser Boe Pahari to chief executive of AMP Capital, the company’s most important and successful division.

Fraser had also been a target of The Australian Financial Review’s Rear Window columnist Myriam Robin (and former Crikey media writer) for his old-fashioned views on gender, so his departure was clearly warranted if the company was going to project itself as being a modern outfit up for cultural reform from the top, led by a new female chair.

The coup means AMP is down to just five non-executive directors, along with CEO Francesco De Ferrari who presumably didn’t vote on the change of chair, although he was legally entitled to do so.

AMP’s constitution requires between three and 16 directors, so there is plenty of headroom to appoint at least two but preferably three new female directors to reach the all-important majority of female directors which AMP needs to convince the world it is serious about gender equality.

The other key part of today’s announcement was Pahari’s demotion back to his old position running AMP Capital’s infrastructure equity business, with De Ferrari, his boss, stepping in as acting CEO of AMP Capital.

This is the right call in the circumstances, particularly given Pahari has been the single-most important rainmaker inside the booming AMP Capital business which has $192 billion in funds under management.

The funds management industry is particularly vulnerable to key person departures and AMP Capital reportedly has some mandates with clauses that trigger an exit if Pahari departs the company.

There have also been reports that Pahari would receive a whopping payout if he departed based on the value he has created for the company during his 10-plus years building the business.

Originally educated at both UNSW and Sydney University, Pahari was appointed global head and managing partner of AMP Capital in March 2010.

Over the past decade, whilst billions has been lost in life insurance and from dodgy financial planning advice, AMP Capital has been the only part of the business that has performed well, so he is the key man at the struggling company, from a shareholder value point of view.

That doesn’t mean he shouldn’t be let go in the next year or two for appalling indiscretions and power abuse, but it does explain why AMP’s board felt it couldn’t just sack him after all the publicity triggered by his appointment.

However, the decision by his alleged victim Julia Szlakowsk to hire Maurice Blackburn’s ferocious partner Josh Bornstein and the New York law firm which acted for some of the victims of former Fox News boss Roger Ailes has made his position untenable in the longer term.

As for what happens now, the report into Szlakowski’s complaint should be supplied to her lawyers and then, as the complainant, she should be able to determine any redactions before it is publicly released.

De Ferrari isn’t out of the woods yet either as he was responsible for Pahari’s appointment as AMP Capital CEO, as well as recruiting his old Credit Suisse colleague Alex Wade to run the company’s Australian advice business.

Wade was fired after less than a year into the job, reportedly after sending lewd photos to at least one female AMP employee. The announcement of Wade’s sudden departure explained none of this and lacked transparency, reflective of Murray’s minimalist approach to disclosure dating back to his days running CBA and the Future Fund.

Hazelton has a big job in front of her but it will hopefully involve the departure of both De Ferrari and Pahari before the next annual general meeting in May 2021.

AMP could do worse that simply selling its AMP Capital funds management business with Macquarie Group as the obvious buyer, particularly given their shared interest in infrastructure funds management.

This might already be under negotiation, particularly given the extraordinary decision of Macquarie’s female CEO Shemara Wikramanayake to reportedly (per Rear Window again) have lunch in a restaurant (Balcon) with the toxic Pahari and another colleague in Sydney last Thursday.

The negative publicity Pahari has received over the past two months has been like no one else in corporate Australia, with the possible exception of former Seven West Media CEO Tim Worner.

Normally based in London, the lad has found himself stuck in Sydney for the past few months courtesy of the ban on international travel. It must have been excruciating to not be able to disappear back to London to escape the maelstrom.

It is ironic in the extreme that Pahari, a person of colour, remains on the payroll, whilst two of the powerful old white blokes who backed him have lost their jobs. This is not how these things usually go. 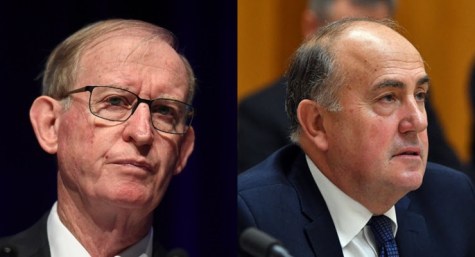 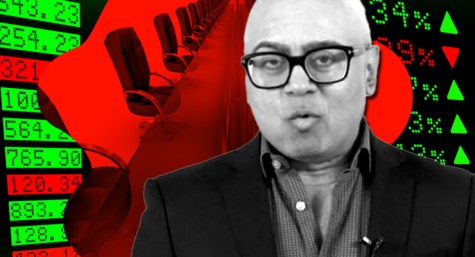 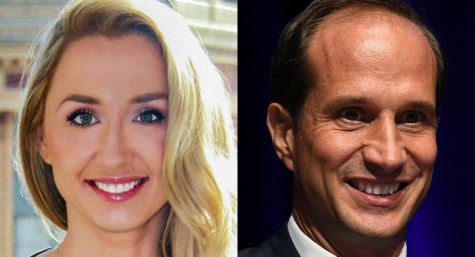 I’m surprised AMP still exists as a company. Who, after the revelations of the royal commission and subsequent dodgy behaviour, would want to have money with them?

I find it hard to credit any company, concerned for its well-being or reputation, appointing as chairman as person with a demonstrated history of being unable to distinguish fact from fantasy, and a refusal to listen to experts.

As noted by KelS, why would anyone touch AMP with the proverbial barge pole?
Unless they preferred profit to principle, which could not possibly be true in a decent, caring society … oh, umm.

With a Chairman like David Murray, I am not surprised with this. When he was made CEO of the Commonwealth Bank, the focus quickly went from service to clients to ripping them off and getting what you could out of them.

Murray was one of the architects of the Banking and financial institution culture we have today.

Stephen, you are a great explainer of the grubby machinations of the corporate financial world (which is not my world but I know I need to know about their evil ways, so thanks).