Steve Bannon is just one of more than half a dozen of Trump's associates to face criminal charges.

Donald Trump’s administration has been like a mafia movie that jumped straight to the final act — the good times end, everyone gets caught and everyone starts ratting on one another.

Overnight, Trump’s former campaign adviser Steve Bannon was arrested and charged with defrauding Trump supporters. He was allegedly funnelling funds from the “We Build the Wall” campaign for personal use.

This brings the number of Trump associates and employees — people who worked either for his campaign, his administration, or advised Trump personally — who have faced criminal charges to more than half a dozen.

Let’s go back through this true rogue’s gallery:

Lewandowski’s record shows just how much the Trump presidency has degraded our expectations. While it has since been dwarfed by the general atmosphere of “light treason” that surrounds the administration, it was kind of a big deal at the time. In March 2016 — the before time, the way, way back — he was arrested on misdemeanour battery charges after he grabbed Breitbart News reporter Michelle Fields’ arm after a speech at a Trump property in Florida, after which he and Trump lied about Lewandowski having touched her at all.

Incidentally, there’s probably a French or German word for how shocking and at the same time completely predictable the fact was that Breitbart initially backed the president over its own reporter. While video from the incident showed that Fields’ allegations were essentially accurate, the charges against Lewandowski were eventually dropped.

Trump’s first national security adviser, Michael Flynn, was arrested in 2017, charged with misleading investigators about conversations he had had with the Russian ambassador during Trump’s transition into the Oval Office.

The Justice Department has since attempted drop the case, despite Flynn twice pleading guilty, spurring an ongoing legal fight.

Michael Cohen, Trump’s longtime attorney, has a real “first guy to get whacked in Good Fellas” vibe, which possibly explains why he copped a plea deal so enthusiastically.

In August 2018, he pleaded guilty to eight criminal charges, including two campaign finance charges stemming from paying hush money — directed by “an unnamed candidate” (who is 100% Trump) — to two women, Stormy Daniels and Karen McDougal, who Trump allegedly had affairs with.

Almost exactly three years after the Lewandowski incident, Paul Manafort, Trump’s second campaign leader, was sentenced to more than seven years in prison after being convicted of an array of charges: witness tampering in the ongoing Robert Mueller investigation into Russian influence on the Trump campaign, as well as bank and tax fraud and conspiracy against the United States.

Like Manafort, he faced similar charges concerning financial crimes and conspiracy. Like Cohen, he turned on his former colleagues, testifying against Manafort and Roger Stone. Indeed, he was one of the witnesses Manafort pressured not to testify.

Having done “much to merit leniency“, including pleading guilty, Gates was sentenced to 45 days in jail and a 20,000 fine late last year.

Longtime Trump adviser and giant Richard Nixon tatt-haver Roger Stone was sentenced to more than three years prison in February after being convicted on seven counts of witness tampering and lying to investigators.

Trump — who was in regular contact with Stone during his campaign, according to both Mueller and Senate reports — duly commuted Stone’s sentence in July, though earlier this week Stone dropped his challenge to the original criminal conviction.

Further, there’s the criminal extended family of the Trump administration, whose convictions and guilty pleas have breezed by barely noticed, like the screenwriters in an Oscars in memorium montage:

And of course, George Papadopoulos, who apart from doing time for lying to investigators, will go down in history as the man who recast ultimate tory monarchist Alexander Downer as a raving leftie. 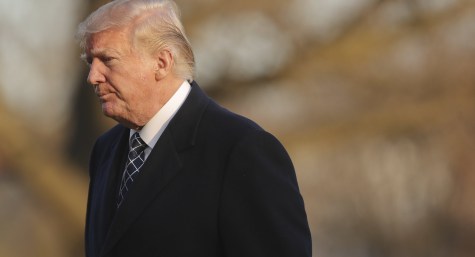 Hopefully trump himself once he leaves office, seems to have done the same as Steve bannon at every turn.

Defrauding MAGA cap wearers is kind of like shooting fish in a barrel ;). That said, what poor luck the Mango Mussolini seems to have-such an “honest” man who has somehow managed to surround himself with a bunch of crooks!

Before he reverted to his norm -“Trump lied about Lewandowski having touched her at all” – he had, as justification of Lewandowski’s action, claimed that “the reporter could have had a pen bomb!”.