Jim Chalmers says two-thirds of the debt in the budget was borrowed before the start of the pandemic. Is he correct?

Shadow treasurer Jim Chalmers said the government must not be allowed to 'pull a swiftie' by pretending the country's debt is all due to the pandemic.

Both the Coalition and Labor have in the past argued that paying off Commonwealth debt is a benchmark of economic success in Australian politics.

But Treasurer Josh Frydenberg recently warned Australians that his July budget update was going to contain “eye watering numbers around debt and deficit”, saying: “The coronavirus has required the government to spend unprecedented amounts of money to support people in need”.

The following day, in an interview with ABC News Breakfast, shadow treasurer Jim Chalmers said the government must not be allowed to “pull a swiftie” by pretending the red ink in the budget was a consequence of the virus when the vast majority of the debt had piled up beforehand.

“Something like two-thirds of the debt in the budget was borrowed by the government before this outbreak of COVID-19,” Chalmers said.

What do the records show? RMIT ABC Fact Check investigates.

When the Coalition came to power in September 2013, gross debt stood at about $280.3 billion.

That level of debt was largely the consequence of borrowing undertaken by the former Labor government to help cushion Australia from the global financial crisis, which according to the Reserve Bank began around mid-2007.

By the end of January 2020, as Australia began to record its first cases of coronavirus, gross debt was $568.1 billion.

The increase in gross debt since the pandemic hit Australia — $155.3 billion — represents 35% of the $443.1 billion of debt borrowed by the Coalition since it came to office.

This is consistent with Chalmers’s claim that something like two-thirds of the debt was borrowed by the government before the outbreak of COVID-19.

Although the net figures provide a better indication of a country’s financial position, in terms of assessing Chalmers’s claim, these figures are of less use as they only extend until the end of May, leaving out more than one-and-a-half months’ worth of borrowing.

Bearing this in mind, the net debt figures indicate that an even smaller proportion of borrowing — about 11.6% — was undertaken after the start of the pandemic.

The government borrows on global financial markets to cover cash shortfalls when its annual tax take is not big enough to meet spending obligations.

The vast bulk of government borrowing is undertaken by the Australian Office of Financial Management (AOFM). It does this by issuing government bonds called Australian Government Securities.

As the AOFM explains on its website, investors pay money for these bonds, which is how the borrowing takes place.

In return, investors get regular interest payments as well as the repayment of the principal amount at a fixed date in the future.

The AOFM keeps a daily tally of the “face value” of Australian Government Securities on issue, measuring the amount of money the government will pay back to investors when the bonds mature, independent of fluctuations in market prices.

Public debt can be measured in gross or net terms.

Gross debt represents the total amount of money owed by the government.

Net debt is often considered a better indicator of a government’s capacity to handle its borrowing.

Net debt figures, which include financial assets managed by the AOFM and by the Future Fund, set up in 2006 to manage the Commonwealth’s superannuation liabilities, are issued monthly by the Department of Finance.

Stephen Bartos, a former senior official from the Department of Finance who is now a visiting fellow at the Australian National Univertsity’s Crawford School of Public Policy, said it was acceptable to rely on gross debt.

“In most discussions internationally about countries’ government debt levels, the figure commonly referred to is gross debt,” Bartos told Fact Check in an email.

“Gross debt and net debt will trend pretty much together for the foreseeable future — gross and net debt rising and falling in parallel. Either way, they are both at post-WWII highs.”

Even if a government has no net debt, it may still have some gross debt.

This is the situation Australia enjoyed before the global financial crisis, which according to the Reserve Bank began in mid-2007.

As Bartos explains: “In cases where a government has no net debt — the fortunate position Australia was in before the GFC — it may still want to be a borrower and a lender at the same time in order to keep a government bond market going (so there is always some debt being traded in the market). That’s because financial institutions like banks like there to be an official interest rate to refer to in pricing their own lending.”

Chalmers referred to “debt in the budget”. He made the claim on the morning of July 23, just hours before the government released its budget update.

Fact Check will assess the claim on the basis that he was using the phrase “in the budget” in the broader sense, referring to the government’s financial position, rather than specifically the latest budget papers, which had not yet been released when he made the claim.

Chalmers also refers to the debt levels “before the outbreak of COVID-19”.

Australia announced its first recorded case of the virus on January 25, 2020.

At the time Chalmers made his claim, the latest net debt figures available were for the end of May, missing one and a half months of borrowing during the crisis.

Fact Check has consequently primarily used the end-of-month gross debt figures and the latest daily figures to assess the claim.

What the figures show

When the Coalition came to power in September 2013, Australia’s gross debt was $280.3 billion. This was largely the consequence of borrowing (and budget deficits) notched up as the former Labor government responded to the global financial crisis, which according to the Reserve Bank started in about mid-2007.

As the following graph shows, Australia’s gross debt has been rising since the onset of the global financial crisis.

The rise in the gross debt represents the cumulative consequence of successive annual budget deficits, apart from any borrowing undertaken to maintain the government bond market.

By the time the coronavirus pandemic struck Australia, towards the end January 2020, gross debt had risen to $568.1 billion, an increase of $287.8 billion since the Coalition took office.

Mhalmers made his claim on the morning of July 23. The AOFM told Fact Check that at the close of business the previous day, July 22, the total face value Australian Government Securities (gross debt) on issue was $723.4 billion, an increase of $155.3 billion since the start of the pandemic.

This represents 35% of the total increase ($443.1 billion) since the Coalition came to power.

The remaining 65% of the debt was borrowed before the start of the pandemic.

This is consistent with Chalmers’s claim that “something like two-thirds of the debt in the budget was borrowed by the government before this outbreak of COVID-19”.

If the $280.3 billion of debt accumulated by Labor before the Coalition came to office is included in the equation, pre-crisis debt accounts for an even bigger proportion, equivalent to 79% of the total.

What about the net debt figures?

As noted, net debt figures are often seen as a better indicator of a government’s ability to handle its liabilities because offsetting financial assets are factored into the equation.

Monthly net debt figures are published by the Department of Finance. However, as noted, the latest data available at the time Chalmers made his claim was for May 2020, making the information somewhat out of date as a tool for assessing his claim.

At the end of September 2013, shortly after the Coalition came to power, net debt stood at $174.6 billion.

That suggests that Coalition borrowing undertaken after the onset of the pandemic accounted for just 11.6% of the total increase in net debt under the Coalition, compared with 88.4% before the pandemic.

Head of Investment Strategy and Chief Economist at AMP Capital, Shane Oliver, said he was not surprised that most of the debt had been notched up before the start of the pandemic as the budget had been in deficit for many years.

Dr Oliver pointed out that the Coalition had tried to get spending under control, although many of its measures were blocked in the Senate.

“They had to rely on a slower path of revenue growth. Basically at the time of the global financial crisis spending ramped up but stayed at that higher level well into the 2000s.”

Dr Oliver said Australia’s gross and net levels of debt, expressed as a proportion of the economy, were still low by international standards. He said the pandemic had created an extraordinary set of circumstances and the spending and borrowing was certainly the right thing to do, particularly with interest rates at historically-low levels.

Bartos said it was hard to see interest rates rising any time soon.

“If debt is incurred for a good purpose (and suppressing or eliminating COVID-19 obviously qualifies, as did being on the winning side in WWII) then governments should take on debt,” Bartos said.

“However in the long run the debt has to be repaid.”

However, Bartos said he disagreed with the notion that the debt could be repaid by printing money, as has been suggested.

“It will be done the old fashioned way, by the economy recovering, which over time will lead to tax receipts rising and government welfare payments falling. It will however take a very long time.” 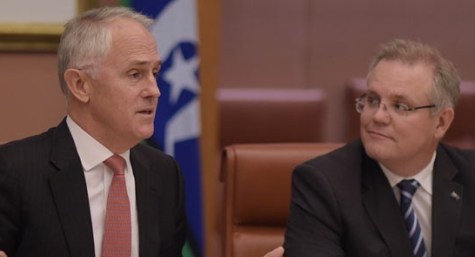 Steve Keen: The myth of deregulated finance is dead

WOW!! Fancy the Labor Shadow Treasurer being CORRECT about something!
Of course, his statement had to be fact-checked, because he couldn’t possibly be right about anything…could he????
Keep on keeping on, Dr Jim Chalmers…even though you’re not supposed to know anything about anything, some of us think you are right most of the time!!

The graph does not go down to zero on the Y-axis. Because it is so easy to assume that a graph honestly goes to zero when it does not, we should presume that the author intends to mislead – until proven otherwise. All histograms should show full length down to zero, a required fact that “Fact Check” should routinely check.

I don’t think that that is a mistake. Costello is reputed to have reduced australia’s debt to zero, but I think it actually wasn’t, the difference is the use of language between net debt and gross debt.