In a few short months, a company set up by a former Crosby Textor pollster has gone from being the new kid on the block to receiving more than $1 million in limited tender contracts.

In the space of just a few months, a company set up by a former Crosby Textor pollster has gone from being the new kid on the block to receiving more than $1 million in limited tender government contracts, even landing a position on the government’s coveted go-to panel for urgent work.

Jim Reed, a long-time researcher with Crosby Textor, now known as C|T, was revealed in June to be the recipient of a $541,000 limited tender contract from the Department of the Prime Minister and Cabinet (PM&C) to conduct social policy market research.

Now, his company, Resolve Strategic, has been handed another $502,000 limited tender contract by the Department of Treasury, again for market research.

There are no details on the government’s tender registry about what kind of market research he has been hired to do, or why it wasn’t put out to open tender. Treasury didn’t respond to questions from Crikey about the contract before deadline.

“We’re seeing over and over again mates of the government being rewarded with big contracts,” Labor Senator Murray Watt told Crikey.

“Their work is highly secretive and there is a genuine question as to why the Treasury Department is conducting market research in the first place. These are departments that are supposed to be dealing with facts, not public opinion.”

Reed set up Resolve last year after working as a senior director of corporate spin outfit Newgate Communications and a researcher and strategist for Crosby Textor. Resolve claims to use “high quality research” to formulate campaign strategy and communications.

“This is about thinking of everything as a campaign, whether that’s one to win votes, to buy your products … or to endorse your social licence,” he has told Mumbrella.

Reed is not the only C|T alumnus to have a prominent role in the government’s current messaging. Prime Minister Scott Morrison’s principal private secretary, Yaron Finkelstein, is the former chief executive of C|T, where he worked with Reed for several years.

The contract was the subject of scrutiny at a Senate committee hearing in June, where Watt quizzed NCC deputy chief executive Malcolm Thompson about why it had selected Reed’s company.

Thompson said Resolve had been selected because it was on a panel that the government accessed when it required an urgent contract.

Labor Senator Katy Gallagher, chair of the COVID-19 select committee, has said “important questions” about the NCC’s contracts with Liberal Party connections needed to be answered.

It follows revelations the NCC had handed another $42,000 communications contract to Commtract, a firm headed by two former Liberal Party staffers, Luke Achterstraat and Peter McConnell.

Reed did not return Crikey’s calls. The COVID-19 commission is yet to answer several questions on notice from the Senate hearing, including other questions about the Reed contract. 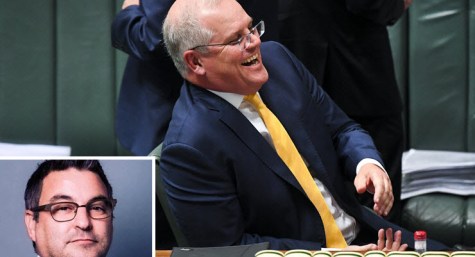 Has the National COVID Commission answered a single question about anything? And exactly what has it achieved to date spending taxpayer money? A leaked report that fossil fuel producers and distributors would be the beneficiaries of a government-led recovery, that was retracted, not denied. That’s it as far as I am aware. The NCC is a joke at our expense!

That awful smell is back…again..!!
Crosby Textor have a great track record as democracy vandals – just like the IPA.
I wonder why the LNP and Tories in the UK like them so much?

Crosby Textor, the IPA, and the LNP are all wholly owned subsidiaries of NewsCorp

It’s the same US imported radical right libertarian architecture of influence developed and/or mediated by Koch Networks (their global Atlas Network includes both IEA and IPA….) with similar policies, dog whistling of minorities including unions and sales system including GOP trained pollsters/corporate lobbyists masquerading as think tanks, direct lobbying of MPs, leveraging journalists and being promoted by mainstream media for free…..

Still surprised nobody has done a documentary about the the roots of Crosby Textor (via west coast US GOP pollsters), how they operate and their influence in Australian and UK politics.

Has Senator Watt not realsed this is the only working iteration of track and trace? Track any government contract and you’ll be able to trace it back to one of their mates.

(And regreattably this is not one of mine, it was a meme I saw on an anti Brexit page recently)

Unfortunately I don’t think that the National Covid Commission is a joke, it is probably as close to a Grimm’s fairy tale as is possible without there being a moral to the story at all.

How did we come to this situation whereby the federal Government appears to be answerable to no one regarding any of its spending/ rorts/ quasi Infrastructure spends?

The same government run by someone who thought it appropriate to go on holiday in Hawaii, without delegating his authority to the deputy prime minister.
Meanwhile the RFS was battling up at Wiseman’s ferry to prevent the bushfires making it all the way to the harbour as they had in 1994.
The bushfire smoke was acknowledged to have caused the death of about 400 people in Sydney.

The seemingly endless amounts of our tax money it is willing and able to fritter away or re-locate into unaccountable NGO’s such as the Reef Conservation organization, staff of 9, $400,000,000 and no action so far to date.

The Murray Darling Basin Authority paying $80,000,000 for floodwater that should flow across two properties on the Darling and yet, no one put a plane or even a drone up to check that the levee banks had been dismantled.

And so the unaccountable National Covid Commission was made even more unaccountable because all of its advice is now within the Prime Minister’s department and protected by cabinet.

Why would a Prime Minister not want the public to have a clear line of sight and understanding regarding the advice sought and provided by executives of companies such as Fortescue Metals and Aramco (Saudi’s oil company).

Why would he not want us to have a clear understanding of any conflicts of interest that these hand picked advisors may have, if, as he attempts to explain that he is taking advice on how to best position Australia when the post Covid economy begins to stir?

Why would a “drop” as they call it, or, a kite flying exercise to ascertain how strongly or not the population feels about the use of our money to build a gas pipeline at least 2/3rds of the width of NSW so that Santos can frack 850 gas wells in the Pilligar forest near Narrabri?

Singularly the most expensive gas project probably on the earth. The sales pitch being “transitional energy source” from coal to renewables and, the most fatuous “Clean energy”.

As if liberating Methane from where it is trapped within the earth by fracturing water aquifers deep below the surface, so that some of it is captured and able to be piped away and the rest find its way to the surface with water. Yes, it is true that you can set the water in the Condamine River on fire and yes the bore water in south western Queensland is also flammable.

The marketing people found that the “fracking business” was not popular and the “transitional energy” called gas also got a thumbs down.

The Prime Minimal, carefully wiping his hands, said “It would be up to the NSW government to approve the project or not”.

For a man who brought a carefully lacquered piece of coal into the parliament and handed it around, one can say that if what you have in your hand is a hammer, everything looks a lot like a nail.

A clear warning to Scottie from marketing, the Australian people will give you a fair go, but, if they get the sense that they are being taken advantage of or are being misled or that somehow the government has forgotten who they are really answerable to as far as enabling a fair system for the disadvantaged, well ask John Howard about Workchoices.

A million dollar contract for market research or two is probably not really necessary.

Are any of the companies that receive these contracts also major donors to the LNP?

It’s the LNP’s idea of a recycling.

All I would think.
Kate Carnell has been awarding money to lnp mates without tender too. These are about two dollars less than allowed, and separate awards to the same companies to achieve the same aim. Since when does an ombudsman get to hand out govt money, or do I mean lnp money?

Agree, bj! The whole stinking mess should be examined by the Labor Party through the Senate committee at the very least.
Seems the L/NP are using ‘our’ money for their own campaign purposes…so much for democracy with this corrupt lot running the show!!

Of course “Labor” wouldn’t do the same thing… would they Roy?