Is it time for Aussie home buyers to go west?

Perth now has some of the cheapest property in Australia. Is 2020 the year to make the move?

Sometimes you need to buy the dip. That’s the lesson of markets. Stock markets have proven it recently. But Australian property has given us few opportunities to put the idea into practice, eschewing dips for regular fresh highs.

That is except for one place: Perth’s housing is well below its peak, and that peak was a long time ago.

This graph shows the story since the peak, but Perth’s weakness goes even further back. The median property price in Perth has failed to keep up, ever since the mining boom began to ebb.

As the next graph shows, the West Australian capital very nearly had the most expensive median property in Australia in 2007. Then it slid. First Sydney pulled away. Then in 2013 median prices peaked and began what would be a long fall. As Perth slid, Melbourne overtook it. Then Brisbane. Recently Hobart raised its head in a huge surge that completely reordered the property pecking order.

Now Perth has some of the cheapest property in Australia. According to March 2020 preliminary data, Perth’s median house price of $477,000 is only barely ahead of Adelaide at $469,000. Adelaide!

This has to raise questions. If you’re going to pull the trigger on an Australian property purchase, should it be in Perth? Australia overall looks expensive. But is Perth… cheap?

To answer that, consider this: iron ore prices are above $100 a tonne, double their lows of a few years ago. In the March quarter WA’s economy grew 0.9% as the national economy shrank. The state has very few coronavirus cases, fans can actually attend the football there, and the weather is usually disgustingly beautiful.

Yes, the economy is highly exposed to mining, but money goes a lot further in the Perth property market.

Let’s look at the difference

The median apartment price in Sydney is $710,000 and, in the Sydney CBD, it buys you this: a dark one-bedroom apartment with views of another building.

In Perth’s CBD, for the same money, you get this: a two-bedroom two-bathroom apartment with water views. Big ones.

There are not huge differences in quality of life between Australian cities. We’re all pretty happy. But Perth’s property is a lot cheaper.

Trying to buy a house in Sydney for Perth’s median house price of $477,00? You might find one. But if you head to the open for inspection by public transport, you should pack lunch.

Of course, 2020 may not be the time to buy property at all. Fear could grip the Australian property market later in the year. But if it does, surely Perth — with all the froth already blown off it — is insulated from the kind of big falls we could see in the eastern states. 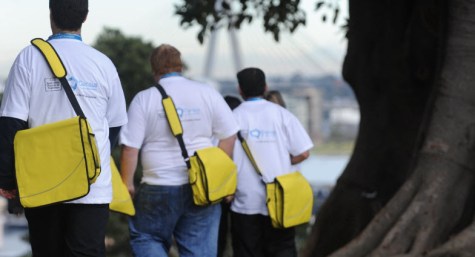 Housing unaffordability not as severe as some have suggested

Why do you need to put down Adelaide? As an Adelaidean I’m getting a bit sick of it.

I have to agree Jethro. I’m not from Adelaide but have spent a few months there and it’s a delightful city. This article also makes no mention of Perth having the country’s worst unemployment rate. And a $477,000 house might seem cheap to someone living in Melbourne or Sydney, but for anyone on the average (and falling) Australian wage, it’s still an expensive purchase.

Its a national pastime Jethro!

But Sammy J was much meaner about Melbournians last Thursday so take heart!

Perth ..umm.. drinking water?
If one were really serious about value for money in housing, go regional, anywhere.
Those dumb enough to live in the megapolises are beyond reason.

Too right Dounreay. Even Wollongong and Newcastle would be so much better value. Both are great cities if you pick your spot.