White dot fever: cleaning up spectrum kills off Channel 31 for no good reason

It's time to rally once again in support of community television.

Your correspondent has a vague memory of television actually going off. When TVs were cathode ray tubes, and the ABC would stop broadcasting at… what was it? 1am? 8.45pm? And the screen would just fade to a white dot before rebooting with a test pattern.

Glory days. You could go to the flickers for a shilling, and cough mixture was mostly heroin. Been a long time, but here we go again.

Today is the last day to save Channel 31, Melbourne’s community TV station, the last (together with C44 in Adelaide) of the national network established in the ’80s, following the model of community radio in the ’70s.

For years, Coalition governments have been trying to kill C31; it most recently got a very last-minute reprieve after the Turnbull government came gunning for it.

We all trotted out the arguments then, and let’s trot ’em out again.

For decades, C31 has served as a focus for people who just want to make television. They want to make shows about growing orchids, about the heavy metal scene, about regional footy leagues, they want to have a crack at daggy tonight shows, and so on and so on. 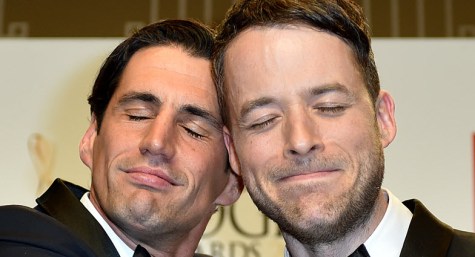 In the process, the station has probably developed more talent than the lazy dimwits who run the commercial channels, from Waleed Aly through Hamish and Andy to Rove, and many less famous.

It has trained literally hundreds of techs who’ve gone on to do pro work. The archives of its sub-groups such as SKATV (St Kilda TV) are a compendium of life as it was lived in this city over four decades.

And it’s just been… there, for anyone willing to do some volunteer work, then put up their hand and say “I’d like to have a go”.

Management wants to keep going. People keep turning up. Small but various audiences keep tuning in. Why not keep extending its license for as long as people want to do it? God knows.

The free-to-air spectrum we currently have is “digital compressed”, doesn’t allow infinite channels. But the commercial stations can’t fill the ones they’ve got, piling up repeats of decades-old shows and paid presentations, just to hold onto the digital real estate.

One hears from inside both government and public service that there is an obsession with “cleaning up the spectrum” and an animus for community TV not directed at community radio — bizarre, since C31 is pretty apolitical (did they not enjoy Blokesworld?) while radio like 3CR was a left organising command centre for decades, shhhhhhh.

Once again, I ask what I asked last time: do pro-market people believe there should be no third sector, beyond private and state, where people can just connect together, at a situation approaching zero cost to the state?

That is the market not as a force for freedom, but as a totalitarian element. Sure, tech change means social change. The “community” model based around channelled media will shift. But while it’s still there, it serves as a focus, a collecting point; it inspires people to make something bigger than themselves, to create traditions that last beyond them, and draw new people in.

Can we not be a bit Burkean liberal-conservative about this, and say that it works, it has been handed to us, and should be passed on, sparing the scythe of abstract reason, and the fetish of “cleaning up the spectrum”?

Minister, give C31 a license extension, and see what we see. Once more into the breach. The white dot is coming for a lot more than community TV, and we are going to regret all that we’re switching off in the years to come.

Community TV is on its death bed, when will Conroy step in?

Community television shafted by the government

Well, you’re dealing with my fed member Fletcher and from what I know about the dimwit, he wouldn’t understand what spectrum is!

Based on his dreadful showing on Insiders yesterday, as well as his refusal to share with his National colleagues the ABC’s offer to increase rural coverage and his membership of the IPA, I’d say Fletcher thinks a spectrum is the instrument used by surgeons when conducting colonoscopies.

In an era of unlimited global communication we find ourselves with less local services, those that encourage a sense of community eg: volunteer TV & small independent newspapers. How is new media talent to be recognised & fostered?

An alert notification regularly appears on the TV screen about a new channel &, once I reluctantly investigate, it’s inevitably commercial dreck heavy with home shopping & reruns of reruns of reruns. Much of the piffle programming should never have had an original run.

Ah yes, Guy, the white dot. Even in the 1980s ABC TV was still regularly closed down at approximately midnight with a pre-recorded goodnight announcement.

I recall the ABC closing down showing a short clip of a bushman tending his small campfire, accompanied by the Shadows playing “Wonderful Land”.

As a child, I used to enjoy the Ch7 shutdown – so reassuring seeing the joey put to bed by caring mummy roo.

Who remembers Neil on The Young Ones about the white dot “It means something really heavy. There’s no more telly. Time to go to bed.”

Well said Guy. Community TV is a bargain for the immediate and broader benefits it provides. Its hardly a hotbed of radicalism either. The real worry is the Canberra bubbleheads will come for community radio after this. In Melbourne CR, RRR and PBS are popular institutions and with mostly high quality programs not covered at all by the execrable hell of commercial radio or the ABC.

Despite the pretence the electromagnetic spectrum from AM to gamma rays is a natural occurrence completely unsuited to privatisation or monopolisation.

I can’t be certain as I avoid them like the plague but I imagine that pro-market people believe there should only be one sector; the Private sector.
Community TV gives people the chance to watch something other than Eddie Maguire and Kochie…and we can’t have that ,oh no,no,no.

Yeah, but don’t the pollies want to do something important with the spectrum, like selling it to the racing industry or betting companies or the like?

Master Of Coin
Reply to  Graeski

That’s the really weird bit Graeski. There’s precisely zero use for the minute amount of freed up spectrum until the next iteration of TV standards upgrades, which is years away.

Dounreay
Reply to  Master Of Coin

Thanks for that bit of techy info – I was not aware of the width.