Casualisation — not just a union-business debate, but maybe key to new growth

Even if overall levels of casualisation remain unchanged, addressing job insecurity might deliver a win for workers, employers and the government itself.

Despite the media love-in for Scott Morrison’s industrial relations reform “process”, some parameters and hard points have emerged that make it clearer this isn’t the peace in our time that some excitable journalists were suggesting earlier in the week.

First, the government reserves the right to ignore any outcomes, or lack thereof, from its IR workshops and try to legislate unilaterally, with Attorney-General Christian Porter flagging that the government will go ahead without any agreement from its industry-union working groups.

A Hawkeian consensus it ain’t.

Second, Morrison won’t guarantee that the reforms the government will pursue won’t disadvantage workers. Indeed, merely to ask about that, as Sabra Lane did yesterday, is to invite criticism by the prime minister.

So, yes, “get past” this fixation with reforms that immiserate workers. Stop asking questions. And forget the better off overall test, we won’t even get a “no disadvantage” test at this rate.

That clears the way for the government to attempt to portray itself as an honest broker between employers and unions and, when the two sides can’t agree on anything, produce its own shopping list of reforms that just so happen to make some workers worse off, but all in the name of a more productive and flexible workplace. And, hey, at least they have a job, right?

But Morrison has flagged that a “key issue” would be casualisation.

“The opportunity should be there for [employees], where they’re effectively operating as full time employees, that they would have the opportunity convert to full time work,” he told Lane. “Now, that’s a reasonable position.”

Now if Morrison is clever, and willing to be non-ideological, this is an issue on which he could, improbably, deliver a win-win that would provide valuable political capital.

Both sides have a point: casualisation did rise significantly in the 1980s and 1990s — but has remained at that elevated level ever since.

But a paper from the Reserve Bank in 2018 shed further light on the issue by examining not the formal level of casual employment but perceptions of job insecurity.

It found, using data from the HILDA survey, that there’d been a significant fall in perceptions of job security after 2012 right across the workforce, and it remained, at the time of the report, well below levels before and after the financial crisis.

What drove this? The actual state of the labour market, both unemployment and underemployment, were, as expected, important. And unsurprisingly “workers in casual roles report lower job security than those in non-casual roles”.

But the report found only “part of the fall in job security during the post-mining boom period can be explained by the weaker labour market”.

Other factors were also important: “trade exposure and automation have the expected significant negative relationship with perceived job security,” whereas factors “associated with higher job security include: working full time, having a permanent position, having longer tenure, being female, being older, having less formal education and living outside a capital city”.

But there was also an x-factor: “Aggregate conditions not captured in our model appear to be the key driver of job security concerns. The recent decline in perceived job security has been broad based across industries, occupations, job structure and personal characteristics. As such, we cannot pinpoint any one factor that has led to the decline in perceptions of job security.”

The RBA authors argued job insecurity is a key reason for wage stagnation — workers who were more uncertain about their capacity to retain a job were less likely to seek higher pay rises.

And the link between job insecurity and lower consumer spending and higher savings rates is — apart from being common sense — established both here and overseas.

Australian retailers have been lamenting for years that Australians have been reluctant to spend, and lower household expenditure has crimped economic growth; the RBA devoted an entire section of its February Statement of Monetary Policy to weak household consumption in recent years.

What if the government took the ACTU’s arguments about casualisation seriously and undertook to enable the easier transition of casual workers, if they wanted, to full-time employment?

As the RBA study indicates, employment conditions are only part of why workers feel job insecurity.

But a lowering of the overall level of casuals in the workforce, coupled with strong employment growth (which will require more fiscal intervention) could improve perceptions of job security back to levels of 2012.

If the RBA is right, this will feed into higher wages growth, and will also lift household spending — with corresponding benefits for all Australian businesses and especially retailers.

A win for workers, a win for business and a political win for a government trying to pitch itself as above the ideological fray, even if its real agenda is to deliver for its business donors.

If Morrison is half as smart as some in the press gallery seem to think he is. 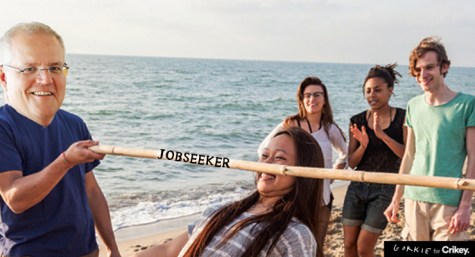 If only we had a government that was willing to listen and act on this. But we do not. It is attack the worker at every turn.
The so called “money managers” are wrecking the economy by their persistent ideologies and influence from big business, both local and overseas, who contribute little in the way of taxation to this country.

Ah, employers and their overarching concern for employees “lifestyles”?
Like “casualised” mortgages on their “casualised” homes? Losing work at the drop of an employers hat? Having to wonder whether to spend their meagre wages on rent or food? Happy forgoing unaffordable health/dental care? Relying on relatives when ends don’t meet? Going without penalty rates that made up a bit of that lifestyle shortfall? …. “The lucky bastards”?

I assume that he will guarantee that businesses won’t be worse off?

So look at the slow arc of the employment trends; in the “good old days” there was the idea of “jobs of life” there was a reciprocation between companies/employers and their workforce, we need each other so lets take care of each other. Enter the period of economic rationalism when this all ended, it became about what value do you add, intangibles aside, the “job for life” was for the few. Those who missed the job for life, moved between companies to get promotions, recognition, satisfaction and pay rises! This trend has continued to our current time when we realise that the Emperor is actually naked! There are no jobs for life and the companies actually do not want to be in Australia! That is the reason why workers do not feel secure!

I wonder what has happened to the category ‘permanent part-time’? All the benefits of full-time employment but at a reduced number of hours, agreed to by employer and employee. Costs are much the same as casual employment but commitment from both parties is greater, and employment is more secure.