The National COVID-19 Coordination Commission has been in place for two months, and now questions are being asked about how it manages the conflicts of its members.

But since then, it’s not entirely clear what the commission has actually done. Instead, it’s faced scrutiny over a lack of transparency, and apparent promotion of business interests.

Who’s on the commission?

Lots of well-connected people from the corporate sector, but very little health experience. The commissioners are:

What has the commission done so far? The “news” section on its website contains just five items, including a planning tool for businesses to work safely.

But some of its more recent public announcements might raise a few more eyebrows.

This week, the commission has been trumpeting a $6 billion trans-Australian gas pipeline. A story in today’s Australian Financial Review, quoting Power, suggests cheap gas will be a key pillar of the Morrison government’s economic recovery. It isn’t the first time Power has pointed to gas as an economic solution. He’s also promoted fertiliser and petrochemicals as industries that Australia can take advantage of.

But while Power claimed the commission was transparent about its interests, it’s clear plenty of them would benefit from a gas-driven future.

Power is on the board of Strike Energy, a gas field developer run by a close friend. One of the big projects getting early backing from Power and the commission was an ammonia plant in Narrabri, NSW, which could pave the way for a controversial Santos gas project.

Those gas ties run through the commission — for example, Catherine Tanna heads Energy Australia. But those interests are perhaps best represented by Andrew Liveris. A special adviser, Liveris wasn’t one of the initial commissioners. It’s unclear how he came on board, but it was reportedly through Power.

“Petrochemicals should be a no-brainer for this country,” Liveris said following his appointment last month.

Saudi Aramco, where Liveris is a board member, sees a hugely profitable future in natural gas production. And Dow Chemical, which he used to head, is one of the world’s leading fertiliser producers. Liveris is also on the board of Worley Parsons, an consultancy for the energy and gas industries.

It’s also worth noting what the commission hasn’t prioritised. Power has said debates about climate change could wait till after the crisis, and appeared to downplay renewable energy in his response to the crisis.

There is, however, still very little we know about the commission. Last week, the Department of Prime Minister and Cabinet told Senate estimates Power would be paid $267,345 (less than original figure of $500,000) for six months of work. That money wouldn’t be a salary, but is intended to cover costs of travel and accommodation.

Combet, Halton and Little would each be paid $108,000 for two days a week for six months.

And any process of declaring conflicts wouldn’t apply to Liveris, since he is classed as an appendage to the commission, Senate estimates heard last week. 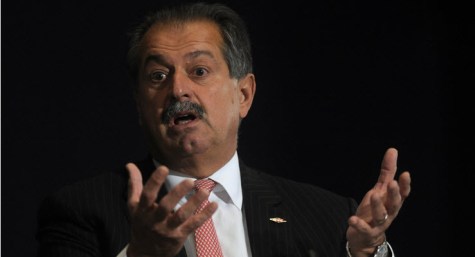 Nev Power will front senators tomorrow. Here are the 10 questions they should ask him

How would a gas pipeline from Western Australia to the eastern states reduce gas prices?

Surely it would be snapped up by gas exporters?

Why is Greg Combet referred to as an ACTU Boss? Jane Halton could be listed as a former boss of the Health department. Why are union officials always described as bosses by the media?

Jane Halton of the ‘I don’t remember’ faulty memory fame?

Or Jane Halton for her starring role in the “Children overboard” story. A picture of integrity.

“Racist liar”. Fixed it for you.

That dramatis personae is quite the rogues’ list of the usual suspects and absolutely no conflicts of interest.
Nice touch to include Combey. For…balance?

Wasn’t Greg Combey a big supporter of action on climate change? How is that going to work on this ‘commission’ of climate deniers/fossil fuel supporters?
Or has he changed his stripes to accommodate this appointment??

It happens.
Principles, as Groucho pointed out & Ma’n Fer’son demonstrated, are flexible and depend upon knowing who butters the cheque.

Why would Combet sign up to legitimise this gang’s activities?