Just who wants Hugh Marks out of the picture?

Labor has its own sub-genre of the "wife guy" meme, a hit job on Nine boss Hugh Marks, and more tips and murmurs from the Crikey bunker.

The vernacular of the highly online continues to spread into real life. One of the oddest of these is the “wife guy” — a category of bloke whose entire claim to a personality on performative husbanding. As The New York Times — oh yes, this is a phenomenon with coverage from several high-profile outlets — puts it: “The wife guy defines himself through a kind of overreaction to being married” .

Two classic examples are the “curvy wife guy”, who talks of being attracted to his wife like it made him a feminist hero, and “cliff wife guy”, who shared a video of his wife falling off a cliff (his heart is in the right place, we think?).

Joining this rogues gallery is the “campaign wife guy”. Over the weekend we got an email from Brad McBain, introducing himself thus: “My wife is Kristy McBain, Labor’s candidate for Eden Monaro”. He goes on to say we can give her the greatest Mother’s day gift of all: Donating to her campaign and increasing her social media reach.

Of course, the ALP has long courted the wife guy demographic. Remember the “Vote 1: Chloe Shorten’s Husband” T-shirt which made the electorate so ready for a change of government in 2019?

For those who missed it, yesterday’s Sunday Telegraph published a hit piece on Nine CEO Hugh Marks, which opened with the assertion that, “some members of Nine Entertainment’s board are now pushing openly for the removal of company CEO Hugh Marks”.

Not that openly, given the story names no names.

But of course, that’s not what the story is actually about; the tail of this particular comet (which takes up roughly half the piece) is a lot of wink-wink nudge-nudgery about Marks taking a “long, languid lunch” with his executive assistant Jane Routledge.

The piece does the lawyer’s slalom around actually making any allegations.

To the Tele, Marks denied anything was going on, which raises the question — what the hell business is it of ours anyway?

Today, the Oz rehashed the piece, airily speculating as to who might be behind the leak. We have a prime suspect ourselves, but it’s not in the Nine offices.

Coronavirus is a doubled edge sword for the big media players in Australia — ad revenue has of course taken a run for the nearest cliff, but news audiences are up. News Corp clearly wishes to be the last man standing at the end of all of this, but things don’t appear to be going to plan.

And as the Oz istelf reported today, “News Corp Australia is in talks with Antony Catalano’s Australian Community Media to sell its portfolio of more than 100 community and regional newspapers”.

Crikey detects a hint of desperation in the gratuitous personal hit on the CEO of News’ major competition in the country.

Trad had been holding on through allegations she interfered with the recruitment of a school principal in her electorate, but she finally quit in the teeth of “growing angst among Labor’s marginal-seat MPs across regional Queensland”, and “the withdrawal of support by United Workers Union boss and Left faction convener Gary Bullock”.

As happens when the Labor party shakes itself to dust in front of us, the faceless men become briefly visible — this time, that man is Bullock.

Five days ago, he was behind a move by QLD’s Labor left to poach back-bencher Jim Madden from the party’s right faction (of which Premier Annastacia Palaszczuk is a member), and in March he won out in a mini drama over who would run in the Bundamba byelection.

But the influence clearly goes back a while — in 2015, he named seven government members as “United Voice MPs”. Three of these were in Palaszczuk’s first cabinet.

His shift away from Trad is in keeping with his reputation of being “difficult to pin down”. As a senior Labor figure puts it in an Australian Financial Review piece from 2018 looking at Labor’s factional powerbrokers: “He picks and chooses when he uses his power”.

NOTE: This article has been updated to remove an item that incorrectly reported News Corp had done a share buyback in April. Read the full correction here. 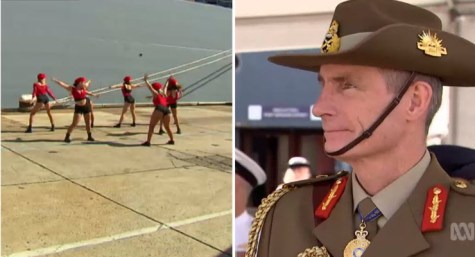 Sorry, despite the examples proffered I still cannot grasp the concept of a “wife guy” (not “wife bloke“?).
Is that like Rock Hudson having Doris Day as a beard or a lady with gal-pals having a husband as a handbag?

Bullock by name … he doesn’t have the capacity to engineer anything. Look behind to see whose pulling his strings. Bullock just does what he’s told