This coronavirus is unlike anything in our lifetime, and we have to stop comparing it to the flu

As a longtime health care reporter, I see the unfolding coronavirus pandemic as representing everything I’ve read about — from the early days of epidemiology to the staggering toll of the 1918 Spanish Flu pandemic — but had not covered in my lifetime.

And still, I have been caught off guard by the pushback from top elected officials and even some friends and acquaintances who keep comparing it to the flu.

“So last year 37,000 Americans died from the common Flu,” President Donald Trump wrote on Twitter on March 9. “It averages between 27,000 and 70,000 per year. Nothing is shut down, life & the economy go on. At this moment there are 546 confirmed cases of CoronaVirus, with 22 deaths. Think about that!”

By Friday, Trump had declared coronavirus a national emergency, freeing up resources and removing hurdles for a faster response.

In the meantime, not one public health expert I trust — not one — has said this flu comparison is valid or that we’re overdoing it. Every single one, from former FDA commissioner Scott Gottlieb to Harvard professor Ashish Jha, has said we’re not doing enough, that this is far more serious than it is being taken.

Here’s why that is:

This is far deadlier than the flu.

As Dr Anthony Fauci, director of the National Institute of Allergy and Infectious Diseases, and others have said, COVID-19 is deadlier than the flu. It’s deadlier for young adults. It’s deadlier for older adults. In China, early data shows that it was 10 times deadlier. This chart from Business Insider compares U.S. flu deaths to deaths in China from COVID-19.

Even for younger people, the difference was striking. Flu killed .02% of infected patients age 18-49. It’s 10 times that for COVID-19.

In other countries, such as South Korea, the death rate has been far lower.

Our health care system doesn’t have the capacity to deal with this.

Epidemiological experts keep talking about the need to “flatten the curve.” What they mean by that is that we need to slow the speed at which new cases are reported. We may not be able to stop the spread of the coronavirus, but we have to try to manage it. If 1,000 new cases happen over a month instead of a week, the health care system is more able to handle them.

Here’s why this is a worry: overall, our hospitals have fewer beds than other developed countries, according to recent data from the Organisation for Economic Cooperation and Development. The United States had 2.8 beds per 1,000 residents. By comparison, Germany had eight beds and China 4.3 per 1,000.

The United States looks better when it comes to intensive care beds, but there’s tremendous variation between regions and states. If we experience what parts of China and Italy saw, we won’t have anywhere for sick patients to go. We will quickly run out of capacity.

Even if we have the capacity, we may not have enough supplies.

In a crisis moment, supplies like ventilators and N95 face masks will be key. But as National Geographic and other media have reported, the United States has only a fraction of the medical supplies it needs.

“Three hundred million respirators and face masks. That’s what the United States needs as soon as possible to protect health workers against the coronavirus threat. But the nation’s emergency stockpile has less than 15% of these supplies,” the magazine reported.

Others have reported shortfalls as well, and ProPublica has been hearing from health care professionals across the country who say their own institutions are running short of supplies. (Share your story here.)

U.S. Surgeon General Jerome Adams tweeted at the end of February, “Seriously people- STOP BUYING MASKS! They are NOT effective in preventing general public from catching #Coronavirus, but if healthcare providers can’t get them to care for sick patients, it puts them and our communities at risk!”

Another challenge: hospital staff have been exposed too.

And if that weren’t enough, there’s another problem. Health care workers who have been exposed to the virus are now quarantining themselves, further reducing available staff at hospitals. Kaiser Health News reported on the effects of this:

“In Vacaville, California, alone, one case — the first documented instance of community transmission in the US — left more than 200 hospital workers under quarantine and unable to work for weeks.

“Across California, dozens more health care workers have been ordered home because of possible contagion in response to more than 80 confirmed cases as of Sunday afternoon. In Kirkland, Washington, more than a quarter of the city’s fire department was quarantined after exposure to a handful of infected patients at the Life Care Center nursing home.”

This week, Banner Health in Colorado informed employees that a co-worker is among those with the coronavirus, The Colorado Sun reported. “People who came into prolonged, close contact with the woman in a Banner Health emergency room are being notified and asked to home-quarantine for 14 days, according to a source close to the investigation who spoke to The Sun on the condition of anonymity”.

And my ProPublica colleagues reported Friday how some EMS workers are also being quarantined because of exposure. (It didn’t help, of course, that the EMS system was slow to get up to speed on the threat.)

More than that, many health care workers have children and as schools begin to close, they have to figure out how to care for their own families.

People in rural areas will have little care nearby should they be affected by COVID-19.

Rural areas in the US are losing their hospitals entirely, and residents are having to travel hours for care. According to the Cecil G. Sheps Center for Health Services Research at the University of North Carolina at Chapel Hill, 126 rural hospitals have closed since 2010, including six so far this year. That’s about 6%.

An analysis by the Chartis Center for Rural Health and iVantage Health Analytics this year found that about a quarter of the nation’s 1,844 open rural hospitals are vulnerable.

As The Washington Post described it last year, “Hospitals like Fairfax Community [in Oklahoma] treat patients that are on average six years older and 40% poorer than those in urban hospitals, which means rural hospitals have suffered disproportionately from government cuts to Medicaid and Medicare reimbursement rates. They also treat a higher percentage of uninsured patients, resulting in unpaid bills and rising debts.

“A record 46% of rural hospitals lost money last year. More than 400 are classified by health officials as being at “high risk of imminent failure”. Hundreds more have cut services or turned over control to outside ownership groups in an attempt to stave off closure.”

This is serious, and I’m making changes to the way I live and work. I’m working from home, trying to get enough sleep and avoiding crowds of any kind. And watching events unfold in what I hope is a once-in-a-lifetime event.

Charles Ornstein is a deputy managing editor at ProPublica 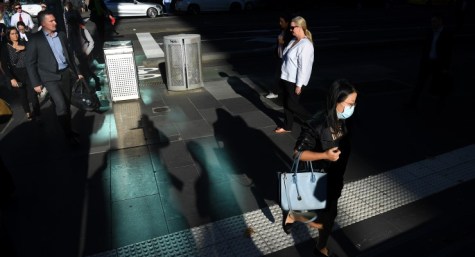 ‘Coronaviruses are a wily bunch’: a doctor explains why herd immunity isn’t going to save us

Lessons in History: what we can learn from… the Spanish flu

For those of you like me who don’t trust the government you can get up-to-date statistics independent of government and Big Media at these sites:

Crikey, you’ve been a bit irresponsible in how you have published this article. Other than a small reference to the fact that it was originally published by another outlet, there is no indication that every single point in the article is from a US context; sometimes the figures quoted are clearly US figures, sometimes its not. I accept that some of the points raised are universal, but the Australian experience of this pandemic will be different to other countries’, and if we are going to discuss the points raised in this article, then we’d be better of raising them in the Australian context.

To be fair, I have no doubt that most subscribers are smart enough to work this out themselves, and I have no doubt that Crikey is a bit resource-constrained, so maybe a totally new article is not realistic. But a bit of sub-editing to make the US perspective of this article would have done wonders. There is a lot of breathless reporting of COVID-19, and a lot of international transplantation of facts and figures. Outlets such as Crikey have a reputation for reliability; hence I’m holding you to a higher standard.

I agree. When an article compares “our country” to others, you have to be clear where it’s coming from.

I think we need to see the same graph of ages but with ‘death by any means” + bad flu season (or bad winter/summer/war) v’s same, same + COVID-19, to make a real world comparison.

The problem with the stat’s for me is that even when 80+ people have basically died because of respiratory problems involving all sorts of complications, including the flu, their Death Certificate actually says, at the time of death, they died of pneumonia. Now, if the word pneumonia is now being replaced by ‘COVID-19’ on death certificates, then a proper comparison is impossible.

“Now, if the word pneumonia is now being replaced by ‘COVID-19’ on death certificates, then a proper comparison is impossible.”

Ahh, yes indeed. There are two types of corona virus. The lab variety ( common cold ) and the wild one that allegedly escaped from Wuhan.

Why is all testing for these viruses done by mouth swab and not blood testing? Blood testing will reveal with greater accuracy which variety has taken hold. The chances are that 98% of the time it’s the common cold variety leading to complications such as pneumonia.

The article is about a country with a health care system not worthy of the name for the majority of its population, not an advanced, civilised western nation.

“This has a mortality rate of 10 times that”

And that is at the lower bounds of estimates.

Yes, to the other contributors, but really it’s obvious he’s talking about the US. The China figures are comparable because they got on top of it, once they realised the effect, in ways we won’t be able to sustain.

This is going to slightly overwhelm us, if we’re lucky. But we have a fool in charge also.

I would also like to say, Crikey, if you are short of content, see if you can get an interview with Professor/ Dr Brendan Murphy to gain an Australia perspective and strategy regarding the controls being put in place, to spread the peak of the epidemic which allows us to not overwhelm our health system.

Because this article is comparing a 3rd world nation, with both a communist dictatorship and the emergence of a new corona virus in a city called Wuhan, which was covered up for a couple of months and so the epidemic was upon them, hardly a second after the infection causing the epidemic.

It is reasonable article to publish, whoever, it noted the mortality rate to be 3 to 4% which is not accurate at all and I suspect that the figures were derived from the number of positive tests and the recorded number of deaths. This is one of those things that we should be on guard against.

Consider this, in the midst of a health crisis, how many non symptomatic people were tested and yet we know that you don’t have to be symptomatic to be a positive test. Thus there were and are a lot of people with no symptoms, who will test positive and so, if you extrapolate out, using Australia’s data the mortality rate from this new virus is less than 1%.