Good morning, early birds. Day one of Senate estimates saw revelations and accusations galore, and South Australia has proposed new laws that will make it easier to detain and quarantine people. It's the news you need to know, with Chris Woods.

A GLORIOUS DAY IN PARLIAMENT

Day one of Senate estimates delivered on multiple government scandals.

Coincidentally, Labor senator Murray Watt was at one point censured for using the word “rorts” to describe the day’s events.

As Australia records its first two person-to-person cases of coronavirus, the ABC reports South Australia has proposed new laws to make it easier to detain or quarantine people exposed to the virus, while The Conversation notes Attorney-General Christian Porter has detailed existing powers at the federal level.

The Sydney Morning Herald has three pressing reports out: an investigation into Australian branches of the “secretive cult” Shincheonji behind South Korea’s outbreak; news the University of Technology Sydney is preparing to close its campus if an emergency is declared; and — while less worrying — that packaging shortages from China could affect local chocolate stocks.

An advisor to Iran’s supreme leader has died after contracting the virus, The New Daily reports, and Indonesia has officially recorded its first two coronavirus cases, amid concerns over the country’s quarantine and screening processes, the ABC reports.

Closer to home, despite pleas from global medical experts for the public to stop “panic buying” face masks, which are not effective against the virus but are crucial for other health care providers,  Australian pharmacies are selling out.

THE COALITION KICK THE ABC (OUT) WHILE THEY’RE DOWN

Federal Communications Minister Paul Fletcher has “strongly encouraged” the ABC to consider selling capital city offices, notably in Sydney’s Ultimo and Melbourne’s Southbank, as the broadcaster grapples with a funding freeze set to take $84 million from its annual budget and result in up to 200 redundancies, The Sydney Morning Herald reports.

TALKING POINT: The ABC might be in even more financial strife, with Racing NSW boss Peter V’landys launching defamation proceedings over the 7.30 investigation into cruelty against former racehorses. And as Crikey detailed last month, there’s also all that pricey, life-saving bushfire coverage they’ve been up to lately.

The AFP commissioner laughs off a suggestion that police ought to have interviewed Energy Minister Angus Taylor before deciding that, doctored document or not, it’s all good. 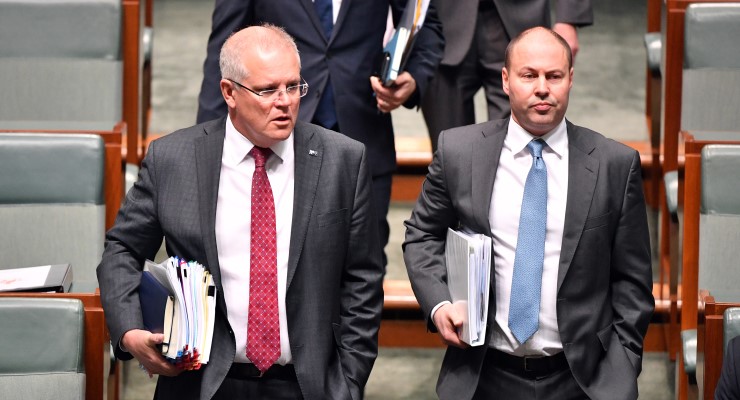 “After spending the last decade deriding Labor’s response to the financial crisis as inept, over the top and wasteful, the Coalition now finds itself facing a similar challenge after a weekend in which an already poor economic outlook dramatically worsened.”

“Australia had its first coronavirus fatality over the weekend as the infection rate continues to climb. Handshakes are now off the table, with the virus having some unexpected consequences for both beer and the environment.”

“The ALP has come up with a new policy: net-zero carbon emissions by 2050. It’s been encouraged by public opinion. It had to come up with something, what with its pro-coal stance on Adani and the challenge of comprehending the bushfires.”

Could it get easier for people to say yuck stuff about women in the workplace? Attorney-General: no, lawyers: yes.

More than 80,000 Uighurs sent to work in factories across China, report finds

The Treasurer is missing the mark ($) — Richard Denniss (AFR): “Treasury’s Intergenerational Report (IGR) will be out soon and if it’s anything like the last four, it will provide far more detail on the future costs of Youth Allowance than on the costs of climate disasters. While Joe Hockey’s 2015 IGR states that “extreme fire weather has increased, and the fire season has lengthened” his report provides no estimate of what this will cost the budget.”

Police need faster access to overseas information to fight crime and keep Australians safe ($) — Reece Kershaw (The Australian): “In 2020, communication happens instantly. Emails, messages, videos and countless volumes of data are sent between countries at the tap of a screen. It would be difficult to accept waiting months or even years for a response. Yet this is the reality law enforcement agencies often face when requesting data from overseas, particularly from the US, with much of our electronic information settling somewhere near Silicon Valley.”

‘People are crying and begging’: the human cost of forced relocations in immigration detention — Michelle Peterie (The Conversation): “As monotonous as detention can be, detainees are not allowed to become comfortable. Between July 2017 and May 2019, there were 8,000 involuntary movements within the system. Some of these were deportations, but others were forced transfers between facilities.”

Contingency Planning: if you run out of toilet paper, consider a subscription to The Australian.

“ALP accused the Coalition’s $2 billion bushfire recovery fund of not existing. As The Australian ($) reports, only five farmers and small businesses have received loans under the scheme.”
Wo, how EMBARRASSING ! Morrison mismanaged dealing personally with people and the whole tragedy, now this!

“Sports Australia received several different versions of McKenzie’s colour-coded spreadsheets on the day the 2019 election was called, with projects added and subtracted following those 136 emails”.

McKenzie went on to say she had no part in further additions, thus pointing to the PM’s Office and Morrison himself. A massive development in a gigantic government corruption story.

Constitutional expert Ann Twomey later testified to the Senate Committee that the minister had no legal authority to make changes. Certainly then, any changes made by anyone in the PM’s office would have been illegal. Wo, how EMBARRASSING! And unethical and corrupt.

The Corona virus comes along, the media circus moves on in the ecstasy of a big news story, and the LNP is let off the hook for using public money for political advantage, organised by the PM’s office.

Liberal strategists, Angus Taylor and Morrison found the soundproof room to pop their champagne corks and thank their lucky stars. Phew, that was close!