Good morning, early birds. This year's Closing the Gap report reveals a staggering failure to meet targets addressing Indigenous disadvantage, and the High Court has narrowly struck down the Coalition’s attempt to deport First Nations people. It's the news you need to know, with Chris Woods.

IF THE GAP FITS

Australia has — a decade after launching ‘Closing the Gap’ — overwhelmingly failed to meet targets for Indigenous childhood mortality, life expectancy, school attendance and employment, with The Sydney Morning Herald reporting just early education and Year 12 attainment are on track.

Indigenous Affairs Minister Ken Wyatt has now called for a new community-led approach in the face of successive government failures — and in an Oz op-ed ($) pointed to a refreshed agreement between the Morrison government, COAG and the Coalition of Peaks. Scott Morrison will deliver the report itself in Parliament today.

In not unrelated news, the ABC reports two Indigenous men have been released from immigration detention after the High Court struck down the Coalition’s attempt to deport First Nations people, 3-4.

TALKING POINT: All that came between the government and, really, the final ‘fuck you’ to Indigenous Australians, was a single judge’s vote.

THE NORMALISATION OF RACISM

Labor frontbencher Andrew Giles will today call for a new anti-racism campaign to meet a “creeping normalisation of hate and racism”, specifically the spike of xenophobia targeting Asian-Australians amid the coronavirus outbreak.

Matt Canavan left two $1 million-plus properties — one in Canberra and another in Yeppoon, Central Queensland — off his 2019 declaration of interests, according to The Guardian.

Fresh from running out the clock on fossil-fuel disclosures, Canavan says he was not required to declare the properties for the 46th parliament after doing so for the 45th — a claim rebuffed by the register of senators’ interests. It’s neither the first time he’s failed to declare a house, nor the first time he may have gotten some dodgy advice.

I’m at the driest end of economic policy but support any and all measures to build a coal fired power station in North Queensland, including full Commonwealth underwriting, and defence force operation if necessary. Build then sell the asset by float to North Queensland users.

The former Liberal MP and Outsiders co-host called for a taxpayer-funded coal plant because “North Queenslanders are entitled to the same standard of living as the rest of coal powered Australia”.

“When the law is gone, what happens? Consider the sports rorts affair. The political shit has been spraying off the fan for weeks, with revelation after revulsion about the Coalition government’s lavishing of public money on ‘grants’ chosen solely to get itself reelected.”

“With the AFP no longer investigating the incident, Angus Taylor appears to have got away with using a falsified document and inflated numbers to attack Sydney Lord Mayor Clover Moore.

“Taylor has form in this arena. He’s also used questionable numbers in an attempt to destroy the wind industry.”

Welcome to Collinsville, the new home of the climate wars ﻿

“Collinsville was once considered so left-wing that it earned itself the nickname ‘little Moscow’. Now, the tiny mining town in northern Queensland is at the centre of a bitter dispute over coal-fired power between moderate Liberals and conservative Nationals.”

Education key to closing the gap ($) — Ken Wyatt (The Australian): “For the first time in the Closing the Gap process, Indigenous expertise is at the centre of decision making – this represents an opportunity to set, implement and monitor closing the Gap along with Indigenous Australians.”

Behave as a team, Morrison tells the troops — Michelle Grattan (The Conversation): “As he battles to put containment lines around the damage the Nationals’ meltdown is causing his government, Scott Morrison has given his party room a pointed lecture about unity.”

High Court and the question of ‘Aliens.’ — Nat Cromb (IndigenousX): “The white power structures demonstrate their ubiquitous presence in our lives once again with the anticipated High Court decision in the matters Love v Commonwealth and Thoms v Commonwealth.“ 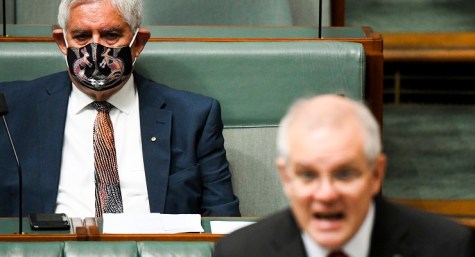 Crikey Worm: how rich is the Catholic Church really?

So where is any demand to end Howard’s Intervention / Re-Dispossession, given its obvious failure?

Far from the 2007 Intervention / Re-Dispossession / Northern Territory National Emergency Response being beneficial, successive ‘Closing the Gap’ reports have found that oppression to be profoundly damaging. Yet such facts are simply waved away. Haters praise Howard’s Re-Dispossession, just as they praise the creation of the Stolen Generation and applaud the fact that it is continuing.

‘Team Australia’ is not merely vicious, racist, divisive and ignorant, but also suppresses the excluded, whitefella as well as blackfella. It is utterly hostile to any notion of Aboriginal identity that looks to non-capitalist standards. Reinforcing that dystopia we have the denialists, the haters (brought to the fore by the exploitation of asylum-seeker hate, a hate now consuming its main promoter, the ilLiberal Party), the media, transnational economic ideology, the extra costs of living in rural and remote areas for such Aborigines, the marginalisation of many urban Aborigines, and especially governmental contempt for consultation and disinterest in action.

Howard’s Intervention / Re-Dispossession should be reversed, an ATSIC re-established, government departments involved in Aboriginal affairs have all their staff re-apply for their positions, our political class to offer an Apology for never listening, and finally undertake to do so.

Instead we have a media that when given an advance copy of head of government morrison’s excuse and deceits to be inflicted on the House today, simply reprinted it in its usual fawning and deferential style. See for instance https://www.theguardian.com/australia-news/2020/feb/12/closing-the-gap-scott-morrison-to-push-new-approach-as-report-finds-little-progress

As a manager, morrison’s consistent failures are gross and appalling. Until we start to condemn bad management we are not likely to get anything any better!