Good morning, early birds. In irony lost on no one, Coalition ministers say they're frustrated by RBA governor Philip Lowe's lack of detailed economic policy, and Peter Dutton wants to expand coronavirus quarantine camps. It's the news you need to know, with Chris Woods.

Reserve Bank governor Philip Lowe has left Coalition ministers frustrated by a “lack of policy detail” in his call for the government to stimulate the flat-lining economy, The Australian ($) reports, following a private meeting ahead of yesterday’s National Press Club address.

TALKING POINT: There’s one RBA proposal they could take up: raise Newstart. Not only does Deloitte say it would stimulate the economy at a rate of 3.3:4, but it could, you know, save lives.

Meanwhile, a Melbourne couple has accused DFAT of refusing to evacuate their toddler from Wuhan, the ABC reports. An Australian citizen, the child had been briefly staying with grandparents and would face complications travelling unaccompanied.

The Electric Vehicle Council has announced that EV sales more than tripled from 2216 in 2018 to 6718 in 2019, according to The Sydney Morning Herald.

While that’s maybe not as impressive as it sounds — our 0.6% sale plug-in rate pales in comparison to countries such as Norway, Iceland and China —  it has spurred EV advocates to call for a ban on new, petrol cars within 15 years.

‘I WILL NOT BE BULLIED INTO SAVING THE WORLD’

Scott Morrison has declared he won’t be “bullied” into climate action that involves raising taxes or energy bills — an interesting turn of phrase for a man whose party, as The Guardian reports, is currently being bullied by their Coalition partner into doing exactly ‘nothing’ on climate change.

SLOW TO THE TRIGGER

Former UK prime minister David Cameron‘s bodyguard forgetfully left both a loaded pistol and the Brexit-creator’s passport in a plane toilet, where it was found by another passenger, the ABC reports.

HOT TAKE: What an apt metaphor for the way Cameron left the country.

It’s not me who gives you the money, it’s ScoMo — so vote Liberal come May… Because if you don’t, I won’t have a job. 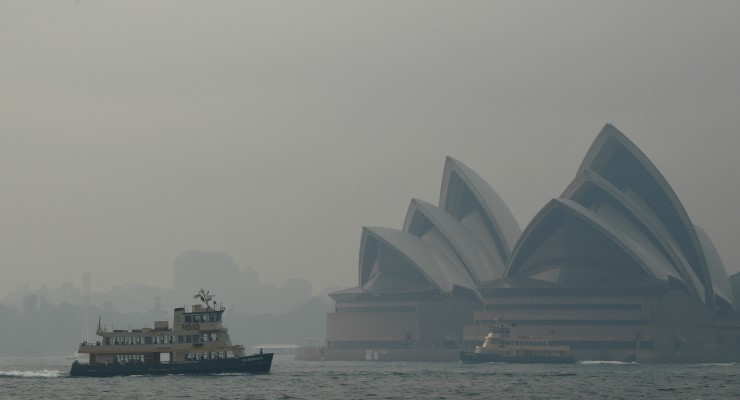 Australian tourism can bounce back from the bushfire disaster

“Tourism has been an enormous growth area for Australia in an era where a lot of our other industries have been standing still. Visitor numbers have doubled in the last decade alone as China’s growth rubs off on us. We will soon be regularly seeing 1 million visitors per month.”

ACT takes the lead on another frustrated federal issue

“Whether it’s decriminalising cannabis, legalising marriage equality, or removing abortion from criminal law, the ACT is often seen as taking the lead on national issues frustrated by federal filibustering.

“Now, the territory appears to have responded to the federal government’s long-debated and widely-criticised Health Star Rating system for packaged food, launched in 2014.”

Racing cars in a catastrophe: it’s time to ditch the Grand Prix

“The Grand Prix operates on the basis of a subsidy of $60 million a year from the Victorian government. Much of this is justified by arguments about direct benefits to tourism, but even the most extravagant claims of economic benefit amount to no more than $40 million.”

WHO concerned Indonesia appears to be coronavirus free

Why Andrew Constance could rise from the ashes to be the next NSW premier — Alexandra Smith (The Sydney Morning Herald): “Meanwhile, Bega MP Andrew Constance, the NSW Transport Minister, emerged as one of the most authentic and popular MPs around. Amid the devastation, he has shown he is premiership material. If he wants it.”

Permanent commission to help veterans and save lives of others ($) — James Brown (The Daily Telegraph): “The new National Commissioner for Defence and Veterans Suicide Prevention will be independent of both the Department of Defence and ­Department of Veterans’ Affairs. That independence is critical: the Commissioner needs a mandate to turn over rocks, look for answers, and be willing to call out the issues where they lie.”

Diary of a coronavirus evacuee: ‘Everyone’s trying to avoid contact with each other’ — Daniel Ou Yang (The Guardian): “As it reached 10pm, I saw a lot of Chinese rushing to the front, and I was encouraged to join them, so I did. They were all going on the same Auckland flight as me, so we were allowed to cut the queue to be processed first.”

Observe the Rightist political disinterest in industry policy, versus its fabulous giveaways to its filthy rich mates. Or the abbott / Trumbull / morrison Misgovernment’s relentless attacks on both those working and those not working.

To quote economist Professor Peter Brain from 2001,
“Australia’s failure to adopt the standard approach is perplexing. When very weak versions of it were applied between 1984 and 1996, they were spectacularly successful in driving production growth in pharmaceuticals (Factor f scheme), shipbuilding (subsidies), engineering (DIFF scheme) and export growth for industries (cars) which received export assistance. The benefits from these schemes were reduced or ended with the Coalition Government’s attack on business welfare based not on the facts, but on economic rationalist ideology.”

In truth, of course, the ruling class sees every dollar we the 99% earn as money they should have been able to take off us. Filthy rich therefore loathe any approach that strengthens us and our economy. FYI, class war.

Observe that Border Generalissimo-MP Dutton is not proposing to spend a cents either to upgrade these facilities or to strengthen a health care system that will obviously face a surge.

Entirely in character, of course. Thousands are prematurely dying from the casual abuse of the ruling classes’ power to ensure money that could easily be made available instead goes via Budget rorts gifted by the politicians they own to their fast cars, 500-square houses, women, and tax havens. Austerity in the U.K. is now murdering 39,000 people a year on the statistics, with none of the concern shown for the coronavirus.

Australians with lower incomes are dying sooner from potentially preventable diseases than their wealthier counterparts, according to a Nov ‘17 report (“Australia’s Health Tracker by Socioeconomic Status”) that tracked health risk factors, disease and premature death by socioeconomic status over the past four years. It assessed that 49,227 more people on lower incomes died from chronic diseases – such as diabetes, heart disease and cancer – before the age of 75 than those on higher incomes.

Precarious work tends to damage health as well as income. In a society focussed on money, only transfer payments stand between ill-health and enormous personal suffering. Ask the injured veterans told to survive on $6.20 a day.