While there are plenty of red flags dotted on the horizon, there are actually lots of reasons to be optimistic about Australia's economy in the upcoming year.

Once you go looking for reasons to worry, they’re easy to find. I’ve written plenty over the last year about risks, and about the prospects of a 2020 recession.

But we must beware of confirmation bias, the human cognitive quirk that leads us ever deeper into a web of beliefs we already hold. It’s more enjoyable to read about bad news when we’re worried than to have those beliefs challenged.

So, what are the counter-arguments to perpetual doom and gloom?

Growth in a time of risk

The global economic landscape is never smooth and featureless. There are always risks. Australia’s average growth of 3.3% a year over the last 30 years has happened during periods where the reasons to worry were serious and very numerous. Wars, crashes, tsunamis, etc. A terrifying list of risks and healthy growth turn out to be long-time companions.

There is a generation of people — about my age — whose beliefs about the nature of global markets were forged in the fire of 2008/09. We — and I include myself here — tend to see disaster in every market blip. But market catastrophes are, in truth, the exception not the rule. It is important not to overdose on pessimism.

In the spirit of open-mindedness, let’s scrounge around and see if we can find some reasons not to panic.

The clearing of risks

In 2019, risks piled so high they blacked the sun. A trade war, Brexit and the UK election. Political strife in Italy. Major unrest in Hong Kong. Each of these is a potential flashpoint, a small fire that could turn into a major inferno.

But, of course, risks don’t only worsen; they can also fade away, creating a clear path for growth. As 2020 dawns, the US-China trade war seems to be approaching a detente and the uncertainty around Brexit has dramatically reduced following the election of the Conservative Party in the UK.

That might give firms in the US, Asia and Europe confidence to go ahead with investment decisions. If you were unsure whether to build a new HQ in Liverpool or Rotterdam, it’s now clear you should choose Rotterdam. If you wondered whether to build a factory in the Pearl river Delta (China) or the Mekong Delta (Vietnam), you can now choose the former with more confidence.

When uncertainty clears up and investments go ahead, growth should follow. Those factories need builders and materials, and then they fill with workers. All that activity flows onward and might eventually cause Australians to encounter that long-forgotten thing: a decent pay rise.

Domestically, not everything is terrible. Wages growth and underemployment are somewhat grim, yes, but paradoxically, it is in the labour market that we also find a shining beacon of hope.

If you have to choose one factor that is outperforming expectations, it’s employment growth. A lot of Aussies are in jobs and a record share are in the workforce, as the next graph shows.

Australia’s strong labour force participation is important to remember when we compare our 5.3% unemployment rate to America’s 3.5% — their labour force participation plunged from 67% to 63% in the global financial crisis and never recovered. The US unemployment rate looks low but it doesn’t consider the high proportion of Americans not even looking for work.

Work experience builds human capital. It is far better for future growth prospects to have people in work — even if some of it is unreliable part-time work — than to have people out of work. Our labour force situation sets us up nicely for a potentially fecund period ahead.

We know we are dependent on China’s trajectory, and we know its growth rate has fallen to a record low of 6.2%. But that is not so bad as it seems.

China’s GDP is 10 times what it was in 2000. One per cent growth in Chinese GDP today adds as much activity to the world economy as 10% growth did back then. Six per cent growth today means China is still adding an Australia worth of economic heft (over US$1 trillion) every two years.

Each year, China contributes truly mind-boggling quantities of demand to the globe. Whether you work in education or tourism, wine or milk, ore or pearls, the growth of China is making your opportunities explode.

How secure is China’s growth? That has been the big question. Nothing is certain, but China has dealt with a substantial risk that seemed to be brewing in its financial markets. Social financing — a kind of unregulated lending with a high propensity to go bad — was through the roof, placing the country at risk of a financial crisis. As the next graph shows, China decided reducing that risk should be a priority for its centrally controlled economy and promptly reeled it in, reducing the risks.

With China continuing to grow steadily, the domestic economy putting a lot of people in jobs, and the global economic landscape suddenly brightening, 2020 is a year that might — just might — not have the recession so many of us are worried about.

Why Swan was right on stimulus 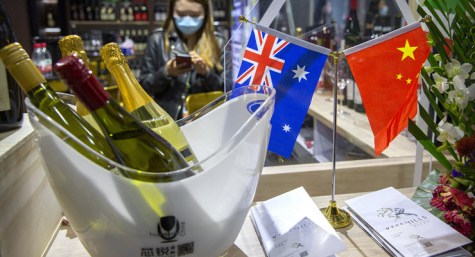 The employment participation graph looks peachy but gives no clue what percentage of those ’employed’ are doing the legal definition of one hour a fortnight. It appears as though participation has increased but it can be misleading if many of those are underemployed & that number is burgeoning each year.

I’m in that boat, and I want to get off!

I have less hours as a direct consequence of a recent period of low volume of sales. I am hoping it isn’t wage stagnation causing it. Otherwise, *gulp*.

If you look at peoples confidence and retail we are in a recession now – what you mean I guess is that when the graphs on computers all align downwards then it will a recession – so you are talking technical recession.

To ask the question is to know the answer.
If there was no chance of a Recession then the media would not ask the question.
YES, WE ARE GOING TO HAVE A RECESSION.
The world environment is building for one and the Drought will raise prices of foods and commodities.

What about the Trickle Down”? That must be due any time?

How do the “Best Economic Managers” Australia has ever seen keep getting away with an “Economic Master Plan” that has an unscheduled delivery date for the Trickle Down payoff. Such a plan would not pass a basic Business Case evaluation in any business I’ve been involved in, yet here we are!

The independent media should be hammering Scotty from Marketing and his corrupt crew on this, yet we hear no hard questioning on the subject.