Blown budgets. Sugar daddies. And a nuclear waste dump. After a big week in news, here are the stories you may have missed.

Parliament has risen but the business of government continues. On Monday the auditor general’s office released its 2018-19 report, including the fun news that our major defence projects budget has blown out by $1.2 billion over 12 months.

And if that sounds bad, keep in mind it brings that particular budget line to a total overrun of $24.4 billion more than was originally signed off on, currently running a combined total of 57 years behind schedule.

Just to be clear, that’s about nine years per project. We’re not actually waiting on 1960s military technology.

Still, who can put a price on Australia’s safety, huh? That’s especially the case when a lot of that money and time is because of one particular project: the F35 Joint Strike Fighter, aka The Worst Idea In Military And Aviation History In One Eyewateringly Expensive Package

$14 billion of the budget — and over US$100 billion from American taxpayers — is currently tied up in the F35, a plane being designed by Lockheed Martin in the US, which was originally designed to do the job of a range of different fighter jets. And so instead of a bunch of expensive planes which are designed to do one thing well, the F35 can do a range of different things — air-to-air combat, launch missiles at ground targets, perform vertical takeoffs and landings — but does them all terribly. Maybe the plan is to sell them to our enemies?

The good people of Western Australia have been following the fallout of the Corruption and Crime Commission’s (CCC) investigation into former Liberal upper house MP Phil Edman. That’s former in the sense that he failed to keep his seat at the election, and also in the sense that he quit the party before they could expel him.

The CCC found that Edman was using his parliamentary allowance for things that don’t typically fall under its purview, such as speeding fines, car rego and going out on dates around the nation with women he met on a sugar daddy website.

And if that sounds a little familiar, it’s because Edman isn’t the first Coalition MP to explore the exciting world of sugar daddying: almost exactly a year ago news broke that Victorian Nationals MP Andrew Broad had been having sugar daddy dates in Hong Kong — a scandal which eventually cost him his job.

It’s also worth noting that Edman reportedly charged around $18k for dinners of “The Black Hand Gang”, which he has been at pains to explain was a collegiate gathering of Liberal upper house MPs and that the name was merely a name — an explanation similar in tone to Grand Moff Tarkin saying he doesn’t understand why everyone’s making such a big deal about the name he chose for his mobile departmental office and community centre, the Death Star.

Resources Minister Matt Canavan has narrowed down the winners of one of the most hotly — or at least most radioactively — contested honours in the nation: who will be Australia’s Next Top Nuclear Waste Dump?

Nuclear is, after all, the dream of those who accept that climate change is going to make burning coal impossible in the coming years, but still want to ensure that power generation relies on mining concerns remaining at their current exalted status. And sure, that dream is still a ways off since it’s definitely never going to happen, but the first step is committing Australia — more specifically, South Australia — to absorbing the world’s unwanted poisons. And hey, it’s not the first time that SA has enjoyed being a perfectly safe nuclear option. Isn’t that right, Anangu people living around the Maralinga test sight?

A potential site near Hawker was ruled out, meaning that now the frontrunners are a site near Kimba and a different site near Kimba. Fun fact: the town’s name is derived from the Barngarla word for “bushfire”, which immediately puts one’s mind at ease about the possibility of a nuclear waste facility being plonked in the area.

Still, at least the possibility of radioactive mutation would provide an appropriate backstory for that giant galah they have. It’ll be the Godzilla of the Eyre Peninsula! 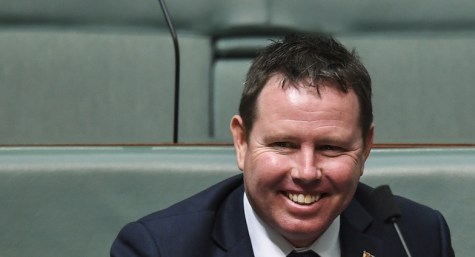 The blue-sky marketing madness of the F-35

Hey, how stupid do you think we are? Stopping climate change requires more than abusing coal as it fades out. The enemy of the greenhouse is fossil carbon. That is, coal, oil and gas. Yes, and gas! Coal power stations are crumbling on their way to retirement, whereas the gas industry is expanding fast throughout Australia, with installations and pipelines that will leak methane for another century of global warming. Gas must go, and with it everything that depends on gas. So those of us who want to have windmills waving virtue from the horizon, will have to settle for nuclear as their backup.

One wonders just how much damage that fool’s fool, Matt Canavan, can do in 3 years.

More lapdog regulatory agencies, or do we just not care anymore?

Yes, that would be right about Kimba, however, as a former Radiation Safety Officer, I really wouldn’t get my knickers in a twist about the radiation that could come from the proposed dump for low level medical isotope waste.
You would certainly receive more of a dose, if you lived in a granite house or lived near a granite outcrop, or even flew to London and back.

As for Maralinga, Australia was as complicit in blowing up atomic bombs and exposing the inhabitants, all I cam say is that it was shameful.

Dead silence has followed Ratty’s comment. It implied that ionising radiation is natural and pervasive; it can be measured with ordinary physical instruments; and measured levels are usually too low to present any threat to humans.

His advice cast light in an area that some Crikey readers want us to think is dark, mysterious, artificial and threatening. Inducing a frisson of fear among a group of innocents might seem harmless, like creating a horror show for those who enjoy being afraid in company. However scaremongering killed many people in Japan, whereas the radiation killed no one at all.

Forget the F35 lemon and go for the Sukhoi Su-57, but only if Washington says yes.