As the economy slows, luxury cars are moving faster than ever

Are Rolls Royce sales a sign that Australia is churning out money while holding wealth back from the great many? The answer is not what you might imagine.

Car sales are in a slump. Down 8.2% for the year, and each month of 2019 seemed to be worse than the one before. November’s vehicle sales were down 9.8% on the same month a year prior, another indication that Australia’s economic heartbeat grows fainter.

But amid the gloom there’s one corner of the car market that seems to be doing rather well. Luxury vehicles. 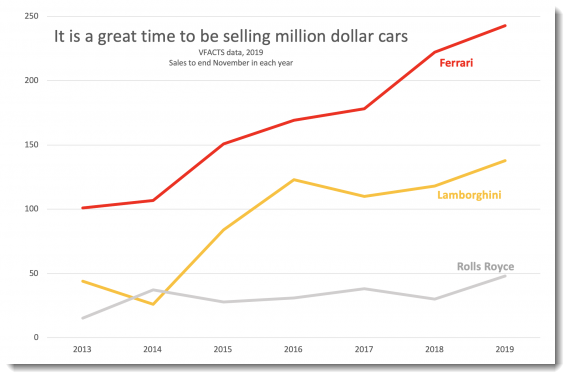 How can it be that in a year where Holden sales are down 29% and Nissan sales down 12%, luxury automobile sellers can be enjoying such rich conditions? Is it really the case that while the rest of us tighten our belts, the 1% is splashing around the cash?

And have no doubt, the amounts of cash we are talking about are substantial. A new Rolls Royce Phantom costs $1.1 million — which is more than the median Sydney house price. 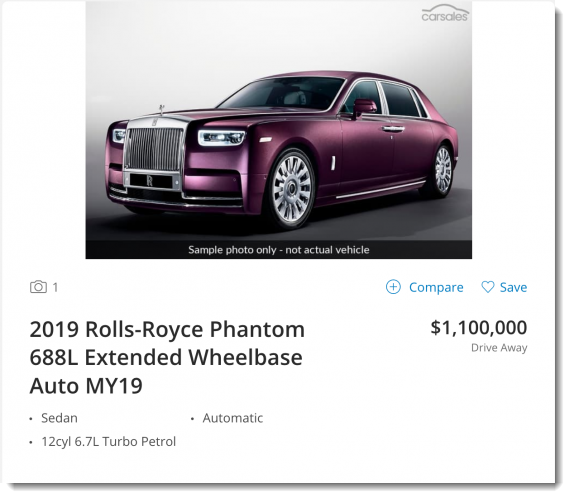 Rolls Royce sold a record 48 of its hyper-expensive vehicles in Australia in the first 11 months of the year, up from 30 vehicles in 11 months last year. It is expanding in Australia, recently celebrating the opening of a new store in Brisbane.

Is this a sign Australia’s economic system is churning out great wealth while holding wages down for the great many? The answer is not necessarily the one you imagine.

We should also look at sales of other expensive cars. Here we get a rather more nuanced picture. If we add together sales of all Jaguars, BMWs, Mercedes, Lexus and Audis, we find they have fallen 5%, only slightly less than the market overall. 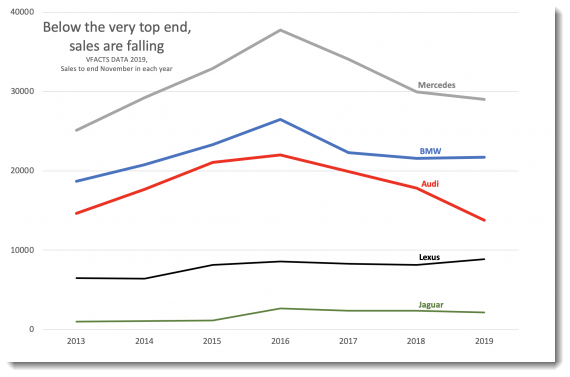 Strength is limited to the very peak of the car market. This is not even a story about the 1%. There are 260,000 Australians in the top 1% (depending how you look at it), and only 48 Rolls Royces sold this year.

This is about a more elite club than that. A club that admits far fewer than one in every hundred people. And to be honest, Australia’s economic system doesn’t produce very many people who gain admittance.

Australia’s Gini coefficient — the measure of inequality — showed equality improving between 2007 and 2015 before worsening again recently. But that’s about income not wealth, and the closer you get to buying a Rolls, the more wealth matters.

The top 20% are no doubt getting richer, which has a lot to do with property prices. But of course you can’t turn your house in Sydney into a Rolls Royce without selling it or mortgaging it. To buy a Rolls you need liquidity, and lots of it — usually obtained by owning a company you can sell whole or in part.

When it comes to extreme wealth we see less dramatic change. The very top of the rich list in Australia is relatively static — full of Pratts, Rineharts and Packers. Lots of property and resources wealth, and for all the attention focused on Scott Farquhar and Mike Cannon-Brookes of tech company Atlassian, they look pretty lonely on there as self-made young people. There are few huge new fortunes being minted in Australia.

Meanwhile, it turns out that the surge of Rolls Royce sales we see in Australia is part of a global phenomenon. The company (owned by BMW since 1998) sold a record number of cars in 2018 — over 4100 quietly purring handmade units. Sales were very strong in China.

Around the globe, Rolls Royce sales are booming in places the Chinese diaspora favours. Vancouver in Canada is one such location. It is no surprise that Australia might be another.

Rolls Royce Motor Cars CEO Torsten Müller-Ötvös told media  “… the majority of our customers are global citizens — they are maybe raised in Asia but went to universities in the United States. They are very international.”

The popularity of the Rolls Royce brand is in part due to the launch of a new SUV, named the Cullinan, after the largest diamond ever found. While diamonds are traditionally beautiful and petite, however, the Rolls Royce Cullinan is, um…

This deep freezer on wheels, priced around $700,000, is apparently selling very well to the new, younger set of customers Rolls Royce is attracting.

Rolls Royce is, understandably, secretive about exactly who is buying their cars. No doubt some have been sold to Bitcoin investors, top bankers, and even dentists who saved up over several years.

But it seems very likely the boom in sales in Australia — along with the strength in Ferraris and Lamborghinis — has a lot to do with the attractiveness of Australia as a destination for moneyed elites sniffing the wind in China and getting some of their family and some of their assets offshore.

Which is to say it is not that our economic system is suddenly generating lots more extreme wealth; more that it is attracting lots more of it.

The car market is an interesting window on the phenomenon of Chinese capital flight, but not a market in which changes are likely to have far-reaching effects. The impact on property prices is far more relevant, because the supply of property is far more stable — you can’t just load extra units on a ship.

If Chinese buyers are buying top end property — and despite some rule changes, they are — that creates a ripple effect that changes the property market overall.

You would not think somebody on an average wage or newstart could afford a Rolls Royce, but they are the ones paying for them, their sacrifice from Scomos attacks on their incomes is financing the greedy rich and the luxury cars and mansions, and so are you fools.

The 20 percenters are going to be careful where they drive and park in the brave new world of increasing inequality. Of course they will be able to afford armour plating.

And I have long wondered why a country would allow non-citizens to buy real estate. It is quite difficult to mount a case for the positive and easy to see why it’s a dumb idea.

Quite a few smarter countries don’t allow it.

When the revolution happens the rollers will be conspicuous.

Nah!
It’s OK if they are buying those units in those dodgy built blocks. That way local developers get the loot and it trickles down to us peasants.
Well that’s what our pyrophobic PM says.