While there is often a core of truth in stories about Mexican drug cartels, the deeper picture is getting swept aside in News Corp's sensationalised reporting.

In November, Australian News Corp journalists visited a meth lab that had been recently raided by police in the northern Mexican state of Sinaloa, reporting the story back to Australia with heavy input from the Australian Federal Police’s international liaison office here in Mexico.

The resulting story, syndicated and reiterated across News Corp’s widely-read mastheads, has it all: a newer, deadlier drug “flooding” the streets of Australian cities, manufactured in “filthy” makeshift labs in the jungles of the developing world.

The spectre of brutally violent brown men who continue to escape law enforcement hovers over it, while the police do an honest job fighting a deadly threat — holding it off just enough to tell us how bad it is, how it requires many more jackboots on the ground.

The problem is the use of sensationally tired tropes — the “Mexican jungle lab”, the “fearsome cartels” who “flood” national markets with killer drugs, and the presentation of these tropes in lockstep with the authority of police forces. These distorted lenses do little to protect anyone, save perhaps News Corp readers from a truth that doesn’t neatly map onto some kind of Netflix imaginary of “bad hombres” and bad drugs.

We don’t know for sure that the methamphetamine that’s sold and bought in Australian cities and towns has its provenance in Mexico, and we certainly don’t know the intended destination of the meth made in News Corp’s jungle lab. The News Corp story actually makes this pretty clear: its authoritative map of how meth may or may not travel from Sinaloa to Sydney suggests that the drug arrives via three ports on three different continents. For a monstrous mixture that is apparently being specifically sent to “target Australia”, the aim of this dangerous enemy seems… rather wide.

It’s important to consider the way the reporters got access to the recently raided “jungle meth lab” — that is, via an embedded journalist with the Sinaloa state police. Leaving aside for now the possibility that the lab was not, in fact, in the jungle — which makes up a very small part of the northern desert border state of Sinaloa — that the journalists were led to said lab by the police should be an immediate red flag that more reporting was needed.

It is well known that municipal, state and federal police forces are a constituent part of these criminal organisation’s activities. State police, especially if they’re the only local sources, are therefore arguably among the flimsiest possible for telling a factual story about the trade. They will have their own interests in how the trade and its associated violence is presented to the world. This does not appear to have stopped the journalists posing with their police sources and army escorts as part of the story, bravely standing in the middle of the alleged jungle wearing helmets and flak jackets.

As the story’s only other source, the Australian Federal Police has a very different relationship to organised crime activity in Mexico, being in the country with the mission to “enhance law enforcement cooperation and intelligence sharing between Australia and Mexico, primarily to counter the supply of cocaine and methamphetamines … to Australia”.

However it is notable that the AFP in Mexico has now featured prominently in several news stories about the passage of Mexican-made meth to Australia, and in this they are clearly making a consistent effort to demonstrate the thoroughness and toughness of the Australian state in combating meth smuggling; described as an “ever-evolving threat” by the AFP news publication Platypus Magazine.

Without more careful reporting, dramatic stories about the danger and opacity of “Mexican drug cartels” helps to justify the need for tough intervention — there’s no endgame with an “ever-evolving threat”, just the perpetual language of war.

But of course, that is always the intended effect of stories like this one. Ephemeral enemies (a feeling, like terror, or a chemical compound that produces them, like meth) are an ever-renewable resource for the reiteration of the next boogie man coming for our children; for the endless need to send troops to battle.

Meanwhile, body counts go up on all sides of the wars while the interests of the rich and powerful remain intact. We need reporting that interrogates why this is — and this kind of journalism isn’t possible if it starts and finishes in a police ride-along.

A bit of meth-in’ around, when chemistry teachers go bad 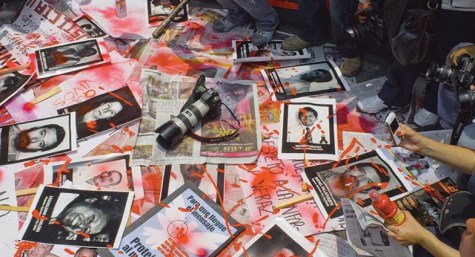 Mexico’s war on press freedom is a blueprint for Australia

thanks for this takedown of pretentious self-serving reportage, and they might have the wrong jungle
industrial scale production of jungle meth or ya ba from Burma probably reaches Oz faster and more directly

Thank you for this informative and useful article, Ann. I hope to see more detail about the methamphetamine trade to Australia as it becomes available.

Ah, the 40+ year War on Drugs. Another of Reagan’s great successes. Unfortunately, the only winners have been organised criminals and cartels. They have made billions, if not tens of billions, from supplying the much sought after illicit substances that the very rich (coke & heroin), rich (coke, heroin, meth and grass) and poorer (crack, meth, pills and grass) customers of wealthy western countries demand. Not only have they got incredibly wealthy, but these criminals now have armed militias capable of shooting it out with police and military units, and have built cults around them that include just about every strata of political and civil society. There is no end in sight, unless we accept the one clear truth that prohibition does not work. Didn’t work for alcohol and hasn’t worked for drugs.

The crime bosses are the big winners from the ‘war on drugs’ but not the only winners. It’s in the interests of police to perpetuate this ‘war’ to continue sucking public money for their boys and their toys, and for media barons to publicize it because fear sells papers/clicks. All very cosy.

I suspect you will find that the drugs that come out of these ‘jungle labs’ is equivalent in purity to anything from a Swiss medical research lab. They have no economic interest in providing adulterated stuff from there.

The crap comes in the local processing, you know, at the meth lab down the road that do have an economic interest in adulterating it here, in our ‘backyard labs’.

Unwittingly racist, ignorant and stupid, all in the one breath.

It takes practice to be that dumb.

Research from not very long ago attributes zero drug deaths to, say, MDMA, and all deaths attributed to that drug due to the adulteration.

War on drugs, just as effective as Vietnam. When do we get our Tet offensive on this and have the US leaving their high Commissions via helicopter,(leaving their servants to be slaughtered, along with family)