Is this curtains for the arts in the Australian government? Not quite.

The reshuffling of the bureaucratic deckchairs doesn’t really mean the end of the Arts ministry. But that doesn't mean we shouldn't be worried.

The Arts ministry has been killed off by Scott Morrison in his latest public service reshuffle, and cultural leaders and arts lovers aren’t happy.

The announcement of the new departmental arrangements was greeted with howls of dismay from the sector, beaten down by years of funding cuts.

The ABC’s Virginia Trioli took to the tweets to decry the ministry’s abolition. “Gone,” she lamented, following up by pointing out that “I can’t remember a time when ‘Arts’ was not in the portfolio title. Being assumed into another department is not the same thing.” 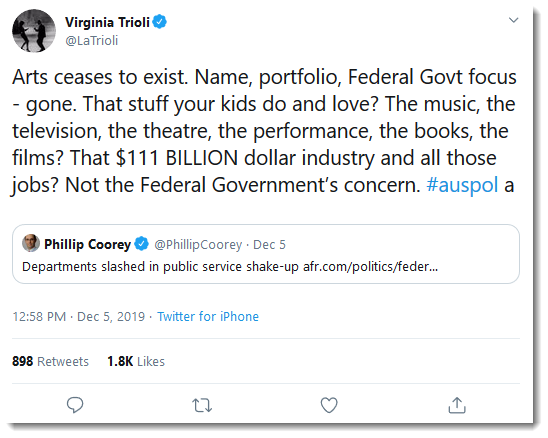 “I think [the] news is shocking and has a detrimental impact on artists who are already feeling the pain of cuts and multiple multi-year funding applications,” the National Association for the Visual Arts’ Esther Anatolitis told ArtsHub. “We’re still dealing with the shockwaves of the last year’s funding cuts. So when you have an unannounced restructure it contributes to that sense of disarray and confusion.”

So, are the Arts really “gone” in the new ministerial arrangements? Not really, no. The arts will live on in the public service, just under a new structure and a new department boss.

Those with long experience in the Canberra bureaucracy will know that changes of ministerial letterhead are regular occurrences in the Australian Public Service. As a junior ministry, the Arts has never been its own standalone department, but has rather been shunted around various parent bodies depending on the whim of the government of the day. In the Hawke years, the Arts was seen as “heritage” and was part of the Environment department; John Howard moved it into Communications under Richard Alston, where it stayed for 11 years.

Under Kevin Rudd, the Arts portfolio moved back to Environment under Peter Garrett, then to Regional Development under Simon Crean, into the Prime Minister and Cabinet portfolio of Julia Gillard for a time, then back into Regional Development for the final Rudd cabinet. When Tony Abbott took office, Arts was moved to George Brandis’ Attorney-General’s department, and then back to Communications under Mitch Fifield and Paul Fletcher.

Yesterday’s announcement sees the Arts follow Communications into the new super-department of Infrastructure, Transport, Regional Development and Communications, where it will no doubt exist as a dedicated sub-department with its own first assistant secretary (currently veteran mandarin Stephen Arnott, who is expected to retain his spot).

The various statutory agencies like the ABC, SBS, Screen Australia, the Australia Council, and the national galleries and museums will retain their quasi-independence, reporting to their boards and then on up to Simon Atkinson, the Infrastructure secretary and the heir apparent to the new super-entity.

In other words, the reshuffling of the bureaucratic deckchairs doesn’t really mean the end of the Arts ministry or the dismantling of the Arts portfolio. But that doesn’t mean there won’t be any disruptions. The news that outgoing Communications Secretary Mike Mrdak didn’t even find out about the MoG until Wednesday afternoon suggests that there will be plenty of chaos. While the dust settles and the public servants struggle to work out what the new arrangements mean, it’s fair to say little actual work will be getting done.

More importantly, though, the erasure of the name “Arts” signifies the degradation of the idea of culture as a meaningful symbol within the Australian government. This matters, because art is made of symbols, and symbolism cannot be separated from culture.

As a number of seasoned observers pointed out yesterday, the composition of the public service portfolios tells us a lot about the priorities of the government of the day. The fact that there is no standalone ministry within the Morrison government called “the Arts” tells us something important: that the arts and culture are not seen as important by this prime minister.

In this sense, cultural leaders are right to be worried.

STOP PRESS: After we published, a spokesperson for the Minister for Communications, Cyber Safety and the Arts said got in touch to say:

Is the outrage over the abolition of a standalone arts ministry justified? Send your thoughts to [email protected]. Please include your full name for publication.

How small is the government’s arts package? Very, very small

The only art this prime minister is interested in is a happy-clappy lightshow accompanied by really bad pop music with hoards of delusionals with arms raised being lightning rods for the spirit.

Respectfully Ben I must disagree with your sanguine assessment of the significance of the erasure of the word ‘Arts’. Would you say the same thing if the words ‘environment’ or ‘education’ were similarly erased from their newly merged super-departments with Agriculture and Employment (the mergers are already ominous enough). Language matters. As Goering said: ‘When I hear the word ‘culture’ I reach for my revolver.’ This Government has long sought to silence art, first by starving it of funding, and now by pretending it doesn’t exist.

This Federal Govt if nothing else, has been consistent in its incremental dismantling of democratic freedoms. They fear freedoms of disorder, change and a public right to disagree. They sense the power within Art to appeal and lead. But most of all they fear Art’s strength and capacity to “communicate.” So they will inhibit.

Art exposes that which is hidden.
Art is a freedom of the soul to contest.
Art challenges boundaries within the self to empower those seeking the light.
Art is the repository of an elixir that feeds upon repression.

This announcement was framed as an efficiency measure to help deliver services. Morrison is digging more deeply into the bunker of neoliberalism that constructs citizens as fundamentally self-interested, and therefore with little interest in humanitarian concerns, shared stories or even national identity.

How the arts responds to this is critical. It would be dangerous to take a line about the protection of creative freedom. For non-artists, this can sound like entitlement. Why should we pay for your creative freedom? It’s crude and ill-informed, that that’s the new ecology of Western democracies dominated by retail kitchen politics.

It has to be about stories that connect us to each other. That’s what is missing in glib utterances of the “How good is…?” type. Though it will not doubt infuriate some, arts must be in service of something greater than itself. We need artists more than ever. This could be the wake up call we need.