Why did Nine dedicate a front page to Jenny Morrison’s fashion sense?

Nine pushed Jenny Morrison's status as an 'unlikely fashion influencer', but it seems there might be more to the story.

Following what was arguably Scott Morrison’s worst ever week as prime minister, it was charitable of Nine to dedicate roughly one third of The Sun-Herald’s front page to first lady Jenny Morrison’s fashion choices.

Filled with praise for “natural and authentic” decisions such as wearing the same outfit twice, the story — from journalist Annie Brown — claims Jenny’s fondness of labels Ginger & Smart and Carla Zampatti at diplomatic events has helped ship dresses. G&S co-founder Genevieve Smart and Zampatti both had glowing words for Morrison.

But is there something more to the story? As #watergate community journalist Ronni Salt discovered, the two featured brands share something more than just appearing at G7 summits and meetings with the Queen: they’re both repped by fashion PR agent Adam Worling, the director of Sydney-based agency AWPR. Worling, as Salt notes, also helped out Brown for a quote a few years back. 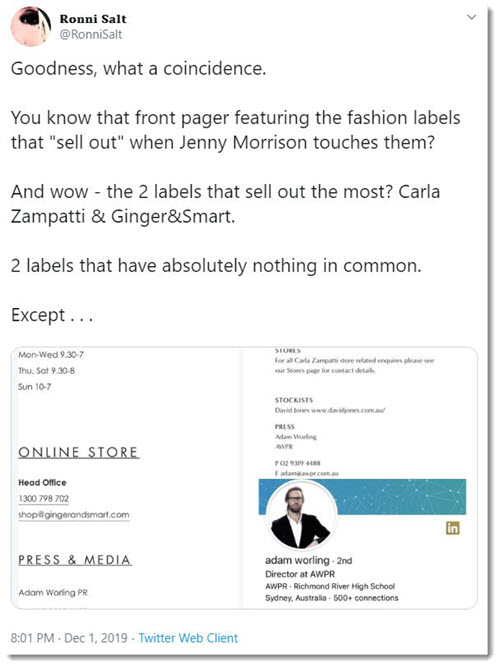 It’s unclear whether the Nine story involved Worling — neither the agent nor Brown had returned Crikey’s calls by press time, and other outlets like The Australian have done similar puff pieces in the past. Neither would there be anything untoward about him helping with the piece.

But Nine’s choice to splash the story across the front page of a major metro paper amid devastating fires and just days after the PM’s Angus Taylor/Ensuring Integrity Bill fiascos similarly lacks justification, and raises more than a few questions.

UPDATE: responding to questions from Crikey, Brown said “the story was not pitched to me by Adam Worling or his PR company”, but they provided contact details for the brands when she asked.

“A comment in passing about the clothes Jenny Morrison was wearing selling out came about during a regular catch up with Adam, one of my fashion contacts. I thought that would make a good story and followed up,” Brown said.

“He did not mention Carla Zampatti — I knew Mrs Morrison had worn Carla Zampatti on her recent overseas trip and decided to contact her myself … In terms of timing, the story happened to come up this weekend because that is when I could do it. I had hoped to file it last weekend but couldn’t because I was sick.”

Fashism: natty dressing and a history of violence

Had the pleasure of watching Hilary and Chelsea Clinton on Graham Norton last night – they were talking about the attacks on Chelsea by the trolls when she was just 11. As Hillary said it says more about the person making the attack on the victim. It is the same on today’s social media. The vicious rubbish by the trolls attacking a woman for admitting she wore the same dress twice is just horrendous. Nobody comments on what the men wear!

Morrison using his wife as a distraction. Charming, such class.

and no other politician does that!

I must admit I was astonished but assumed it was the Channel 9 influence as it probably would not have happened in Fairfax days.
Sad

Am I to infer from paras 2 and 3 that the outfit Jenny Morrison wore to meet the Queen was either a G&S (not Gilbert and Sullivan, in this case) or a Zampatti? My guess would have been that it was from Best and Less – it looked terrible.

I do think there are much bigger issues than what a woman wears. I thought we were passed those horrible Cheryl Kernot comments many years ago. Jenny Morrison seems to be a good role model for most Aussie mums – as are the wives of many politicians from all sides.

Yes, heaven help us if she is to become a fashion “influencer “!

She’s certainly no Julie Bishop with her dress sense. Members of the Liberal Party do run Nine.

Have to agree. How can they possibly call that fashion “sense”?

I agree with you MJM, these outfits make her look 20 years older than she actually is, the grandma look may work if your at that stage in life, but on the whole it doesn’t work for any other female age group, (that green top that features on the front page is just horrendous, it does her no favours whatsoever)…
Keeping in mind that Scotty has aged so much since he’s been in power, (how long is that) he’s 5 years younger & looks 20 years older than I do (without the benefit of all the meds I was on too achieve this) he shouldn’t look as old as he does, but maybe they don’t want to put Jenny in age appropriate outfits, less it creates a mismatch (with hubby) it’s not a good look, it also suggests the hair loss & the increase in girth, he’s not doing as well as you would expect him to, especially after last weeks lunacy…