The Reserve Bank has suggested monetary policy has done most of what it can for a stagnating economy — and that it's time for the government to step up.

The great Morrison stagnation is deepening — and it looks increasingly like the Reserve Bank, despite its own gloom about the economy, is reluctant to take further action to fix it.

Yesterday’s capital expenditure figures for the September quarter showed another fall, the third in a row, in business investment, with expenditure declining 0.2% in the quarter and 1.3% in the year to September, seasonally adjusted. Mining is the only area showing significant growth.

Earlier in the week, construction figures for the September quarter showed total construction falling 0.4%, bringing the fall in the 12 months to September to 7%. Residential building led the way with a 3.1% fall, seasonally adjusted.

That bodes ill for next Wednesday’s national accounts for the September quarter. Economists are already forecasting that weak retail sales, construction and investment data will wipe 0.7 percentage points off the result.

Which brings us to an unusual one-two strike by the Reserve Bank this week to signal its view of the economy and what needs to be done about it.

Reserve Bank spots a lift in the economy — in the 2020s

Deputy governor Guy Debelle went first on Tuesday morning, discussing employment and wages. The huge jobs growth of the last couple of years hasn’t been enough to make a dent in the unemployment rate, Debelle said, because participation — primarily of female and older workers — has increased more than anyone expected. One remarkable graph he used showed a near-vertical surge in the participation rate of female workers aged over 55.

This, and other factors like data from new enterprise bargaining agreements, was all in support of Debelle’s explanation of why wages were not going to rise any faster for the foreseeable future. “There is growing evidence to suggest that wage adjustments of two point something per cent have now become the norm in Australia, rather than the 3-4% wage increases that were the norm prior to 2012 … This supports the case that lower wage rises have become the new normal.”

That’s bad news for household spending and consumption (the biggest driver of growth in the economy) and especially retailing where growth is already sliding and jobs are being lost.

Governor Philip Lowe’s speech on Tuesday evening was highly anticipated as a guide to the Reserve Bank’s thinking on the possibility of quantitative easing (QE). It’s worth noting how extraordinary that last sentence would have seemed a year ago, when the RBA was predicting strong economic growth and indicating that the next movement in interest rates was going to be up to 1.75%. Now the cash rate is 0.75% and there’s still an expectation that the bank will go lower, if not in December then early next year.

Still, Lowe thought QE was unlikely, saying “the threshold for undertaking QE in Australia has not been reached, and I don’t expect it to be reached in the near future.” In Lowe’s view, the bank wouldn’t consider QE until the cash rate fell to 0.25%, at which point, “the interest rate paid on surplus balances at the Reserve Bank would already be at zero given the corridor system we operate. So from that perspective, we would, at that point, be dealing with zero interest rates.”

But Lowe then poured cold water on rates falling further. “Given the significant reductions in interest rates over the past six months and the long and variable lags, the board has seen it as appropriate to hold the cash rate steady as it assesses the growth momentum both here and elsewhere around the world.” 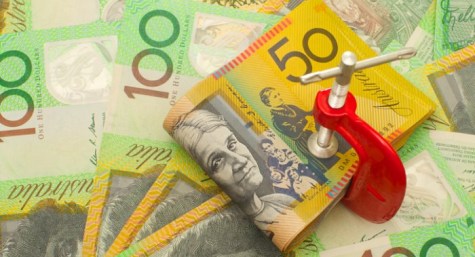 Lowe does expect growth to eventually pick up again — albeit “only gradually”. The bank “recognises the benefits that would come from faster progress, but it also recognises the limitations of monetary policy”. (Emphasis added.)

In that context, Lowe is wary of further rate cuts undermining growth. “Some analysts now talk about the ‘reversal interest rate’ – that is, the interest rate at which lower rates become contractionary, rather than expansionary,” although he also noted that “we are still a fair way from it”, which suggests that issue won’t be an impediment if the RBA decided economic conditions warrant another cut.

What would provide further stimulus if not QE? “The use of structural and fiscal policies will sometimes be the better approach [than QE],” the governor said. Indeed, “the willingness of a central bank to use its full range of policy instruments might create an inaction bias by other policymakers, either the prudential regulators or the fiscal authorities. If this were the case, it could lead to an over-reliance on monetary policy”.

Of course, the government already has an inaction bias. Its only spending lately has been the bring-forward of a small amount of infrastructure spending that will do little to offset the decline in construction, and an (entirely appropriate, if too small) increase in spending on home care packages, thus pumping still more money into the only booming sector in the economy, health and social care.

There was a three year period of no rate movements from August 2016 to June this year. It’s quite possible the RBA could sit on rates that long again, deep into 2022, waiting for growth to pick up — or the government to get its backside into gear.

What should the government be doing to address our stagnating economy? Send your thoughts to boss@crikey.com.au. Please include your full name to be considered for publication.

People can either save and pay off debt or they can spend. They can’t do both at the same time. For years they’ve been spending by racking up debt and the mood about this has changed.

Also for many people low interest rates don’t apply to them. Recent issues of extortionate interest rates for credit cards, payday lenders and unregulated business loans are prime examples and probably the tip of the iceberg. Meanwhile many retirees refuse to realise retirement is a long term game and insist on short term investment thinking with term deposits.

All my life the poor and regular workers are blamed for our financial woes because of wage and welfare demands. All the actual crises have been caused by excessive credit and fraud. There’s little sign the well meaning Reserve get this so I doubt they’ll have good ideas to offer.

Increase Newstart, every dollar will be ploughed back into the economy. It’s that simple.

The RBA are as bad the as the LNP Govt – both have mismanaged the economy for nearly 20 years now.

The record of the RBA is a joke. 2 mining bubbles, 3 housing bubbles, 2 dollar bubbles. And the net result of all that, can be seen today in the Australia economy – as it staggers from bubble to bubble year after year. And only has not imploded because of the last gasps of the Great Chinese Expansion.

The reality is the RBA screwed up the economy big time after the initial flurry of success with the GFC response and have been blaming everyone but themselves since.

As the highest paid central banker on the planet the RBA Gov has plenty to answer for – but BK like Gittins, Pascoe and the rest of the RBA Cultists – will continue to give the Gov a free pass.

The RBA and the current crop of politicians just don’t get it . The current system of reducing interest rates to almost zero is not working. This whole mess was created by the shonks and grifters who created the GFC and managed to convince politicians to print money instead of throwing the whole lot of them ito prison and throwing away the keys. This gives the great unwashed the vision that they are better off because they can borrow more and more money because interest rates are so low. The power of unions has been greatly reduced by the actions of a number of Governments since and including Hawke and Keating and of course the unflushable Howard with the result that wage rises for workers have not kept pace with prices of property and other costs of living. One way of overcoming the current problem would be for an immediate boost to wages for all persons earning less than $60000 per annum . I am sure the naysayers will throw up their hands in horror but similar actions have been taken in the past and the world didn’t come to an end.

“Some analysts now talk about the ‘reversal interest rate’ – that is, the interest rate at which lower rates become contractionary, rather than expansionary,” although he also noted that “we are still a fair way from it”

We aren’t far away from it at all, we are already there.

I agree with others, the RBA have got a poor record (it was Treasury and gov’t action that got us through the GFC)