Christian Porter has again succeeded in delaying the trial of Bernard Collaery — but, absurdly, his barrister claims he's not responsible for any delays.

In a remarkable act of blatant denialism, Attorney-General Christian Porter’s lawyer in the prosecution of Bernard Collaery has tried to deny he is delaying the trial during his own application to delay the trial.

With both the Director of Public Prosecutions and Collaery and his legal team ready to roll for long-scheduled trial hearings on December 11 — in a case that was launched more than eighteen months ago — Porter’s lawyer Tim Begbie yesterday successfully sought last-minute orders from the ACT Supreme Court to delay the next hearings of the prosecution in relation to the revelation of Australia’s illegal bugging of the Timor-Leste cabinet.

The basis of his claim was that the extent of the material provided by Collaery’s legal team objecting to Porter’s attempt to keep the trial secret necessitated a longer period to be addressed.

The material provided by Collaery’s lawyers — despite Begbie’s claim that it was “significant and wide ranging” — is predictable and straightforward: it argues the trial should be conducted in public and contains affidavits from security and foreign policy experts that explain why the secrecy request should be rejected.

Justice David Mossop professed some scepticism about Porter’s application. After Begbie complained that an affidavit from Collaery’s solicitor was 136 pages long, Mossop noted that the affidavit “just [shows] the extent of what is publicly known”.

The judge professed more scepticism after the DPP’s barrister refused to support Porter’s application to delay the trial. The barrister told the court via videolink that the DPP would prefer to retain the December 11-13 hearings, which will focus on the secrecy request.

And it was at this point that Begbie made his astonishing claim. Mossop pointed out that delaying the trial was damaging Collaery’s legal practice. No it wasn’t, Begbie replied — it was the prosecution per se that was harming Collaery’s ability to practice law and maintain his client list.

“But if he can’t figure out the ground rules, then that affects his practice,” the justice replied. Begbie responded:

We’re not substantively involved, it’s the prosecution that does the trial.

This is a remarkable denial by Porter’s barrister. It has been Porter, via Tim Begbie and his legal team, that has frustrated the trial by trying to impose secrecy restrictions, prevent Collaery from briefing his own lawyers in the name of national security, and introduce documents that would allegedly demonstrate the case against Collaery but which Collaery and his lawyers could never see.

It was Porter and Begbie who were rebuked by magistrate Lorraine Walker back in February when she told Begbie and the Commonwealth to “pull their fingers out” on their refusal to allow Collaery to brief his lawyers. It was Begbie who assured Walker that that matter would be resolved in “weeks rather than months”, only for nearly six months to pass before anything was done. It was Porter and Begbie who yesterday sought to delay the trial against the wishes of the DPP.

Yet there was Begbie claiming not to be “substantially involved” and that it was the fault of the prosecutor, who had opposed delaying the proceedings.

It’s understandable that Porter wants to deny his role in trying to delay the trial. He has done so at every turn as part of a strategy to financially harm Collaery and grind down Witness K to the point where he felt compelled to plead guilty, or spend much of his remaining years in litigation.

As it turned out, Mossop this morning reluctantly accepted Begbie’s request, despite the waste of court resources and the impact on the fairness of the trial. December 11-13 will now be used to “focus on and disclose” the parties’ intentions, with the aim of progressing matters more efficiently, with Mossop flagging any future requests for changes will be frowned on and that he expects dates will be adhered to.

Porter may have won his last application to slow things down, but the first hearings on the secrecy request, now scheduled for four to five days instead of three, won’t be heard until 2020; the trial proper itself now pushed further back — which is exactly what Porter wants.

So much for the “model litigant” requirements of the Commonwealth — the very first of which is “dealing with claims promptly and not causing unnecessary delay in the handling of claims and litigation”. The Collaery prosecution has been a litany of unnecessary delays — not by the DPP, but by the so-called first law officer of the land, the attorney-General.

And yet Porter’s lawyer has the hide to claim he isn’t “substantially involved” and that it’s all the fault of the DPP. There was always a Kafkaesque character to Porter’s efforts to jail Collaery and K using documents they wouldn’t be allowed to see. Now it’s tipped over into blatant absurdity. 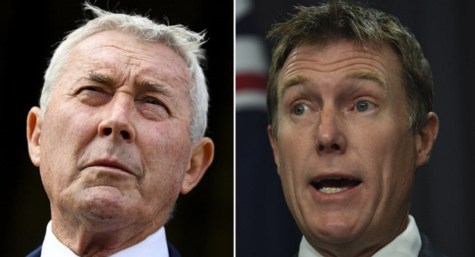 Who else would love to see the very un-christian Porter suffering under the same sorts of misery he gleefully inflicts on others….what a piece of scum he is.

Indeed, Fairmind…Porter is just like the rest of them in that putrid government. A dictator…arrogant, sleazy and thinks he can get away with anything. His day will come!!

Yeh, but what odds a “federal ICAC” – especially under a mob with so much to loose from the institution of such a body?
When a “Federal Unallied Commission Into Trangressions(?)” could look at the original act of buggery itself …….

This case is such a huge stain on Australia. Secret trials and star chambers convicting people of who know what were abolished centuries ago in our legal system.
Having opposed Justice Mossop years ago when he was a young barrister and again in front of him when he was a magistrate I expect he will be well do his best to apply ethical justice to the matter to the extent allowed by seriously evil federal legislation and what appears equally evil and unethical Executive legal tactics.

This case is such a huge stain on Australia. Secret trials and star chambers convicting people of who know what were abolished centuries ago in our legal system.
Having opposed Justice Mossop years ago when he was a young barrister and again in front of him when he was a magistrate I expect he will be well do his best to apply ethical justice to the matter to the extent allowed by seriously evil federal legislation and what appears equally evil and unethical Executive legal tactics.

They must see the risk – reward odds differently to me. Somehow this case hasn’t blown up into a major scandal but there’s still time. The obvious thing to do was to stop K and Collaery testifying overseas, do some sort of deal with Collaery and let the case die down.

To keep raising the stakes by pushing for secret trials and secret evidence beggars belief. The case is about an illegal bugging of a notional ally to gain a private company’s commercial advantage. There’s nothing security related about it at all.

Even if it goes to plan and both are convicted Collaery has made it clear he’ll tell all when the time is right. And that time will likely be of his choosing. He’s been tainted into a mindset where he feels he has little to gain but nothing to lose. If there’s a point, even pure bastardry, I can’t see it.

“do some sort of deal with Collaery and let the case die down.”

Doubt that Collaery would ever have involved himself in any deal. He has too much integrity* to horse-trade over any case involving Timor Leste and Australia’s disgraceful conduct towards that nation.

* I appreciate that integrity is not part of this government’s thinking on any topic and that the A-G would not recognise it if it bit him.

Been Around
Reply to  mark e smith

I agree that Porter is such an idiot that he has definitely picked a fight with the wrong ‘victim’. Colleary will get this talentless buffoon in the end.

Porter completes his metamorphosis into a cockroach.