Good morning, early birds. A Chinese espionage ring allegedly tried to bankroll their pick for MP, and Treasurer Josh Frydenberg has hinted some Westpac executives may be sacked. It's the news you need to know, with Rachel Withers.

ASIO has confirmed that Chinese spy claims are being “taken seriously”, after it was reported that China may have tried to plant an agent for Beijing in the Australian parliament.

An explosive 60 Minutes report claims a Chinese espionage ring tried to install Liberal Party member and Melbourne car dealer Bo “Nick” Zhao in an eastern suburbs seat, offering a million dollars to pay for the campaign. Zhao disclosed the alleged approach to ASIO about a year ago, according to sources, and was later found dead in a Melbourne motel room. ASIO director-general of security Mike Burgess issued an “extraordinary” statement Sunday night entitled “Foreign interference”, revealing the agency was already “actively investigating” the claims.

Westpac has put executive bonuses on hold until it gets to the bottom of its money laundering scandal, while Treasurer Josh Frydenberg has hinted the board could be sacked, the ABC reports.

In a statement released on Sunday, the bank said it was investigating who was at fault, revealing it has frozen bonus payments for its entire executive team and several members of general management. It also promised to axe products linked to illegal payments and invest in new programs to fight child pornography, but stopped short of promising to sack executives found responsible. The Australian Prudential Regulation Authority is also investigating Westpac’s actions, with Frydenberg saying the regulator has the power to sack those found to have done the wrong thing.

HE SAID, SHE SAID

Influential Liberal MP Andrew Hastie is urging the government to grant defecting Chinese spy Wang “William” Liqiang political asylum, after he became the first Chinese operative to ever blow their cover, taking an information trove to ASIO.  The Chinese embassy in Canberra on Sunday hit back at Wang’s claims, saying the “self-proclaimed agent” is a convicted fraudster, the ABC reports.

Meanwhile, a new cache of Communist Party documents — dubbed “The China Cables” — have been leaked to the media, providing a major look into the internal workings of the internment camps used to detain at least a million of the nation’s Muslim minorities. The documents, published on Sunday, have been independently assessed by experts who have concluded they are authentic, while China claims they are “fabricated”.

I have meetings organised with unions. I think it was not very good of the government to actually release the amendments late Friday afternoon.

The One Nation leader is mad at the government for releasing her Ensuring Integrity amendments ahead of a big week, and is still withholding her support — for now ($).

World heritage: Queensland rainforest burned for 10 days – and almost no one noticed 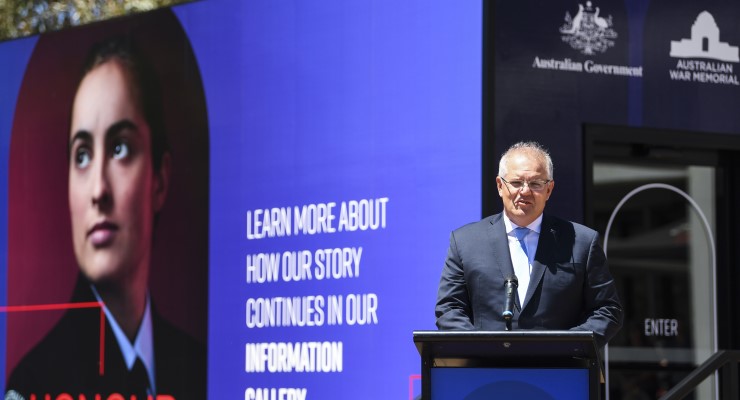 “Will the new building actually address a ‘key contributor’ to PTSD among veterans? The academic literature on PTSD strongly emphasises proximity to, and the trauma of, combat, length of deployment, rank, socio-economic status and, unsurprisingly, pre-existing mental health problems as key contributors to veteran PTSD. In fact, the bulk of factors that have been linked in academic research to veteran PTSD are pre- or peri-trauma, rather than post-trauma (even genetics plays a role). Of post-trauma factors, according to one study ‘a positive recovery environment after trauma exposure may serve as a protective factor’, but the evidence was less consistent than for other factors.”

“In over-arching terms, what AUSTRAC says Westpac did between 2013 and 2018, to comply with its anti-money laundering compliance obligations, was four-fifths of fuck all. The bank set up numerous arrangements with overseas correspondent banks to facilitate the cheap and easy transfer of funds, for the convenience of each bank and its customers. It allegedly paid nothing more than lip service to the law which was designed to combat money laundering, knowing what money laundering facilitates: terrorism, organised crime and human trafficking.”

“In both speeches, Rinehart contradicted herself by referring to the country’s ‘abundant sunshine and water’ and the ‘unnecessary shortage of good water,’ while also bemoaning the ‘record drought,’ ‘massive drought’ and farmers who have ‘battled with droughts’. She made no mention of the death of 46 protected freshwater sawfish on her property due to low water levels earlier this year, the clearing of 28 hectares of wetlands for a coal terminal by the Great Barrier Reef marine park, or her company’s plan to tap into the Fitzroy River, a plan environment groups say would lead to a ‘Murray-Darling style disaster’. ‘Imagine what we could do in our industry, with tax and government tape cuts, more water, and having more say on where our own hard-earned money is invested,’ she said. Just imagine.”

Centrism is a dead weight in Australian politics – and it’s dragging us all down – Greg Jericho (The Guardian): “Not all extremism is equal and no force of social or economic change happened due to people refusing to make waves. It happened because people were prepared to go to prison, be attacked, and seek to disrupt those who would go about their lives ignoring the issue. Centrists love the final vote that sees change occur – where politicians from both sides sit together and agree; they care only in retrospect for the work, suffering and effort over decades that leads to that change. And they ignore that throughout those decades, the powerful in the media and politics actively prevented change occurring by spending more time calling for calm and reason than noting reality. And so long as powerful journalists believe that arguments are worthy purely because they call for a middle ground, then ever will they be a force that prevents effective action on climate change.”

Newspoll: Polling changes with the aim of getting it right ($) – Campbell White (The Australian): “We’ll also be committing ourselves to greater transparency in polling. YouGov has called for the establishment of an Australian Polling Council that is the appropriate vehicle for the industry to set standards for disclosure and appropriate reporting. We are ­inviting other polling companies and other stakeholders to join us in establishing this important innovation. We realise that many Australians were understandably disappointed in the accuracy of polling at the May election. Newspoll has a proud legacy and we are committed to modernising and improving how it is conducted to ensure that it remains the poll Australian decision-makers rely upon.”

Under fire from the new fascism ($) – Jeff Sparrow (The Saturday Paper): “Immediately after the massacre, the New Zealand government, and much of the progressive media, vowed to prevent the glamorisation of the crime. Jacinda Ardern pledged never to say the killer’s name. New Zealand’s chief censor banned the perpetrator’s manifesto and video; the local press signed a voluntary agreement to limit the coverage of his trial. All of this was understandable. Yet the perpetrator did not seek mainstream notoriety. He staged his atrocity to appeal to a particular cohort of online fascists, a tech-savvy group who can easily evade online censorship. In seeking to avoid giving the killer publicity, the media risks obscuring the real nature of his project, presenting Christchurch as an inexplicable act of depravity rather than a deliberate political strategy. And that matters.”