Good morning, early birds. DFAT documents reveal increasing concern about the health of democracy in the Indo-Pacific region and encourage the government to take action, and firefighters continue to battle record blazes. It's the news you need to know, with Rachel Withers.

Australia is facing “the most consequential changes in the global environment since WWII”, DFAT warns, with “populism, nationalism and authoritarianism” disrupting the global system.

Internal briefing documents, prepared for Minister for Foreign Affairs Marise Payne and Minister for Trade Simon Birmingham, reveal concerns regarding the rise of China, “increasing illiberalism” and “democratic backsliding”. The papers — released to Nine under Freedom of Information laws, 80% redacted — argue for increased assistance in the Indo-Pacific, suggesting the need to “limit coercive power”. Hong Kong, meanwhile, is on the “brink of total breakdown”, police have warned, following a day of “unprecedented violence”.

A number of bushfires are still burning at an emergency level, with crews battling blazes through the night and the army expected to be deployed to assist in the firefighting.

The “biggest firefront in the ­nation’s history” ($) has burnt out a million hectares of land, with NSW’s north coast copping the brunt of it ($). Firefighters fought 300 new fires on Tuesday, with early estimates that up to a dozen homes have been damaged or destroyed. The firefighting chief has warned that the worst is yet to come, with an intense dry spell across Australia set to persist into summer.

For the latest updates on the bushfires, visit the NSW RFS and Qld RFS websites.

A suicide prevention summit will be held in Canberra today, bringing together mental health experts, bureaucrats and community leaders to help develop the government’s Towards Zero strategy, Nine reports.

National Mental Health Commission chief Christine Morgan, who was appointed by the prime minister to lead the strategy, says the forum will look to form connections in the delivery of services, as well as “seek and test” best practices from around the world. Morgan tells The Guardian that discrimination is the biggest barrier to suicide prevention, saying she has been shocked by the level of stigma — personal, societal and structural — that Australians face upon revealing they have attempted self-harm.

I acknowledge that the two people who died were most likely people who voted for the Green party.

Afghanistan: Taliban prisoners released in bid to free Australian and US kidnap victims 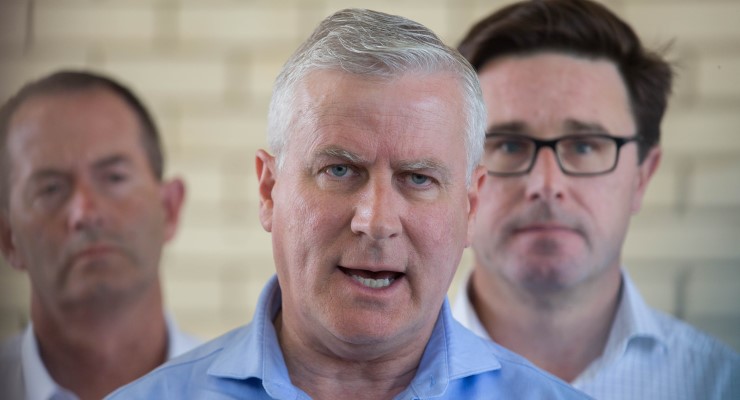 “Why have Nationals MPs refused to shift with their own base to accept climate change exists and the need to address it? The answer lies in the reason the Nationals exist at all. They are unique in Australian politics in rejecting the idea of any kind of national interest as their raison d’être, instead existing purely to manipulate the democratic system to deliver rewards to a sectional interest, agricultural communities and, to a lesser extent, regional communities more broadly. National policy challenges — let alone international ones — are outside the Nationals’ remit; if it can’t be monetised into funding that can be handed to farmers then it doesn’t exist.”

“A former journalist for the West told Crikey the paper’s approach was heavy-handed. ‘The sheer level of pushback that the West did really early on was really extraordinary,’ they said. ‘Most of the people knew what the view would be … a lot didn’t want anything to do with it. Kerry Stokes was feral in defence of Roberts-Smith.’ But it’s no surprise the rhetoric took this turn — Seven West media boss Stokes is deeply interested in the Australian military. He’s bought medal sets of war heroes and is the chairman of the Australian War Memorial Council. Stokes works alongside former defense minister Brendan Nelson at the War Memorial, while former West editor Bob Cronin is on the board of Bravery Trust, a charity for veterans.”

What right does Gable Tostee have to protect his reputation?

“The point is that a search for the correct answer here is necessarily doomed. Whether viewed from the perspective of a victim of alleged wrongdoing, the alleged perpetrator of the alleged wrong, the hopefully impartial media trying to report something newsworthy, or bystanders who are seeking to extend a protective arc over future victims by sharing knowledge or suspicions of risk derived from what’s already transpired, it isn’t possible in any particular case to nail down with certainty which rights of which people should stand highest. What can be said is that, in Australia, the balance is not appropriately set. It favours reputation over speech and, more damagingly, over the right of a victim to be heard.”

‘This is our new normal’: Regional mayors on bushfires and climate change – MidCoast Council deputy mayor Claire Pontin (The Guardian): “Up on the New South Wales mid-north coast, we don’t have many inner-city greenies. What we do have is a community that’s battling the worst fire conditions we’ve ever seen, and looking down the barrel of what might be the hardest week we’ve had to face. As our magnificent fire service works hard to contain the blazes threatening local lives and properties, it is galling to hear the deputy prime minister condemning anyone who draws the link between bushfires and climate change. Frankly, he’s pretty out of touch with how many people in my community are feeling right now.”

Prayers aren’t enough Prime Minister – Shiann Broderick (The Age/Sydney Morning Herald): “Australia is on fire. The federal government must take urgent action on climate change. Scientists and firefighters have been warning about the consequences of doing nothing for so long. Surely now, with multiple fires burning throughout NSW and Queensland, Scott Morrison must realise that doing nothing is not an option any longer. I’m heartbroken at what’s happened but I’m also angry. I’m angry that the government is not adequately addressing the climate crisis. We thank you for your thoughts and prayers Prime Minister, but we need action.”

After the fires, we’ll have combustive issues to resolve ($) – Paul Kelly (The Australian): “The Greens exist for the polit­ics of climate change, so manipul­ating the destruction of lives and property in this cause is no surprise. It is their core business and belief set. If people find it loathsome, the Greens will live with that. They ride an existential movement — the global lurch to extreme climate policy from the Green New Deal in the US to the Extinction Rebellion protesters in the cities of the West. The spat between senior Greens Richard Di Natale and Adam Bandt on one hand and Nationals leaders Michael McCormack and John Barilaro on the other is part of the battle for the political soul of regional Australia and how the nation should respond to the changing climate. This is about politics, not science. The science is used as a political weapon.”

Those believing that we may differ in our opinions but that’s a right we are both afforded in this country, or that we have a just rule of law, may wish to qualify such naïve assertions.
Someone of Arab lineage who merely has an opinion supporting jihad in Syria can have their passport cancelled without explanation or redress, never mind that the U.S. and Australia both support some such groups. A lawyer acting as such for another country in accordance with the law can enjoy an ASIO raid that makes sure to take all the defence evidence, then face the same charges as their client simply because they are acting for them. People guilty of terrorism offences may be indefinitely detained after completing their sentence for the appalling reason that the lockups are cheaper than monitoring. Dutton wanted and still wants cancellation of citizenship by Ministerial decree, and as the Fiji/Prakash citizenship blunder shows, doesn’t care whether they in fact have the dual nationality that allows one to be stripped.

Some six dozen evil and oppressive laws have been passed by the Commonwealth since 2001, all with Labor class traitor support, all aimed at suppressing our freedoms in the name of suppressing virtually non-existent non-western terrorism in Australia. Appeal, even basic accountability, is equally rigorously denied.

Why travel to find a brutal, evil, repressive Misgovernment when we can make do quite well with the local version?