Have emissions really fallen since 2005?

Liberal backbencher Katie Allen claims that emissions in Australia have fallen since 2005, and that they're the lowest they've ever been. Is she correct?

Greenhouse gas emissions, and whether they are going up or down, is once more at the centre of debate.

Liberal MP Katie Allen entered the fray when she told ABC TV that the Coalition government had “done a great job” reducing emissions.

Allen was immediately accused of lying by Labor’s Pat Conroy, who said she was “factually wrong” because emissions had, he claimed, risen every year since 2014.

“They have fallen since 2005,” she said in response. “They are the lowest they have ever been.”

Is Allen correct in claiming emissions have fallen since 2005, and that they are the lowest they have ever been? RMIT ABC Fact Check investigates.

In the year to June 2005, Australia’s total greenhouse gas emissions were 610.6 million tonnes of carbon dioxide-equivalent, according to the latest government data available. (The Australian government uses financial years when reporting emissions under its international agreements).

Since then, annual emissions have fluctuated, reaching 537.8 million tonnes in the year to June 2018 (the latest comparable full year).

By the March quarter of 2019, annual emissions had risen to 538.9 million tonnes.

While emissions are now lower than they were in 2005, they are nonetheless at their highest annual rate since the year to June 2012.

Australia’s most authoritative database of greenhouse gas emissions dates back as far as 1990, the base year for Kyoto Protocol calculations.

It shows that in 2017 financial year, the latest full year for which data is available, net carbon dioxide-equivalent emissions stood at 530.8 million tonnes (530,840.90 giga-grams, as measured in the database).

Emissions can be measured in different ways: for example, as total emissions or emissions per capita or per GDP, but Allen did not specify to which measure she was referring during her TV appearance.

When Conroy, the Opposition’s spokesman for international development and the Pacific, accused her of lying, she replied: “They have fallen since 2005. In the last quarter they’re 0.6, that’s true.”

It is not clear what this figure represented.

However, Fact Check notes that the latest official data shows there was a 0.6% increase in Australia’s total greenhouse gas emissions over the year to March 2019.

When invited to provide the basis for her claims regarding emissions, Allen told Fact Check she had been referring to emissions as measured per capita — a point she did not make during the TV interview.

“[Per capita] was what I was thinking about,” she said. “I was not clear in my [TV] discussion.”

As Australia’s progress in cutting emissions under its international obligations (the Paris Agreement) is measured by changes in total emissions rather than by other measures, Fact Check considers it reasonable that viewers would have assumed Allen was referring to Australia’s total emissions — not emissions per capita.

The Australian Department of the Environment and Energy collects and publishes a series of reports and databases, known as the National Greenhouse Accounts.

Quarterly reports, released as part of the accounts, track total emissions as well as emissions by sector, per capita and per GDP.

The latest quarterly report provides estimates of Australia’s national inventory of greenhouse gas emissions up to the March quarter of 2019.

Have emissions fallen since 2005? 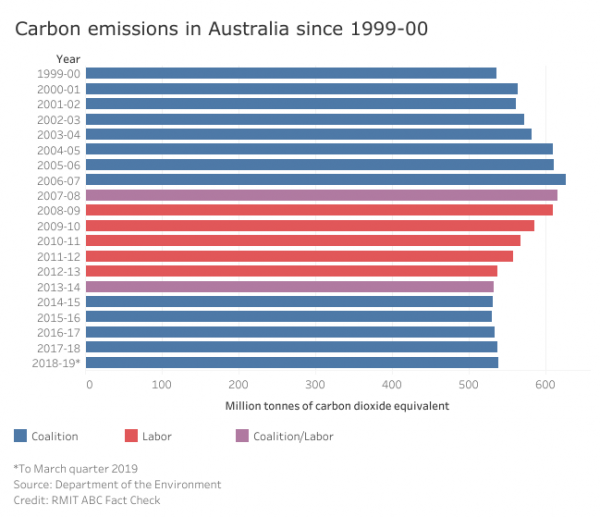 In the 2018 financial year, the latest full year for which data is available, emissions stood at 537.8 million tonnes of carbon dioxide-equivalent.

So, while emissions are now lower than they were in 2005, they are nonetheless at their highest annual rate since the year to June 2012.

Even taking into account the latest time period for which emissions data is available (the year to March 2019, when emissions were 538.9 million tonnes of carbon dioxide-equivalent), they are still running at the highest annual rate since the year to June 2012.

Pep Canadell, a senior principal research scientist in the CSIRO Climate Science Centre, and the executive director of the Global Carbon Project, told Fact Check that Allen’s claim was misleading.

He said emissions were indeed lower than they were in 2005, “but ‘have’ fallen means they have been falling since then and this is not correct”.

Are emissions at the lowest level they have ever been?

The Australian Greenhouse Emissions Information System (AGIS) forms part of the National Greenhouse Accounts and provides the most authoritative emissions data, according to Hugh Saddler, an honorary associate professor at ANU’s Crawford School of Public Policy.

The database, which goes back to 1990 — the base year for Kyoto Protocol calculations — was based on actual measured data relating to the activities that cause emissions and were not hypothetical, he told Fact Check.

“They are the only figures that are authoritative,” he said.

But due to the time that it takes to collect the data, the 2017 financial year was the latest full year for which data was available, he said. 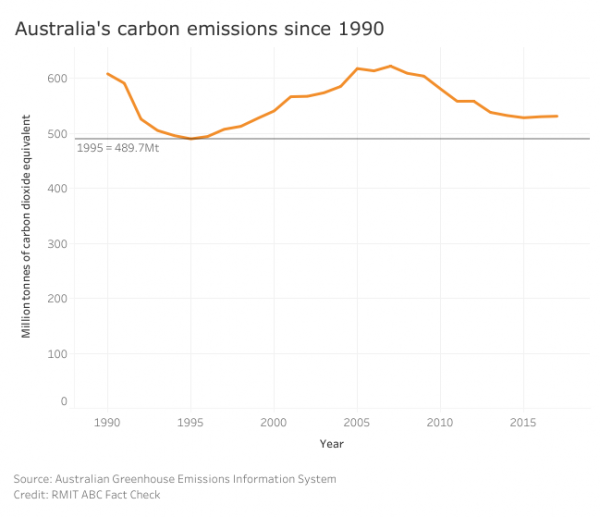 “Fifty or 100 years ago, Australian emissions were a tiny fraction of what they are today,” said Canadell.

“We had a fraction of the population, of energy needs, of mining, you name it.”

Both Karoly and Saddler also rejected the claim that emissions were at their lowest levels ever.

What is the overall picture of emissions based on the latest data?

Over the year to March 2019, Australia’s total greenhouse gas emissions rose 0.6%, or 3.3 million tonnes of carbon dioxide-equivalent (in trend terms), over the previous year, according to the latest quarterly report.

The report attributed the rise mostly to increased LNG exports (up 18.8%).

However, quarterly emissions to March 2019 decreased by 0.1% relative to the previous quarter.

While emissions have fluctuated year on year over the past 10 years, they have been trending upwards since late 2014 — an upturn that coincides with the Abbott government’s removal of the carbon tax introduced by its predecessor, the Gillard government.

Under the Paris Climate Agreement, Australia has committed to a reduction in total greenhouse gas emissions of between 26% and 28% on 2005 levels by 2030.

Others who highlight decreasing emissions

Allen is not alone in claiming emissions in Australia are falling.

Taylor emphasised that emissions in the 2018 September quarter were down 1.4%, while Cassidy said emissions had risen over the previous year (by 0.9%), as they had every financial year since June 2013.

Both were correct, but it’s noteworthy that past fluctuations in quarterly emissions have not led to falls in annual emissions.

Annual emissions measured on a trend basis account for short-term or seasonal fluctuations and provide a measure that allows for comparisons over a longer period of time.

Last year, former Liberal minister Amanda Vanstone also claimed “emissions are coming down” in Australia. Fact Check found her claim to be misleading as emissions had been trending upwards since 2014.

Both Liberal senator Linda Reynolds and then-environment minister Melissa Price also claimed last year that emissions per capita, and per GDP, were at their lowest levels in 28 years, although Price acknowledged total emissions had risen over the year to June 2018.

While neither was wrong in claiming emissions per capita and GDP were the lowest in 28 years, they nonetheless chose to highlight a measure that experts have described as meaningless.

Are emissions per capita a useful measure?

Fact Check posed this question when examining the claim made by Vanstone.

Experts have previously told Fact Check that emissions per capita is a meaningless measurement, since the more significant measure of total emissions is the one used in international agreements.

Saddler noted: “The atmosphere doesn’t care how many people are contributing to emissions; it’s the total quantity of emissions that matters.”

Karoly said emissions per capita was a useful measure when it allowed for country by country comparisons.

“The Australian per capita share at the moment is higher than any other developed country in the world — higher than the US. Yes, it’s coming down, but it is still the highest.”

Both Saddler and Karoly explained that the fall in emissions per capita and GDP were due to rapid population growth in Australia.

Strange behaviour from an MP whose seat has gone from blue ribbon Liberal to marginal largely on the basis of her party’s denialism on climate change. Keep it up Katie, the red flag may wave in Higgins yet.

My wife described a cartoon she saw recently to me.
First panel; Scumo praying ” please God send us some help to deal with the drought and bushfires”.
Second panel; A voice from the clouds, ” I HAVE ALREADY SENT YOU 23000 SCIENTISTS”.
Says it all for me.

‘Misleading’ and ‘Incorrect’…sounds like every other claim that comes out of the mouth of this putrid government. Lies, lies and more lies…they cannot help themselves!
But it is about time the voting public woke up to the fact that the L/NP are a total waste of time and, in some instances, downright dangerous!!

I think the graph says it all. Rising emissions under Liberals, than falling under labor, now rising again under the Libs. Case closed!