No matter what Australian workers do, business demands an ever more comprehensive victory over them.

No one talks about strikes any more. But if you were around in the 1980s, “militant unions” and a culture of industrial disputation were always being hailed as a major problem in the Australia economy. Union power had to be curbed and workers prevented from withdrawing their labour as a tactic in industrial negotiations, we were told incessantly. 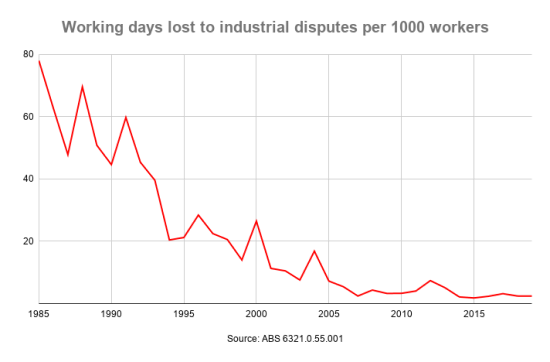 Strikes are now a small fraction what they were just 15 years ago. Even in construction, where the “militant” CFMMEU allegedly runs amok, the days lost on average in 2018-19 was 10.5. That would have been a quiet year when John Howard was prime minister. In mining, another CFMMEU stronghold, no strikes were recorded at all in the first two quarters of 2019. That’s some militancy.

The decline, even death, of strikes in Australia has much to do with the dramatic decline in union membership, from around 50% of the workforce in the 1970s to well under 20% now — a figure propped up by high levels of union membership in the public sector (where, coincidentally or not, health and education workers have enjoyed much better wages growth than elsewhere).

But the right to strike — which doesn’t legally exist in Australia, placing us in breach of international labour conventions — has been curbed by governments and industrial relations regulators that have confected reasons to ban legal industrial action.

The employers and employer groups of the 1980s would be delighted with such an outcome — it represents a total victory over the union movement. So too does the collapse of wages growth over the last five years, a collapse that is forecast by the Reserve Bank to continue well into the 2020s, giving workers a full decade of wages growth barely above inflation. This has enabled employers to refuse to pass on to employees the benefits of higher productivity. As Saul Eslake has pointed out, labour productivity has increased far more rapidly than wages this decade.

The Fair Work industrial relations system — which, when created by Labor, was demonised by the Coalition and business as a kind of pro-union machine of economic destruction — has thus delivered win after win after win for business at the expense of workers.

Except, that’s not how employers see it. For employers, nothing has changed: the industrial relations system is still deeply flawed and they are its victims. Crikey noted that in the wake of the Coalition’s unexpected election win earlier in the year, business radically changed its tune and began demanding industrial relations reform again. But the reaction of business to Woolworth’s wage theft admission illustrates how workers simply can’t win.

As we explained last week, the claim that it is industrial awards complexity that is to blame for wage theft simply doesn’t stack up. But employer groups are persisting with it. Yesterday, AIGroup’s Innes Willox doubled down.

Willox is deeply worried that the federal government might be shamed into acting on wage theft, particularly by criminalising it.

The underlying argument from business is that if there was industrial relations reform to strip awards down to basic matters, the complexity would be eliminated and wage theft would end. Coincidentally, of course, that would remove many protections currently provided for workers in awards. That is, the business response to wage theft is to argue that workers should lose conditions and entitlements.

No matter what Australian workers do, business wants more. Strikes have vanished from the economy, but employers demand more reform. Wages growth has all but vanished as well, but still they want more. Employers literally steal from their workers, and that, too, becomes the pretext for demands for more reform.

Then they wonder why populism and anti-business sentiment are rampant in the community.

Does the Woolworths CEO still have a job?

I note that a woman who stole money ($3.9m) from her employer was jailed this week. Why should it be different for a company and its CEO?

Worker don’t deserve to win. They refuse to join, or even support, unions and they vote in an anti union anti worker Federal government. So perhaps one day the penny will drop and they will join or support unions and they will vote in a Labor Green government, then their conditions may change. Until then Australians get only what they deserve.

Absolutely right on, Paul. I have never understood how the working ‘scabs’ who don’t join unions continue to enjoy the benefits their unionised co-workers pay for. They are just parasites.
Is it true that in the USA, ONLY members of a union benefit from wage rises/conditions that said union wins? I really would like to know if it is, and why the parasites keep getting away with not paying for union work in this country. Makes them little better than the employer wage theft lot!!

That’s bull Paul and CML. Workers deserve a win because they are workers, the lifeblood of the economy, nothing more or less.

That many workers aren’t members of unions might just be down to the fact that most unions stopped representing the workers back in the late 80s. I’ve seen their bastardry to their members close up.

Even a shit Union is better than no Union. After and during the emasculation of unions by the federal governments I noticed many workers were too tight to pay union dues because they received the benefits anyway. Howard achieved most of his desire to neuter unions but then went too far with the dreaded Work choices. The Liberals biggest fear is real full employment.

I’ve often commented here on our almost total suppression of the right to strike.

However the most overlooked factor comparing now to the 70s and 80s is inflation rates. In those decades annual inflation averaged close to 10 percent. Workers had little choice but to continually agitate for pay rises. Employers were as reluctant then as now to grant them.

The end of high inflation is a much under appreciated gift to many people especially the old and marginalised. These people couldn’t agitate to increase their fixed incomes. If they had savings, nominal interest rates were mostly above inflation but after tax you were well behind.

Today we have both a dodgy form of inflation measuring and a fundamental change in price relativities. Big increases in utility and health costs are now the bane of not just the old and marginalised but ordinary families and manufacturing businesses. Housing costs for buyers and renters are now much higher. None of this seems to affect official inflation figures much.

However, less essential stuff like new cars, appliances and myriad consumer stuff are much cheaper supposedly balancing out the inflation number. This is true for many but not the poorest third or so.

We are heading along the same road that has meant workers in the US must have two jobs to survive. Workers at Wall-mart are less protected than workers at Wall-Mart in China. In China all foreign companies must have unions.