Bernie Sanders is inspiring so much hope in his supporters that it feels almost impossible. Could a politician get the same response here in Australia?

Attending Bernie Sanders’ 26,000-strong #Bernie’sBack rally at Queensbridge Park two weeks ago, I had an uneasy yet familiar feeling you only get when observing American politics as a foreigner and a paranoiac: they’re probably going to shoot this guy. I still remember watching Obama’s inauguration through my fingers, waiting for the gun shot to ring out.

It’s a (largely) irrational feeling but one worth interrogating. It isn’t about gun violence, or American violence — that which permeates everything here from the national anthem to the NFL to drone strikes.

This man is inspiring so much hope, and hope feels so antithetical to this American moment as to seem impossible.

The rally marked Bernie’s first major public appearance since his heart attack earlier in the month. “To put it bluntly, I’m back” said Bernie, who came out to AC/DC classic “Back in Black”.

The heart attack was the most divisive talking point amongst the people I spoke to. “If Trump is considered fit, then Bernie is more than fit,” one supporter told me.

“If I could give him my heart, I would” said a young woman anxiously flipping her placard over and over.

But to most supporters, the heart attack was exactly what the doctors said it was: minor. From crushing debt, mad insurance rackets, resurgent fascism, and the Democratic National Convention’s darkly comic mishandling of Trump in 2016, Bernie supporters have more pressing issues on their minds than his health.

“It’s costing me about $50,000 a year to keep my husband alive,” a middle-aged woman tells me. “Can you understand that? Can you comprehend that?” 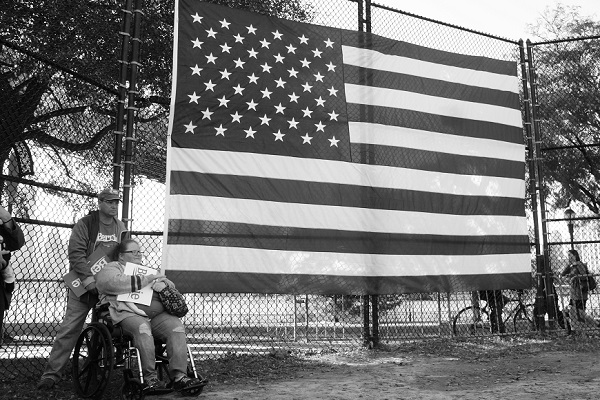 “What Bernie is saying isn’t radical. These ideas shouldn’t be radical. This is about people being able to live their lives.”

Bernie seemed to echo her later, on the stage: “It is not a radical idea to say that all of our people regardless of their income have a right to live long and healthy lives.”

The mainstream media, particularly The New York Times and The Washington Post, have created a narrative around Bernie and his supporters that any journalist who leaves Twitter for a Sanders’ event can immediately see is false. 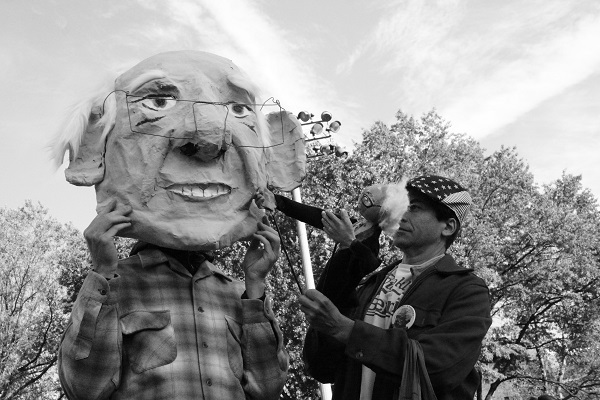 This is not a mass of neckbearded podcasters, dropping the R-word and misquoting Foucault. Were those people there? Sure, but to say they are representative of the movement as a whole is like saying that every Trump supporter drives a car with a confederate flag on it.

It’s a dangerously reductive view of movements which, like it or not, represent a diverse swathe of the American populace.

The only uniformity I witnessed was one of enthusiasm. Here were people – old, young, queer, disabled, black, latinx, everything – who were incredibly engaged with their candidate and his politics. I talked to people who had started unions, run for local office, organized protests, sought knowledge and experience, all spurred on by the wave of inspiration that Bernie set off when he ran in 2016. 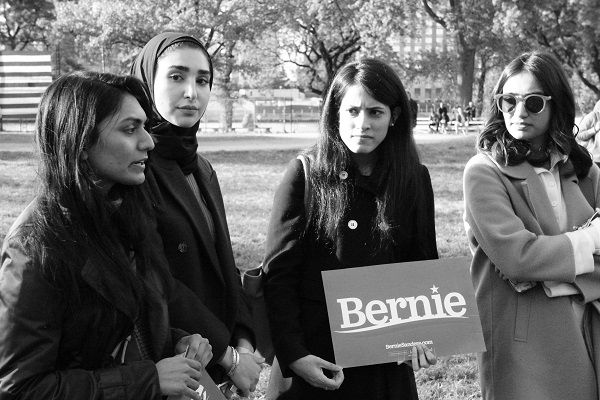 “It wasn’t until I heard of a man by the name of Bernie Sanders,” declared Alexandria Ocasio-Cortez, “that I began to question and assert and recognize the inherent value as a human being that deserves healthcare, housing, education, and a living wage.”

Cortez, who gave a rousing speech before Bernie’s headliner, is a testament to the power of Sanders’ movement. Last year, she was tending bar in Manhattan and being, she has said, underpaid and sexually harassed. Now, she’s a more recognisable political figure than half the Democratic presidential candidates.

Who was the last Australian politician to inspire so many in such a palpably urgent way? Bob Hawke? As the light on the hill grows dimmer and dimmer every time the ALP kowtow to the radical right-wing politics of Morrison, Dutton, and the Murdoch press, it becomes all but impossible to imagine a Bernie succeeding in Australia.

And an AOC type? If a 28-year-old POC tried to stir up such ideals in Australia, she’d be run out of the country. We’ve done it before to people way less radical than her.

Outside the rally was a little cadre of rabid Trump supporters. They waved flags. They chanted. They screamed abuse at people coming and going, with a guard of cops standing in front of them.

Coming in, their anger had some bite. Leaving, it was pitiable.

“Wall Street, the insurance companies, drug companies, fossil fuel industry, military industrial complex, the whole damn 1%” bellowed Bernie, “the question we’ve got to answer: are we prepared to stand up to them and transform this country?”

He left the stage, electric, to the chunky power-riff of “Back in Black,” and Brian Johnson belting out: “FORGET THE HEARSE, CAUSE I NEVER DIE.”

Could a Bernie Sanders-style politician succeed in Australia? Send your thoughts to [email protected]. Please include your full name for publication.

The people of Australia are crying out for good leadership, we see only a daisy chain of political apparachiks on both sides who are there because it is a career objective to get their bum on a ministerial seat and cop a fat pension for life. The landscape is devoid of anyone with genuine leadership qualities. Filtered through the mesh of the IPA or the party machinery or the union moverment there is no fire left in the belly or genuine desire to make the place better for the many. The main game is pandering to the 1% that donate to political campaigns.
All Aussies would immediately recognise a genuine leader if one appeared on the horizon and they would support in great numbers, problem being there isn’t one.

Aussie politics thankfully seems to be the reverse of the US model – here you have to get your party into power first, then there is a chance to become a superhero afterwards.
A Sanders, or a Corbyn, or an Ardern, is not likely to work here until someone like a Gillard has had time to reverse some of the neoliberal damage and thus give people some hope that politicians of a decent stripe can indeed do good for our society.
It would help if the average voter could turn off the commercial TV, eschew the Murdoch rags, and educate themselves a little about how politics should work….maybe even get involved and forget their selfishness and greed for a little while.

As I recall Trumpers did want to run AOC and a few like her out of the country. I know it’s a US story but it’s for an Australian audience so please spare us that grating Americanism – POC.

Pardon my ignorance, but what the hell is POC?????

And the only decent politician in this country is one PENNY WONG! How I wish she could be persuaded to move to the lower house and into the leadership of the ALP!!!!

Could a Bernie Sanders-style politician succeed in Australia?
He did and we all know what happened to Gough.
That is a lesson that is still reverberating in politics today.

I think we would recognise such a leader pretty quickly. We may get behind them, but as the ultra-small minds dominate discourse in this country, and probably are in the actual majority (quiet Australians), and as the conservative baby boomers also dominate in the minds of politicians, they would likely get nowhere or be run out of town.

Our biggest problem is that neither party would allow them through their sausage machine.

We really need a new party of the centre-green-left to be able to produce a Bernie equivalent. The solidarity of the Labor party, right for its time, is now its Achilles heel.

The labor party, the progressive party, the timid party, the appeasement party, the cautious enlightenment party. Only thing worse, the coalition juggernaught of the quiet Australians led by a cranky, boring, God bothering, PR spiv who stares at empty dams and pretends to swill beer.