Following the ABC's latest expose on the dark side of horse racing, enthusiasts and industry figures like Alan Jones have come out swinging in the sport's defence.

The ABC’s recent investigation into the mistreatment of retired racehorses proved something of a tipping point for Australia. But like similar greyhound and live export revelations, the report has also led to many in the industry twisting themselves into knots to try to defend their business.

Others at [the ABC] are out there trying to ruin the lives of others, and we pay for this to happen. Alan Jones

Surprising no one, ABC critic, noted racing fan and 2GB broadcaster Alan Jones, came out swinging on his radio show and a Daily Telegraph column about the national broadcaster’s “unambiguous and biased attack on horse racing”.

He criticised the ABC’s alleged mischaracterisation of one horse’s fate, suggested activists could have provided edited footage, and went to great — often irrelevant — lengths to defend NSW Racing (all of which the ABC has responded to here).

There’s no people that look after their animals better than what the thoroughbred people do [and] to take one or two people who did the wrong thing is completely unjust. Racing NSW CEO Peter V’landys

Another of Jones’ favourite arguments: owners love their horses, and those who treat them badly are just bad apples.

I’m not sure [7.30] is particularly robust in those numbers. Racing Victoria chief executive Giles Thompson

The number of horses sent to abattoirs is still in question: neither the racing industry nor the ABC can offer a definitive number of where horses end up after they retire and go into the “broader community”. The ABC has, again, explained its numbers here.

The argument that Australians are much worse to humans than animals — echoed here by Herald Sun cartoonist Mark Knight — falls back on the idea that people can’t care about two things at once. 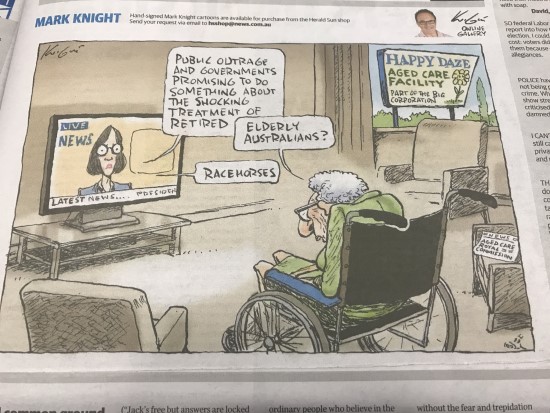 I must say I get fed up with the use of the term “Industry” in relation to animal racing sport be it dogs or horses. It is used mainly by people attempting to give their business legitimacy. In my opinion an “industry” is an enterprise that actually produces something useful. I suppose in that regard it produces entertainment but mainly pet food and gambling revenue if you consider these useful. !8000 thoroughbred horses bred each year of which only a handful make any money the rest go to pet food…very industrious.

Totally about the international gambling cartels, they control and run racing in Australia.

Who cares what the likes of Alan “Toilet Loiterer” Jones says or thinks?