Almost $27 million has been spent on the facility this year, and the Biloela family are the only people housed there. So why are the conditions so bad?

Almost a month ago, the Biloela family was told it was crucial their youngest daughter gained at least three kilos in weight.

Doctors working for International Health and Medical Services (the company contracted to supply medical care inside Australian detention centres) observed that 28-month-old Tharunicaa’s weight hadn’t increased in four months, since she had surgery to remove four teeth which had become chronically infected due to severe vitamin deficiencies and a lack of sunlight.

Tharunicaa’s mother, Priya, often had to pre-chew food, because her daughter’s mouth was too sore. The family say they were not supplied with food soft enough.

This was before they were sent to the newly opened detention centre on Christmas Island.

The family have since told Crikey that Tharunicaa’s appetite decreased dramatically after the government’s failed attempted to deport them from Australia in late August. In extensive translated interviews, they also say their living conditions have worsened since being housed in the facility on Christmas Island. 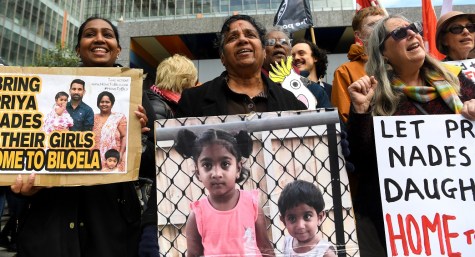 This is the same facility that currently employs more than 100 staff and, from February to August this year, has incurred $26.8 million in administrative expenses. Australian Border Force did not respond to questions from Crikey before deadline asking for clarification if this figure was separate or additional to the $185 million that it cost to re-open the detention centre. Either way, it is a sizeable sum for a facility that currently only houses the family of four.

Is one of those 100 staff members a nutritionist for Tharunicaa? In early October, Crikey submitted questions to the Department of Home Affairs, asking if the family had been consulted and provided with food to assist with the toddler’s weight gain. Had a nutritionist been consulted?

A Home Affairs spokesperson replied: “The family has been comprehensively consulted throughout their time in immigration detention, in both Melbourne and Christmas Island, about their food needs and preferences.”

“The catering arrangements for the family in Christmas Island have been refined in consultation with the health service provider and the Serco onsite catering manager.”

“I am allowed to cook so I try to make something she likes from the food we are provided with,” Priya says. “But the only additional food we have been given was from a visitor.”

Priya says she also has problems making kindy lunches as the family is given only one loaf of bread per week. She says neither child has been supplied with a lunch box for when guards take them to attend pre-school outside the detention centre.

The family can no longer video call from their phones, because they are not given access to wi-fi, but they have described their accommodation to Crikey.

They say the four family members currently all share one queen-sized bed. There is another room the toddlers could sleep in, but they say it is located in an adjacent cabin that makes it hard to easily hear or access the girls. They also say the room isn’t safe, as they have seen a scorpion and mosquitoes.

In Melbourne, their detention unit was more like a house (though they were still under guard and monitored), but on Christmas Island they say the cooking facilities, dining areas and computer room are separate and at some distance from the room they sleep in.

Priya says the family have no privacy and they are constantly surrounded by guards filming them with body cameras. Both parents raised concerns for their daughters’ mental health and say their Australian-born children have none of the things they were familiar with. They say the girls can’t watch Play School, as the TV in the dining area does not appear to have children’s shows.

On October 1, the UN asked the Australian government to remove the family from the detention environment within 30 days. This was shortly after the Federal Court in Victoria found the family had a prima facie case to stay in Australia; the family will receive a full hearing at a date yet to be announced.

The UN request is non-compellable, but the family’s lawyers have pointed out that it’s preferable to consult with their clients in person or without such stressful conditions.

Crikey submitted more questions to Home Affairs last week, including what the department or their contractors pay for the single loaf of bread the family say they receive weekly.

We received no response before deadline. 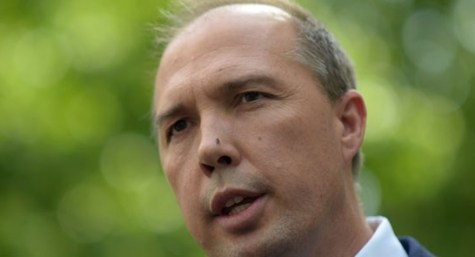 Nothing the Department of Home Affairs makes much sense, except if you view it from the point where every penny spent upon them will loaded onto their shoulders, if they become citizens.

I personally think that cruelty is the name of the game, and Dutton and his able sidekick Greg Moriarty, like nothing more than destroying the psyche of someone. I also think that someone in the AFP, has made promises to someone in the Sri Lankan government regarding their return.

yes Pezzullo is the man . Hes the one with the disdainful look at senate inquiries and takes pleasure in persecuting a young sri lankan family. Hes got the job as long as the coalition are in power. Hes obviously done well since his parents or grandparents came to Australia as immigrants.

You have made an assumption about Mike Pezzullo’s parents or grandparents. Before you draw a parallel for debating points, can you let us know if his parents/grandparents arrived here legally or illegally?

In case any Australian is unsure of what they are giving up through the actions of their elected representatives.

I would like to engage this family’s PR team – they are doing a wonderful job – I have never known anyone with a long string of Court losses to still command such an enthusiastic following – with the legal analysis already on record to quote a phrase from another article in Crickey to-day “a truck of commonsense” shows they have been gaming the system.

Yeah they really lucked into the having teeth fall out as they wait for their 1 loaf of bread a week in their offshore prison. Totally gaming the system for these fabulous rewards.

Court losses aren’t the same as a fair go or justice. Nor do they excuse poor treatment. The duty of care principle must always be the overriding consideration when people are in care, whether they are incarcerated or voluntary. This is even more so for children who are completely involuntary participants in this cruel farce.

The two cost amounts quoted in this article are almost exactly the same as the arts funding total for all of Australia in last week’s arts article. Why not just billet them on the island or put them up at a hotel or just leave them in Biloela. After all where are they going to run to ?

Desmond D…i’ve known of a lot of personality celebrity footballers, jockeys,..watch this face tv faces,, ad infinitum ad absurdum ad nauesium etc, ….you can name whatever truckload of commonsense gibberish you like ..who have gamed the system far better than these people and are ‘rightly’ held as national heroes and role models…justice n truth are as good as long as you can get away with it .and you should be grateful for that..

Evidently Dutton & Co don’t believe the Biloela family has suffered enough. It comes as a surprise they haven’t been forced to wear hair shirts for ‘border security’ reasons.

On Remembrance Day let’s reflect on our deceased ancestors & ponder if this is the Australia for which they fought.

Careful there, Yasmin. The News Narks will be all over you.

Yet another example of unnecessary government secrecy.
Exactly what food is provided to detainees? Is there access to sunlight outdoors etc? Why shouldn’t we know?
As they say, if you’ve got nothing to fear, you’ve nothing to hide.